The Intermediate Level of the Authentic Ba Gua Zhang Online Learning Program focuses on the core forms, techniques and methods, which are the “heart” of the art of Ba Gua Zhang.

The Intermediate Level is a natural continuation of the Foundational Level of the Authentic Ba Gua Zhang Online Learning Program. 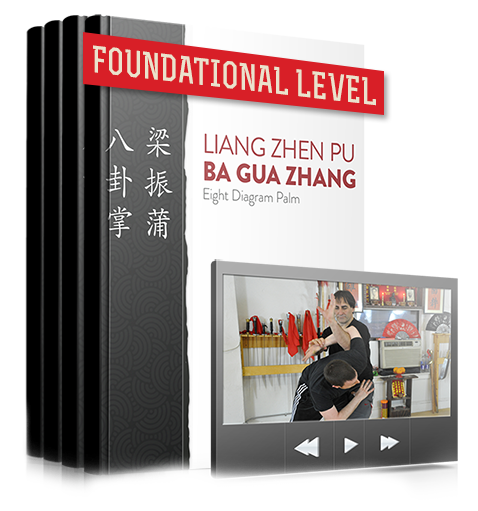 I’ve been studying Ba Gua for over a decade from various teachers and I wanted to let you know that your Distance Learning Program is the most comprehensive, in-depth and, most importantly, easily understandable, Ba Gua teaching that I have ever come across. You are a master teacher with that rare combination of having top-notch skills AND the ability to effectively teach those skills to others.

Provides the perfect balance of theory and practice presented through written material and video.

Over the web and/or through the Gumroad app. On your phone or tablet, watch all the videos through Gumroad’s free app (available on both IOS & Android).

You can grasp the essence of Ba Gua without a teacher present.

Development of both health and self-defense skills.

We will provide different discounts for upcoming seminars in the US & Europe.

The two core movements which are the root of all other changes and techniques.

The Eight Palm Changes and their many applications. Each of the Old Eight Palms trains a unique strategy, contains different footwork, and emphasizes different body and hand actions.

These Eight Single Linear Movements are practical linear expressions of the Eight Palm Changes, and are the foundation of the 64 Hands (64 Linear Forms).

Eight methods of performing the Single Palm Change. Each method manifests a different Jin and corresponds to the energy configuration of a particular Yi Jing Trigram.

An advanced method of Nei Gong that strengthens the bones, consolidates the marrow, and relaxes and invigorates the soft tissue.

Real training in Ba Gua Zhang as it is taught in China today!

How is the Ba Gua Zhang Distance Learning Program delivered?

With both the Foundational or Intermediate Level Online Learning Program, you will receive a detailed welcome letter with training guidelines, books in PDF format, student manual, online access to more than 200 videos (streaming only), if you enroll in both programs, and extra PDFs with additional information on specific topics. Bonus materials will be added periodically.

What Style of Ba Gua do you Teach?

How long will the videos be available?

The videos will be accessible indefinitely. We are committed to maintaining your ability to gain access to them.

Can I get DVD’s of the material and/or are the videos downloadable?

At this time the videos are only accessible through online streaming. We chose to do it this way to keep costs low and to make the material easy to access for students all over the world.

Why do some of the videos have no sound?

Many of the videos have no sound or voice-over. This is deliberate, so that you can simply follow the movements without listening to someone talk. This is similar to training in China, where you first learn the movements by following the teacher and only later have an opportunity to ask specific questions, often in a different setting – over a meal or a cup of tea.

The detailed information on alignment, structure, lines of power etc. is provided in the PDFs.

What Style of Ba Gua is taught in the Distance Learning Program? Is it Gao Style Ba Gua?

What Style of Ba Gua do you Teach?

In 2011, Tom Bisio and members of New York Internal Arts also began to train with Master Zhao Da Yuan. Master Zhao is one of the original group of disciples who trained under Li Zi Ming, as well as the inheritor of a rare family system of Qin Na (Chin Na). 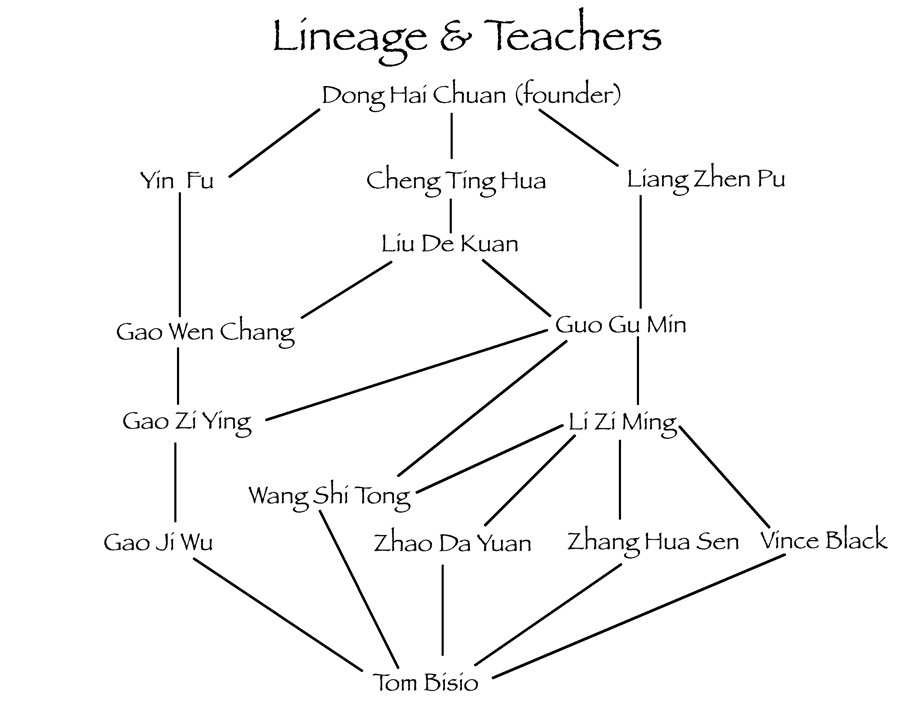 I notice in the Student Handbook that the forms and exercises seem to come from different teachers rather than a single teacher. Why is that?

In learning Ba Gua I studied with five different teachers who are connected to the Liang Style Lineage in one way or another. Many of them taught the same forms, but often with different movements and names and they all taught things in a different order, often according to the individual student’s capability, interests and needs. As all my teachers were very proficient, I consider each to be correct in his presentation of the material, but I also understand that each had, or has, his specialties, preferences and predilections, as well as his own unique physical attributes. Therefore, in my own training, I looked carefully at what each set of exercises or forms was supposed to develop and which expression of the those forms and movements efficiently produced that development. These are the forms that have gone into the New York Internal Arts Curriculum and the Distance Learning Program.

I learned basic exercises drills and locks and throws from Zhang Hua Sen, who broke down the 64 forms, 13 elbows and other forms. Some of Zhang’s applications came from his background in Shuai Jiao and from his physicality as a former Chinese opera performer. With Vince Black I refined the exercises and basics and worked on variations. Wang Shi Tong also broke down forms move-by-move with applications. He also taught variations of the forms I learned from Zhang – although Wang’s applications tended to be simpler and more direct. I have learned both Lao Ba Zhang and Ba Gua Lian Huan in three different ways from three different teachers. Although the structure and basic principles of each version were congruent, I found Wang Shi Tong’s expression of Lao Ba Zhang (Old Eight Palms) and the Eight Single movements that relate to the Eight Palms to be the most clear and succinct and to most efficiently develop the requisite body skills. Later I relearned yet another version of Lao Ba Zhang from Zhao Da Yuan, and gained deeper insight into his ideas about the form and other applications of the principles.

Similarly, I found Gao Ji Wu’s expression of Ba Gua Lian Huan to be the version that most clearly develops the skills of linking movements smoothly and introducing Swimming Dragon Body shen fa.

From Zhang Hua Sen I learned the fundamentals of the 7 Star Stick, from Gao Ji Wu the Staff form and the big Saber (Da Dao) – the Ba Gua Slicing Saber – while Wang Shi Tong taught the actual usage of the Saber through his 64 Ba Gua Saber.

All of these influences are integrated into the curriculum of the New York Internal Arts classes and the Distance Learning Program.

Can I email Tom Bisio directly with questions about my training?

The Foundational Level Online Learning Program develops the base level skills and body attributes that serve as the foundation for more advanced training. The Foundational Program focuses on basic Ba Gua Nei Gong methods that efficiently inculcate key internal skills and attributes into the body. The most Important of these methods are the 28 Foundational Exercises, the Twelve Standing Postures, and Ba Gua Circle Walking Nei Gong.

Can I go Straight into the Intermediate Level Online Learning Program?

Yes you can. We expect that some of you have sufficient background in Ba Gua Zhang, or Internal martial arts in general, to be able to go straight into the Intermediate Level Program. Proficiency in internal arts like Ba Gua Zhang is largely dependent on developing a solid foundation, so if you have not acquired the basic skills and attributes, we suggest beginning with the Foundational Level Online Learning Program. If you have been diligently training in the Foundational Level Program for 18 to 24 months, or done equivalent training elsewhere, you are ready for Intermediate Level Training.

One can of course purchase both programs together, which not only gives you an overview of the all the key elements of Ba Gua Zhang, but also allows you to interweave and cross-train the Foundational and Intermediate material simultaneously.

Will everything listed in the Student Manual be covered in the Distance Learning Program?

No. That would be an impossible task, as it is simply too much material to cover adequately in a distance learning program. We will cover all the key elements that develop real skill in Ba Gua Zhang.

Yes you can upgrade by paying the difference between the programs at their full price – $102.00

Should I choose the Standard or the Complete Foundational Program?

This is really a personal decision. I recommend the Complete Program, but if cost is an issue, than the Standard Program offers another option.

What if I want a refund?

If you want a refund, let us know within 7 days and we will give you a refund, minus a $75 administration fee. The exclusive PDFs worth over $100 in hard copy format are yours to keep.

Can I pay in installments?

Unfortunately that is not possible. When you purchase the program, the whole program is delivered to you. There is no way to deliver a partial program or to process partial payments.

Is this Distance Learning Program suitable for children and teenagers?

There is the exceptional young person who might be a natural fit with an intensive program in internal martial arts. However in general, in China an intensive program in internal martial arts is not considered suitable for people so young. This is not because a young person cannot learn Tai Ji, Ba Gua or Xing Yi, but because at this early stage of growth and development, arts that open up and exercise the body more are more suitable – the Qi needs to move outward more than it needs to consolidate inward.

Generally people under 17 to 19 years of age, focus more on other so-called “external arts.” Even if they learn some Ba Gua, some time is spent on stretching, stance work, strength development, and arts that open up the body such as San Huang Pao Tui, Long Fist, Tam Tui, basic weapons sets, Shaolin training sets, Lohan, etc. This creates a firm foundation in Chinese martial skills and internal practices are then slowly added and eventually become the complete focus.

This approach is considered healthier and more in tune with the natural life progression.

The movements and applications shown in these videos and demonstrated or described throughout the Authentic Ba Gua Distance Learning Program may be too strenuous for some individuals and can be dangerous and cause injury.

Before embarking on this program, or practicing any of the physical movements and activities described in our books, videos and other educational material, you are advised to consult a physician to determine your suitability for performing these activities.

Any health benefits attributed to these movements and exercises, whether mentioned or inferred, are not advocated or promised by Tom Bisio, Internal Arts International, New York Internal Arts and The Authentic Ba Gua Distance Learning Program. Any health benefits, whether mentioned or inferred, are those typically attributed to these movements and exercises in traditional Chinese culture. We neither endorse nor advocate these benefits and opinions, nor do we vouch for their veracity. They are presented for educational purposes only.

Tom Bisio, Internal Arts International, New York Internal Arts and The Authentic Ba Gua Distance Learning Program are not responsible in any way for any injury or illness that may result from attempting to perform the exercises and movement demonstrated or following the instructions contained in any of our videos, written materials or online discussions.