This is Part 2 of this article, read Part 1 HERE. 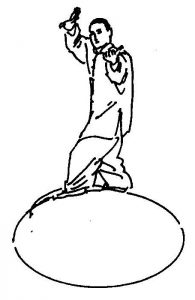 The Spear Upholding Posture is sometimes called Lion Opens Its Mouth or the Lion Stretches Open its Mouth. It is like holding a spear with the tip pointing downward toward the opponent’s knee. Master Sun Lu Tang also refers to this posture as White Ape Draws the Saber. Master Sun associates this posture with the Heaven Trigram, consisting of three unbroken lines. When holding this posture, Qi extends outward with the inside and outside, the upper and lower body all acting in unison. When practiced smoothly, the body’s blood circulation will be unobstructed and one’s strength will increase. [1]  Though the mouth [of the Lion] opens wide, as if holding a large Ball,one must sense to seal and collect Qi below. [2] The Spear Upholding Palm is said to open the Kidney and Heart channels (Shao Yin) and their corollaries, the Bladder and Small Intestine channels (Tai Yang).

Song of the Spear Upholding Palm

Hold up the spear, rotate and grind the millstone,

Extending the back opens the kua for smooth steps. 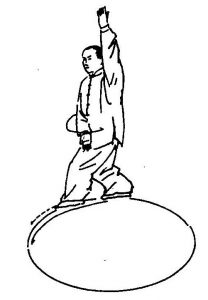 The name of this palm can also be translated as Heaven Pointing Earth Piercing Palm. [7] In this posture, one hand pierces downward just outside the thigh, while the other points upward. Both arms spiral and twist so that the whole body is twisted like a rope. The lower hand pierces downward to face forward toward the center of the circle, while the upper hand spirals upward to face backward, away from the center of the circle. This opposition creates a Yin-Yang balance of forces that passes through the entire body. Master Sun Xi Kun said that this posture twists the bones and sinews around the body’s center. [8]

Point to heaven and draw on the ground extending upward and downward,

Go forward with one yin and one yang.

Slacken the yao, sit the kua, raise the knee and leg,

Inside straight, outside hook, when moving forward brush the ground. 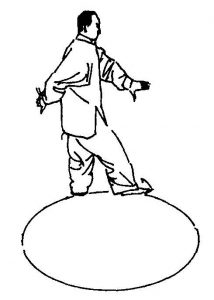 The Yin Yang Fish Posture is like the Tai Ji Yin Yang symbol, in which the white (Yang) “fish” and the black (Yin) “fish” are endlessly transforming and interchanging. The arms curve to form the shape of the Tai Ji Yin Yang symbol. The outer arm is high, and the inner arm low, with the palms facing outward – one forward and one backward. In Yin Style Ba Gua this posture is associated with the Bear.

One in front, one behind, yin yang palms,

Striding step, empty and solid should be distinct. 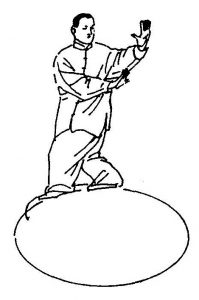 This posture is also called Green Dragon Extends Its Claws, or the “Pushing Turning Palm.” In some styles it is associated with the Dragon. The hands are in the “Tile Palm” position, in which the hand is curved but the forefinger is straight. The forefinger of the inside hand is at eye level. The eyes regard the forefinger of the inside hand, or look through the Tiger’s Mouth (Hu Kou), the circular space between the thumb and forefinger. The outside (rear) arm is close to your body and curves, so that the forefinger points at the elbow of the inside (front) arm. There is space under the armpits, and the shoulders have drawing inward force, while the elbows sink and drop. The head pushes upward and the chest is soft. There is a sensation of opening inward and closing outward.

Song of the Millstone Pushing Palm

Pile the back elbow first and protect the heart with the elbow,

Following to the front elbow with wrapping-embracing force.

Front and back hands, and one spirit united. 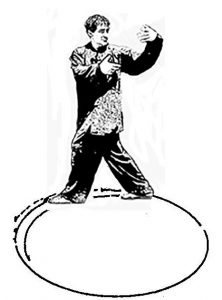 The Universal Palm (Yu Zhou Zhang) is essentially a neutral position that is a fusion of the other 9 palms. It is both a point of departure for the other palms and a unification of their energies. This palm is sometimes called the Moon Embracing Palm (抱月掌) Bao Yue Zhang, and under this name it is one of the Eight Basic Palms of Beijing Gao Family Ba Gua Zhang as taught by Master Gao Ji Wu. It is also called the “All Round Posture.”

The Universal Palm body pattern allows one to gather strength with minimal physical effort. The Universal Palm is composed of interlocking and interconnecting circular forces – it has no beginning and no end. In walking and circling, and changing directions while holding the Universal Palm position, one resides in stillness at the pivot between the palms and changes.

Embrace the moon in two hands like holding a baby,

Hold in the chest and erect the upper back like tightening a rope.

Slacken the shoulder and drop the elbow for a flexible wrist,

In a form like an ape-monkey picking the fruit.