Start with feet together and arms and hands hang naturally by the sides.

Step the left foot out so the feet are under the hips:

Yi Jin Jing aims a building up the constitution. It is also the foundational exercise for learning to emit Qi (Wai Qi). Yi Jin Jing should be practiced once or twice daily. First learn the postures and movements and the add the coordination of the breath and Mind-Intention.

The repetitions can be increased gradually. Older and middle-aged people should be careful about letting the Qi go upwards during practice, or if they have high blood pressure should avoid it entirely. The lifting heels can be omitted if this headache, dizziness or high blood pressure occur.

The hands in reverence before the chest,

Settle the Qi, gather and restrain the Spirit,

Heart-Mind is clear and reverent.

Turn the hands into yin Palms (facing the ground) and slowly lift them up to shoulder level. Turn the hand into Yin yang Palms (palms face each other) and bring them together in front of the chest. The two Shaoshang (Lung 11) acu-points gently touch each other and the fingers point upward. The shoulders relax and the elbows drop. Breathe in Dantian so that Qi gathers there. Hold this posture for several minutes.

While holding this posture, follow the flow of Qi and as you inhale guide Qi so that Qi flows out of your fingertips, enters the nostrils and descends to Dantian. As you exhale, guide Qi from Dantian to the chest and along the three yin channel of the hand (Lung, Pericardium and Heart) so that Qi flows into the palms.

The two hands are level and open outward,

Heart-Mind and Qi balanced and still,

Eyes and mouth open wide as though stupefied.

Turn the hands into yin palms (palms facing the ground), as you extend thearms out to the sides at the level of the shoulders. Simultaneously lift the heels and stand on tiptoe. Concentrate the Heart-Mind and look straight ahead with the chin gently drawn in and the back straight. Breathe naturally and concentrate the mind on Laogong (P 8), in the center of the palm, and on the toes. As you fill inhale and fill Dantian, concentrate on Laogong. As you exhale concentrate on the toes. 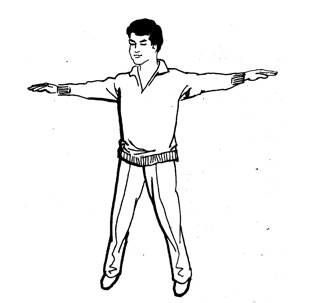 Look upward and hold the heavenly gate in the palms,

Stand upright on the ball of the foot,

The teeth are clenched tightly,

The tongue presses the palate and saliva gushes out,

Breath through the nose and the Heart-Mind is calm, 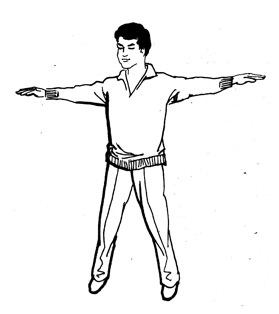 From the previous exercise, inhale and move the hands upward in an arc as you turn the palms upward to become yang palms (palms face upward). The arms form and arch the fingers of the two hands point toward each other just above the Tianmen ( 2 cun superior to the font hairline). acupoint as if holding the heavenly gate. Lift the heels and stand on tiptoe, moving the heels slightly outward so as to close Huiyin (Ren 1), while opening the Huiyang (BL 35). Gently clench the teeth (tongue tip still touching palate). Use inward vision to gaze through Tianmen at the space between the hands.

Make fists and let the arms follow the same arc they rose along to reach the position from Exercise Two: Yin palms with arms extended out to the sides at the level of the shoulders. Simultaneously exhale and guide Qi to Dantian, As you exhale fix the Mind-Intention on Dantian. As the palms raise to repeat the exercise inhale and Mind-Intention shifts to the palms. Repeat the exercise several times.

One palm holds the up the sky overhead,

Gaze calmly at the inner palm,

Inhale through the nose and exhale thorough the mouth

Exert strength between left and right with the eyes.

Slowly lift the right hand until it is just above and in front of the forehead. Simultaneously the right hand forms a fist and lowers until the back of the fist rest on the left side of the small of the back. Focus your gaze on the right Laogong. While concentrating the Mind-Intention on right Laogong, connect inner Laogong (P 8), in the center of the palm, the two eyes and outer Laogong (opposite P 8 on the back of the hand) on the left hand. As you inhale and exhale the small of the back fluctuates between concave and convex. 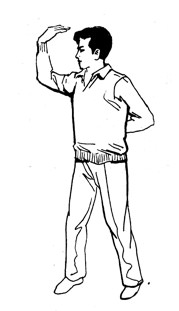