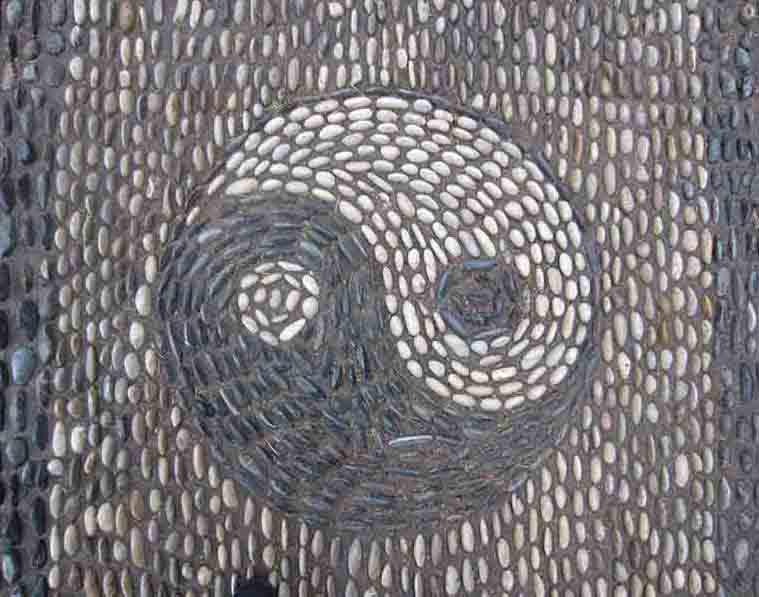 In Daoism Xing and Ming are two interrelated concepts that can be understood in a variety of ways. Xing and Ming represent not only two different aspects of the body/mind but also two different modes of self- cultivation. There are two main difficulties difficulties in understanding Xing and Ming. First, the literal meaning of Xing and Ming, words when translated into English doe not always reflect how one Xing an Ming are understood in the Daoist tradition. Secondly, even in the Daoist tradition, there is inconsistency into how these terms are used. Ming 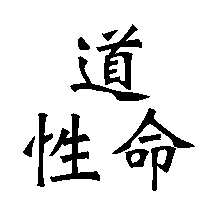 Ming can mean “life”; “destiny” or “fate.” It refers to an individual’s existence on earth – one’s lifespan. Ming can also mean to cal out or to hail. The character for Ming is essentially Ling (令 command) with the mouth radical (kou 口) added. Ming Ling (命令) together can mean, “to order,” “command” or “directive.”

Xing can denote the nature, or quality of something; it’s “-ness” or “-ism.” In this sense Xing can be used to refer to sex or gender. Xing also refers to something’s character or disposition, and its possibility. Xing is comprised of忄(from 心 xin – “heart”) and 生 sheng (“birth” or “life”).

In Daoist thought, Ming (vital force, life, or destiny) is understood in relation to Xing inner nature; character; disposition; property; quality. The character for Ming is said to depict the two kidneys viewed from the back. [1] The character for Xing combines the radical for heart (Xin) on the left with the character for Sheng (“to be born” or “life”). Thus Xing refers to the innate nature of the heart-mind with which one is born (Pre-Heaven), while Ming can refer to what is acquired (Post-Heaven). Ming can also refer to the idea of self-cultivation, and Xing to what the person experiences from self-cultivation. One cultivates life (Ming) to realize one’s nature (Xing). Once Nature (Xing) is realized, one can know one’s Destiny or Life (Ming) [2]

In this sense, Xing refers to our inner nature. This includes both our instinctive animal nature and the human qualities we associate with our higher self. An important part of Xing is related to how we understand ourselves, our tendencies, openness, adaptability, and our ability to change and transform. Ming refers to our primordial Qi, the Yuan Qi (“Original Qi”). This is the same Ming as in Mingmen (“life gate”). Therefore Ming is associated with one’s life force and one’s existence, and even more specifically one’s lifespan, the duration of one’s life.

Ming and Xing also reference two methods or “schools of thought” related to Daoist self-cultivation. Xing Gong refers to self-cultivation, which employs quiet seated meditation to cultivate the mind, while Ming Gong trains the body through Qi cultivation exercises. Xing Gong. Ming Gong is sometimes referred to as You Wei 有爲 (doing) and Xing Gong as Wu Wei 無爲 (without doing). You Wei means to pursue something actively, or to have some outstanding achievement. Wu Wei does not mean doing nothing, but rather a doing that is completely natural, in which one does not go against the natural order of things. Although these two methods seem contradictory, they are really two sides of the same coin, like Yin and Yang. In this sense, You Wei and Wu Wei are complimentary and they are often employed in tandem.

Xing is related to the Yang aspect of the Heart and also with Qing (the emotions). The Li Trigram is often used to explain the interrelationship of consciousness and emotion. Li is connected to a person’s Shen (Spirit), which resides in the heart. The outer solid (yang lines) in the Li Trigram represent Xing and human consciousness while the broken, Yin line in the center of the Trigram represents the emotions. In Daoist meditation through stilling the mind (consciousness) the emotions also become still and transform. This transformation of Yin to Yang restores Fire to its original Pre-Heaven, pure Yang state represented by the Qian (Heaven) Trigram. 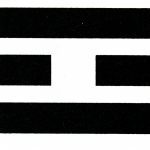 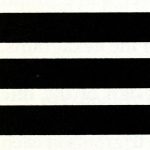 Ming is sometimes view as the Jing (Essence) of the body, which is stored in the Kidneys, but it is also associated with the Original Qi or True Qi, True Yang Fire within Yin Water. When Ming is properly cultivated, Jingqi is transformed in to spirit, which homes to heart. This is another way of understanding the conversion of the Li Trigram’s broken central line to a Yang, unbroken line. Simultaneously this allows the conversion of water to its original Pre-Heaven, Yin state, represented by the Kun (Earth) Trigram. 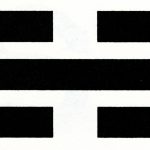 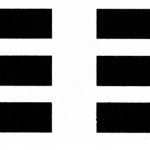 This “return to the Pre-Heaven State” in turn represents a return ones True Nature (Xing) and True Destiny (Ming). Liu Yi Ming (1734–1821), an important figure in Daoist Internal Alchemy was master of one of the northern branches of the Longmen 龍門 (Dragon Gate) lineage. Liu describes Xing (Nature) as one’s authentic inner nature and Ming (Life; Existence) as one’s individual life as a human being, including one’s function or “destiny” in existence as a whole. In an individual’s Post-Natal, Post-Heaven existence, one’s True Nature is obscured or clouded over by the emotions and one’s false personality, and one’s True Life, or True Destiny is hidden by merely following the course of one’s life. Nei Dan inner alchemy practices emphasize inverting the course, so that one returns to one’s True Nature and True Destiny.

Chapter 16 of the Dao De Jing mentions Ming in this context of inversion and returning to an earlier more natural state.

Each returns again to its root.

Returning to the root means stillness

This is called reverting to one’s fate (Ming)

Reversion to fate is called constant.

All things flourish, but each reverts to its roots

To return to the root is called quietude,

Which means to revert to one’s destiny

He Shang Gong’s version of the this passage is:

All things together rise,

We thereby see their return

Now the full bloom of things, everything returns to its roots

To return to the root means to rest

This is called return to life

The return to life is called lasting eternally [4]

He Shang Gong’s commentary on this passage adds:

Everything without exception withers and dies. Everything returns to its root and then revives. Rest is called the root. The root is peaceful and pliant. Modestly it remains below. Therefore it does not return to death. To be quiet and peaceful, this is called to return to life and thereby not to die. If one is able to know how to walk eternally in the Dao, then one is illuminated. [5]

Over the course of time Daoist Internal Alchemy developed two main emblematic modes of self-cultivation. The first, related to Xing, is based on cultivating the mind, with the intention of removing the blocks that prevent one from seeing one’s True Nature. The second, related to Ming is based on purifying various components of the body, increasing one’s life force (Jingqi) in order to extend one’s life. Part of this focuses on cultivating the mind and spirit. [6]

Understanding and cognition emerge from the mind: with thoughts and cogitations, the mind yokes the Xing. Responses and reactions emerge from the body: with speech and silence, with sight and hearing, the body burdens the Ming. It is because Ming is burdened by the body that there are birth and death. It is because xing is yoked by the mind that there are coming and going.

Practitioners of the internal martial arts generally begin by focusing on Ming, and in the course of strengthening the body and refining it energies engage with Xing. With time, the mental, spiritual component of the arts assumes equal importance.

Shenque (Gate of Spirit) and Mingmen (Gate of Vitality) acu-points (both acu-points are diametrically opposed, one located in the middle waist and the other in the middle of your lower back. Practice daily just one time in the morning. Shenque is an acupoint related to sexual functions (“Xing” in Chinese) of any human being while Mingmen is defined as is the master of the twelve channel networks. This exercise connecting two acu-points is called “Xing Ming” cultivation. Shenque acupoint belongs to the Ren Mai meridian (called also Conception Meridian), Mingmen to the Du Mai meridian (called as Governing Meridian). Ren Mai belongs to Water element; Du Mai belongs to Fire element. By combining these two acu-points, the Water and Fire elements are helping each other: Sex and Vitality are merging. [8]

However, in general, Xing and Ming are considered to be two aspects of the same practice and each leads to, and is dependent upon, the other. Chen Ying Ning, a Daoist from the Dragon Gate School summarizes this interconnection Xing and Ming succinctly: Xing and Ming are like an oil lamp. Ming is the oil and Xing is the brilliance of the flame. Without the oil, there could be no flame, but without the flame, the oil would remain unused. [9]

[3] The Classic of the Way and Virtue: A New translation of the Tao-te-Ching of Lao Zi as Interpreted by Wang Bi. Richard John Lynn, trans. (New York: Columbia University Press, 1999) p. 75-76.

[6] Daoism: Religion, History and Society Destiny, Vital Force, or Existence? On the Meanings of Ming in Daoist Internal Alchemy and Its Relation to Xing or Human Nature. Fabrizio Pregadio. (道教研究學報：宗教、歷史與社會 第六期No. 6, 2014) p.157–218.