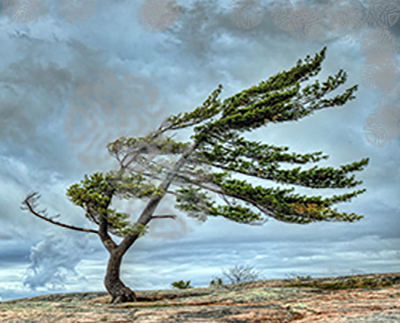 winter, cold. During the cycle of the seasons the energies of yin and yang change in their strength and proportions. Yang grows in the spring and flourishes in the summer, and then wanes in the fall as yin grows. Yin reaches its peak in the winter and then yang begins to grow and yin to wane after the winter solstice.

The warmth of spring manifests Heaven’s creative energies, as living things give birth and plants send out new shoots. Summer’s heat allows things to grow and develop so that they peak and can be harvested in the cool weather of autumn. As autumn progresses, living things wither and withdraw, returning to stillness in winter so the energy can be stored, conserved and concentrated in preparation for spring’s rebirth.

Under normal circumstances, the human body can easily adapt to seasonal climate changes. However if the climate change occurs in a form that is different from the normal pattern – a cold snap in spring or a warm spell in winter – it can be difficult for the body to adapt. This can also be the case if the change from one season to the next is abrupt and harsh rather than gradual. [1] Conversely, if the body’s resistance to seasonal change is reduced, due to injury, disease, emotional upset, declining vitality or a lifestyle that is not in harmony with seasonal change, then it may be difficult to adapt to even the normal seasonal climate variations.

The ideogram for wind (feng) is:

The ancient forms of the character for insect originally depicted a snake or a worm.[2] 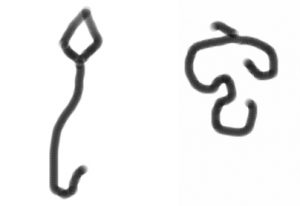 This association of insects with wind or air movement references the idea that: when the wind blows, insects are born.[3] Insects often appear suddenly as the seasons change, so in ancient times there was a notion that wind was the origin of insects. Additionally, insects and crawling animals have traditionally been viewed negatively as destroyers of crops and bringers of disease and pestilence. [4] In this context, we could expand the idea of “insects” borne on the wind to include microorganisms, parasites, and viruses that enter the body when the body’s resistance is lowered. The concept of wind as a pathological agent and the different winds manifesting in different seasons as different pathological agents is an important one in Chinese medicine.

Wind disease can manifest in many ways, and any illnesses that can be difficult to diagnose and treat are characterized as having a wind component. Wind diseases are characterized by sudden shifts and quick movement. Wind opens and disperses, gusting and transforming. Wind also tends to “carry” or combine with other pathogenic factors. There are two basic ways to view a wind disease:

One interesting facet of the ides of seasonal wind is that wind can enter the body and become fixed without any immediate symptoms. This creates a latent disease entity, which can manifest later often in the following season. For example summer heat can combine with dampness. It is contracted in the summer but can be precipitated into action by the climatic changes of autumn or winter creating flu-like symptoms that manifest in the fall or winter. When the disease manifests in late fall or winter it can be particularly severe, creating internal stagnation and accumulations that in turn create internal heat affecting the chest, intestines, and stomach. Similarly, cold that penetrates into the body in winter can linger and is then triggered by the energy of the liver and gallbladder rising upward and outward in the spring. This can lead to an acute fever in the spring, particularly if one’s resistance is lowered due to an irregular life style, stress, over-strain, emotional upset or irregular and inappropriate food intake.

As early as the Han Dynasty (206 BC – 220 AD), doctors of traditional Chinese medicine were aware that pathogenic entities can enter the body at a certain time and remain in a latent state, waiting for a favorable moment to manifest.

The meteorological factors of season and weather have a close relationship to human physiology. There are six environmental, climactic factors or “seasonal qi” that interact with living things and can have a profound effect on one’s health and well being. They are wind heat, dampness, summer heat, dryness and cold. They are also called the Six Evils, or the Six Pathogenic Factors (Six Pathogenic Qi), or more simply, the Six Qi.  If one is healthy one easily adapts to these changes in climate, but sometimes the environmental Qi is so strong that it overcomes the body, and causes illness as in the case of extreme heat or cold. Conversely, one can develop a diminished resistance to these changes. Then, even if the wind, heat, dryness, damp and cold are not extreme, one suffers from their presence in the surrounding environment. In either case symptoms one suffers often match the characteristics of the pathogenic Qi, because the Qi within us is directly connected to and resonates with the Qi around us.

Wind is often considered to be the carrier of disease into the body. This is because Wind has a pressure or force that penetrates into the smallest space entering the body through the pores of the skin, and the sensory orifices, eyes, ears, nose and mouth. Our ability to resist the wind is a product of the strength of our own Qi. However, unrelenting cold or hot winds can disrupt the harmony of even very healthy people. Anyone who has experienced the Mistral in France, the Foehn (a dry southerly wind which blows from the Alps across Switzerland and southern Germany), or the Sirocco knows that winds can blow day after day from the same direction, causing disruptive effects – headache, irritation, body pains, nausea and respiratory problems. In these places it has been known for generations that the winds bring feelings of anxiety, stress, depression and sleepless nights. Statistical studies show that when these winds appear, more road accidents happen and suicide rates increase.[7]

The Chinese view the penetrating nature of wind as the carrier of a “hundred diseases.” This notion incorporates to some degree the idea of the strength of pestilence and viruses and their ability to drive through the body’s natural resistance to disease. Often the nose, mouth and lungs are affected first, leading to sinus problems and respiratory diseases. Allergies, which are common in the spring, are also the result of wind’s ability to penetrate the body and carry in toxins and allergens.

Heat is yang and when it penetrates the body or is generated internally it attacks the yin substances like blood and body fluids, by moving them faster, or drying them up. Fire is simply a more severe form of heat – its extreme. The result of heat and fire are easily observed in a high fever where the pulse rate is accelerated so that the blood is pushed faster through the body, the mouth, lips, skin and tongue can become dry, and one can even become delirious or go into convulsions, as heat stirs up wind inside the body disrupting the normal smooth circulation of the Qi. On a more subtle level, heat can cause irritability, irritation and low-level inflammation. Diseases caused by heat pathogens usually occur in the spring and winter and attack the lungs first. Hence, the prevalence of flu symptoms in these seasons.

In the summer, heat is often referred to as Summer-Heat. Summer-Heat diseases usually occur after the summer solstice when heat has built up in the environment. Because summer is the hottest season, summer fevers can be severe, consuming the body fluids and disrupting the normal movement of the Qi, resulting in high fever, thirst and delirium. In the summer heat can also combine with dampness, because as heat pours down from above, dampness steams, or seeps upward from the earth.

Damp is thick and turbid (opaque, dense, and cloudy), like mucous. Damp is not easily transformed by Qi, so if it invades the body, or if other disease mechanisms produce dampness, it can be difficult to dispel. Dampness often disrupts the actions of the spleen and stomach in digestion, absorption and transformation of food and drink, which in turn weakens the Qi and the Qi Mechanism (the movements and functional activities of the Qi). Because dampness is thick it blocks the yang Qi and the Qi Mechanism, creating feelings of heaviness, distention and fatigue that may be accompanied by swelling.

Many arthritic symptoms are attributed to dampness lodged in the joints, hence their exacerbation during damp or rainy weather. Even dampness in the local environment, for example living in a damp basement or near a swamp, can produce these kinds of symptoms. Dampness often combines with summer heat in the period between summer and autumn.

After the early fall and the passing of Indian Summer, the weather becomes dryer. We see this dryness in the withering of plants and flowers and leaves drying out and falling to the ground. Although dryness is usually associated with heat, as late fall approaches it can become cold and dry. A dry climate usually affects the lungs, nose and mouth – areas of the body that require moisture to function properly. Therefore, bronchial problems, sinusitis and allergies are common in the fall.

Cold is associated with winter, but can occur in any season. Cold is considered to be extremely yin and therefore can easily injure the yang Qi of the body. The yang aspect of the Qi creates movement and transformation in the body. Yang Qi also warms the body and to some degree is part of our resistance to cold and other pathogens entering through the pores and the other orifices. Cold can enter through the skin and pores as well as the mouth, nose and ears and impair these functions of the Yang Qi. Cold constricts the pores and causes contraction, tension and pain in the muscles and joints. This contraction and stagnation can lead to a wide variety of symptoms, including arthritic pains, disruption of the digestive functions and accumulation of fluids. When the body is run down an individual is said to have a weak constitution, they can exhibit these same symptoms, including sensitivity to cold and lethargy. Cold can also combine with dampness.

It is important to understand that the effects of climate are not just seasonal occurrences. Living in a damp environment may lead to damp problems. A desert climate, or modern central heating in winter can create dry conditions in the body irrespective of the season, and a person who works in a freezer all day may develop cold arthritic problems. Many of the fur trappers of the frontier days developed severe arthritis in the legs later in life from a lifetime of wading into freezing mountain streams to trap beaver. [8] In modern life, cold pathogens are often prevalent in summer from over-exposure to air conditioning, or sleeping in front of a fan.

Because the direction of the wind changes throughout the year, for example the wind blowing form the North in winter and from the South in summer, the seasons themselves are often referred to as the four winds.[9]

[3] Feng: the Meaning of Wind In Chinese Medicine: with special attention to the acupoint fengchi (GB-20), by Subhuti Daharmananda Ph.D (Portland OR: Institute for Traditional Medicine) http://www.itmonline.org/articles/feng/feng.htm