What is Zang Fu Tui Na? 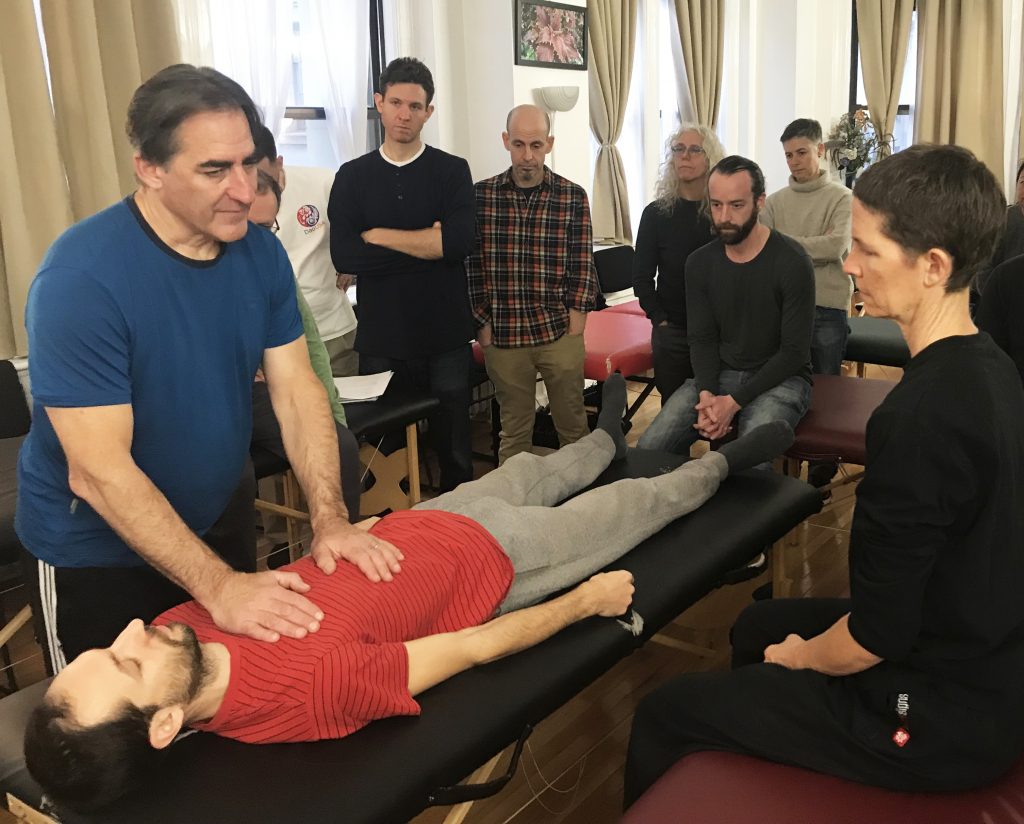 Two questions I have received many times in the last year are:

Answering these questions adequately requires a bit of a story that includes some of my journey through the world of Chinese medicine and its connection to energy practices like Nei Gong, Qi Gong, Daoist Meditation, and internal martial arts.

Zang Fu Tui Na is a unique approach to the practice of Chinese Medicine offering a direct, hands-on method of diagnosing organ imbalances, while simultaneously eliciting effective, immediate and profound changes in the body. Zang Fu Tui Na regulates not only the function of the internal organs (Zang Fu), but the whole body through both direct and indirect energetic visceral mobilization techniques. This important and rarely taught aspect of Tui Na can be more effective than acupuncture and Chinese herbs in immediately regulating the Qi dynamic, calming the Shen (spirit), and harmonizing the functions of the internal organs.

I came to traditional Chinese medicine through the gateway of internal martial arts (Nei Jia), which included the study of Traditional Tui Na and Zheng Gu (bone-setting) techniques, Qi Gong/Nei Gong, basic emergency acupuncture, and Gong Fu injury (Die Da) medicine. Later I went on to more formally study acupuncture and Chinese herbal medicine in school and through apprenticeships. During the course of my studies I was also introduced to osteopathic methods including Cranio-Sacral Therapy and Jean-Pierre Barral’s Visceral Manipulation techniques. I began to incorporate some of these principles into my work with Traditional Tui Na and Zheng Gu methods. Rather than being separate therapies that I added into Chinese medicine, the osteopathic concepts were easily integrated into the theory and practice of Chinese medicine, largely because to some degree, they are already contained within Chinese medicine, and its associated Nei Gong and Nei Dan practices.

Dr. Vince Black taught me traditional Tui Na/Bone-Setting and Die Da Medicine as part of my martial arts training. Dr. Black encouraged me to explore the relationship of these methods to Osteopathic methods like Visceral Manipulation and Cranio-Sacral Therapy. Working with Dr. Black in his clinic, I repeatedly saw how these methods were simply extensions of Chinese energy practices and medical techniques. In many cases I felt that Chinese medical theory offered better explanations of how and why the techniques worked. I also saw that “bone-setting” could be achieved by direct techniques or indirectly with soft energetic techniques. Although Dr. Black had studied with Jean-Pierre Barral, I regularly saw that Dr. Black’s manipulations of organs were more connected to his mastery of Tui Na and Bone-Setting and his knowledge of the movement of the organs gained from many years of practicing internal martial arts, Qi Gong and Nei Gong. In particular, Dr. Black gave me the keys to understanding how Qi Gong Movements directly influence the organs – not only energetically, but also through each organ’s  suspensory ligament system.  This approach has been, and continues to be, a huge influence on my understanding of both Chinese medicine and internal martial arts.

Later I went on to partner with Frank Butler, and together we taught “Zheng Gu Tui Na.” Our earliest interactions were a sharing of information. I had learned Tui Na and Zheng Gu from one Master of internal martial arts (Dr. Black), Frank had learned from another master, Kenneth (Kenny) Gong, famous in New York’s Chinatown for his martial arts and medicine skills. We compared hand techniques, theories and Zheng Gu Methods. Over years of teaching we also compared ways of manipulating the organs and together arrived at the five basic methods of regulating the organs in relation to one another through the Qi Dynamic:

From the five methods listed above, Zang Fu Tui Na began to evolve. Other influences were Jean-Pierre Barral’s work, which I studied briefly, a weekend of Basic Chi Nei Tsang with Karin Sorvik, as well as the whole body unwinding methods that I learned and assisted with in Dr. Black’s clinic, as well as intensive research and study of Seasonal Health and Seasonal Qi Gong based on the 24 Qi Jie (Solar or Seasonal Nodes) and their relationship to the Eight Winds as explained in the Ling Shu (Spiritual Pivot).

A seminal moment in the development of Zang Fu Tui Na was a brief meeting with Ba Gua Zhang and Nei Gong Master Xie Pei Qi in Beijing. Xie was also a master of Tui Na and an expert herbalist. As we were having tea in his sitting room, he pointed at the wall behind me where there were eight framed Chinese characters and said: “if you want to understand Chinese medicine you need to understand those eight characters. The framed characters were the eight movements of the Qi Dynamic: ascending, descending, entering, exiting, opening, closing, gathering (storing), and spreading out (dissipating). Working with this idea over a period of years while practicing Ba Gua Zhang, Xing Yi Quan, Nei Dan and Nei Gong, Tui Na/Zheng Gu, acupuncture and herbal medicine, eventually led to the development of Zang Fu Tui Na as it is practiced and taught today.

Another key moment was the realization the many chronic musculoskeletal problems emanated from disruptions in the Qi Dynamic of the internal organs – chronic neck problems that required regular treatment suddenly responded to release the suspensory ligaments of the pericardium and shoulder, and rib pain that changed completely through manipulation of the liver. This clarified the link between Traditional Tui Na techniques and Zang Fu Tui Na. 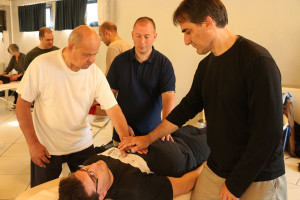 Over time, a deeper understanding Jin (refined force), an important internal martial arts concept, and its relationship to internal configurations of mind and body led to the discovery of specific hand formations that resonate with the internal organs and the five elements. These hand formations and their concomitant mental-physical internal energetic potentiation greatly enhance the effectiveness of treatment. 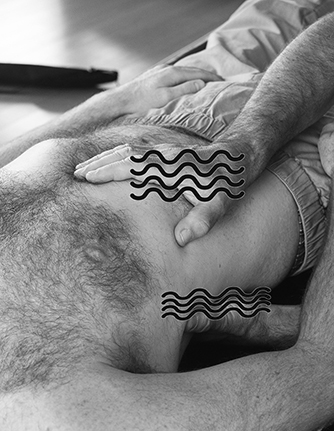 activities in terms of movement and employing this idea as the basis of all techniques and methods allows one to make profound changes in the body using the foundational principles of movement and life that underpin all of traditional Chinese medicine. Zang Fu Tui Na regulates and harmonizes the internal organs (Zang Fu) and their connected physical and energetic structures through the use of relatively gentle hands-on techniques. The main mechanism through which we regulate and harmonize the organs and their connected structures is the regulation and harmonization of the Qi Dynamic.

Each organ of the body has an intrinsic movement, and each organ moves in relation to the other organs. By directly or indirectly manipulating the fascia that binds and connects the organs (which can either inhibit or facilitate organ movement and functioning), one can make profound changes in the organ function and in the fascial system itself, which includes the channels and collaterals (meridians) and the other structures of the body that are energetically connected to the organs – muscles, bone, sinews, etc.

Zang Fu Tui Na is a Chinese medicine system of diagnosis and treatment that is based on the following perspectives:

Understanding visceral anatomy is crucial to learning Zang Fu Tui Na. One misconception in relation to Chinese medicine is the notion that Chinese physicians did not really know anatomy, despite the irrefutable evidence that anatomy was well know both from the perspective of centuries of warfare and the development of battlefield medicine, and from historical records of autopsies. In addition, the energetic functional relationships of the organs as detailed in Chinese medical theory show a clear knowledge of anatomy and the interconnectedness of the organs through fascial structures. Even a cursory knowledge of visceral anatomy reveals that many seeming “energetic” relationships are rooted in actual physical connections between the organs. And many students have remarked that understanding these connections is game changing.

ZFTN is easily integrated with acupuncture, Traditional Tui Na and Zheng Gu methods , Nei Gong and Nei Dan methods, and herbal medicine. One of ZFTN’s great strengths is that it provides a direct hands-on diagnostic of Zang Fu functioning that can compliment and confirm traditional pulse and tongue diagnosis. Another important aspect of ZFTN is that it allows the practitioner to understand the intimate connection of anatomical structure and energetic functioning. This has powerful ramifications for both diagnosis and treatment.

There are many techniques in Zang Fu Tui Na, however they can be grouped into six approaches, providing six levels of diagnosis and treatment that overlap, interweave and can be combined as needed according to the situation. This multi-layered structure allows the Zang Fu Tui Na practitioner to start almost anywhere as one level, or method, easily leads to another. Multiple layers of treatment and diagnosis also give the practitioner the flexibility to adapt to the needs of the moment, while keeping in mind long-range treatment goals.

Balancing the Qi Dynamic between the Upper, Middle and Lower Jiao

2.Regulating the Five Zang and Their Interactions

Abdominal Ba Gua techniques focuses on working around the navel area to diagnose and treat disorders stemming from pathological temperature differentials that create internal “Winds.” In Chinese medicine, Wind is the both the hidden cause and byproduct of many diseases. Wind diseases are not easy to treat with herbal medicine and acupuncture, but they can be dispersed by working around the navel, in eight peri-umbilical treatment zones that connect to the Eight Trigrams of the Yi Jing and the theory of the Nine Palaces and Eight Winds. Another benefit of the Abdominal Ba Gua treatment method is that it regulates digestion.

Global treatment protocols take into account multiple organ interactions and their structural and energetic actions with respect to Chinese medicine. These four protocols address the most common and seeming complex disharmonies that practitioners regularly encounter in clinical practice. 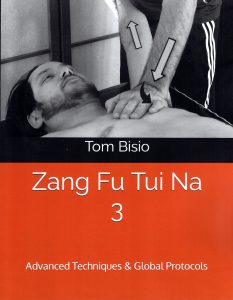 Some of these methods are detailed in the Zang Fu Tui Na Three-Book Series:

Although Traditional Tui Na and Zang Fu Tui Na are taught as separate systems, they should be viewed as a single integrated system of diagnosis and treatment that can address a large number of internal and external diseases. The Zheng Gu Methods and Hand Techniques of Traditional Tui Na are often thought of as being limited to treating external “orthopedic” problems. In reality, these techniques can be used to address the deepest levels of the body, including the internal organs. Similarly, Zang Fu Tui Na methods are often thought of as being limited to treating internal organ conditions and emotional imbalances, yet time and time again practitioners have discovered that lifting a dropped kidney effectively addresses that chronic, nagging ankle problem.

Zang Fu Tui Na integrates very seamlessly with acupuncture and acupressure. Direct manipulations of the organs go hand in hand with acu-points that engage with organ function through the Jing Luo (meridians). Points on the limbs can easily be used simultaneously with Zang Fu Organ Regulating techniques.

I see Zang Fu Tui Na as a work in progress, that will develop and transform over time as students and instructors adapt the techniques and methods to meet the needs of patients. Currently, we are working gathering Zang Fu Tui Na case studies as means to further assess the effectiveness of Zang Fu Tui Na. We are also developing a more fine-tuned integration of Zang Fu Tui Na with Traditional Tui Na and its Zheng Gu methods in order to develop more seamless integrated treatments that interact with the body on a variety of levels simultaneously.