This is Part 2 of a 2-part article on Vital Point Striking. Read Part 1 HERE.

Simultaneous with the development of the lethal techniques discussed in Part I of Vital Point Striking, were the creation of strategies which could undue the damage. These resuscitation, or “reanimation” techniques, use pressure, vibration and percussion or even heating of acu-points to re-activate or “jumpstart” the vital processes which have been short-circuited by deadly blows. Revival techniques that employ percussion or striking use much the same principle as the attacking method: the healing blow creates a a shock that re-activates what has been disrupted. The difference between the attacking and healing blow is one of intention, force and direction. It is no surprise then, that many of the same points that are used to attack and disrupt vital function can also be used to revive and restore normal functioning.

Because of their effectiveness, revival techniques are still used today. Jigoro Kano, the founder of Judo, included revival methods when he created judo from traditional ju-jitsu styles. Many Judo and Ju-jitsu schools still teach some of the old revival techniques known as kappo, or kuatsu, as an antidote to vital point strikes, chokes, fainting, and syncope. Acupuncturists and Chinese martial artists are familiar with some of the revival points which are a part of Chinese medicine, and Auyervedic healers and martial artists from India have their own methods of reversing the effects of attacks to the marmas. More recently, physicians and veterinarians have begun to study some of these revival points and testify to their efficacy.

Chinese physicians have long known that Ren Zhong, DU 26 (“Human Center”), a point between the nose and upper lip, is effective for reviving people, yet in the West this phenomenon has only recently been studied. When we hear the story of Bian Que and the Prince of Guo, it seems impossible that a single acu-point could bring someone out of a coma, but experiments with rats showed that acupuncture at DU 26 caused an immediate rise in the oxygen levels of tissue in the frontal cortex of the brain and sudden vaso-dilation with increased capillary perfusion.[1] One effect of stimulating DU 26 with a needle is the rapid release of epinephrine, which results in  revival.

Numerous studies on animals have confirmed the effectiveness of this point. In studies with dogs, in which a large amount of blood was rapidly removed (simulating traumatic injury), 75% of those animals who received stimulation at DU 26 survived. In the control group, where no acu-point stimulation was provided, all the animals died. Acupuncture at DU 26 also reversed cardiovascular depression induced by morphine. DU 26 resuscitated neonatal kittens delivered by cesarean section, a demonstrated success following unproductive cardiopulmonary resuscitation attempts.[2] DU 26 has also been employed as the primary emergency revival method for sea turtles trapped in fishing nets that have been subjected to prolonged submergence. The turtles appear to be dead, without signs of respiration or normal reflexes. Often they are not dead, but in a comatose state. Inserting a needle at DU 26 is effective at reviving them.[3]

DU 26 has other uses as well. Firm pressure with a pencil eraser or one’s thumbnail can relieve acute back pain, and increase mental alertness and energy. It can be used as an emergency point for a drowsy driver, or any situation when one is tired and immediate mental focus is required.

Another acu-point that has been the subject of numerous scientific studies is Inner Gate: P 6 (Nei Guan).  Inner Gate has been shown to significantly reduce nausea during pregnancy[4] and motion sickness.[5] P 6 also relieved post-operative nausea and vomiting from anesthesia[6], as well as nausea and vomiting resulting from chemotherapy, particularly when combined with Leg Three Mile, ST 36 (Zu San Li), the most powerful acu-point for stomach problems.[7] Additionally, in chemotherapy patients who had arterial catheters, P 6 alleviated chest pain very rapidly.

P 6 is also known to stabilize the cardiac rhythm and increase coronary blood flow. Studies in China showed that in patients with heart disease, regular acupuncture at P 6 reduced chest pain, relieved fatigue and edema, and helped them to reduce their dosage of medication, while improving cardiac function. Animal experiments have confirmed that stimulation of P 6 improves oxygen supply to the heart.[8]

Great Thoroughfare, LIV 3 (Tai Chong), has been shown to moderate sympathetic activity in the body. Research has shown that stimulating LIV 3 for 20 minutes can significantly reduce high blood pressure. It is also a useful point for headaches, calf cramps and is very effective in relieving pain and discomfort in cases of traumatic injury.

Revival methods do not always employ points in a direct manner. Sometimes percussive strikes are delivered to an area or over an organ, as in the so-called “pre-cordial thump” used by physicians and emergency medical personnel when defibrillation equipment  is unavailable. In the martial arts, an upward blow with the palm to the upper back is used to revive people who have been struck at the carotid sinus or choked unconscious. Other techniques of revival stimulate the tendons by plucking them. This activates the liver and powerfully opens blocked energy in the local area.

When someone is hit in the carotid sinus and passes out, the main mechanism of the knockout involves baro-recepters that maintain blood pressure through autonomic control of heart and blood vessels. Stimulation of these receptors is what causes the immediate dizziness and loss of consciousness. It is important to stimulate the body to restore blood pressure quickly. The quickest method of revival is to slap the kidney area 2x with a cupped palm and then sit the person up and give them two or three cupped palm slaps between the shoulder blades in and upward direction. These slaps can be at the level of T7 or T-3/T-5. This quickly sends a wave of qi and blood to the head, restoring blood pressure and consciousness. The force must not penetrate inward toward the spine but rather upward, the cupped palm creating a focal point for this movement. It this fails, push Du 26 between the nose and upper lip in the philtrum very hard, even digging in with a fingernail.

After the person is conscious, use the back of the hand to gently and rhythmically knock at the spine at the level of the top of the scapula. While knocking, direct the force and intention toward the front of the throat. The person should feel a vibration in the front of their throat. It should be comfortable and pleasant. Make sure you round the  knocking hand slightly so that your knuckles do not hit the spinous processes. Performed correctly, this “knocking” will relax the tissues and vessels in the carotid sinus area. Make sure the person rests and drinks warm liquids. Keep them under observation.

This method of revival is for healthy people engaged in rigorous martial arts or sports activities, not for elderly, debilitated people. One problem with repeated strikes to the carotid sinus is that it is an area prone to atherosclerotic plaque which if dislodged, can cause blood clots and strokes. There is speculation that such strikes can also cause cardiac arrest. 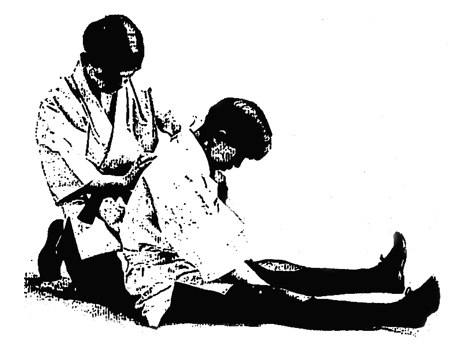 Striking Upward Between the Shoulder Blades[9]

Strikes to P 6 are often combined with a follow-up blow to ST 9 – the first strike weakens the heart and body thereby making the second strike more effective. A strong penetrating blow to P 6 can numb or damage  the medial nerve of the forearm and cause nausea and an irregular heartbeat. In Shaolin Secret Formulas for the Treatment of External Injury, Monk De Chan[10] gives the following herbal formula to treat a blow to this acu-point:

The following additions are added to the base formula for a blow to P 6:

This should be followed by taking Qi Li San with Yellow wine. Resinall K (Health Concerns) can be substituted for traditional Qi Li San, which contains toxic ingredients. Resinall K comes in an alcohol base, so the yellow wine can be omitted.

I treated a 25 year old patient engaged in martial arts. He was student of mine who had been sparring outside the school with others and received a hard kick just above the pubic bone a day and half before I saw him. When he entered the clinic, this normally energetic and upbeat young man was pale, his voice was weak and there was a slight ashen color on his cheeks. His limbs also felt weak and his pulse was a little erratic. He told me had blood in his urine.

Aside from the blood in the urine this seemed to be a classic case of “qi shock.” In the martial arts, qi shock occurs when a sudden blow disrupts the normal circulation of qi creating stasis of qi. As a result qi and fluids begin to back up behind this stasis. As qi and fluids back up over time, from minutes to hours – there is a decrease in circulation to the limbs. This in turn creates a feeling of weakness and fatigue. The person becomes pale because there is less qi circulating to bring blood to the face. Often after receiving a hard blow to the body that shocks or stops the qi, the person initially feels okay. Then over the next few minutes they begin to feel weak and faint, their face becomes pale and then they sometimes pass out. If treated immediately – by restoring the free-flow of qi with simple tui na revival techniques – there are usually no residual symptoms. If left untreated for a day or more the person can get weaker and qi stasis can turn into blood stasis creating more serious problems. In the case of the patient in question it was clear that he was proceeding along this trajectory and in addition, blood vessels in the area of the injury had ruptured so that their was blood passing with his urine.

I laid him down and needled LIV 3 (Tai Chong) and LI 4 (He Gu), called the “Four Gates” when needled bilaterally. The four gates are said to move blood and qi through the 12 meridians. The young man immediately broke into a cold sweat and passed out – so called “needle shock.” In this case, it was a result of the stasis of qi in the interior being abruptly dispelled and the qi moving quickly to the exterior and to the four limbs, away from the blocked area. This can cause momentary unconsciousness until the even distribution of qi is restored. I used the technique above – striking between the shoulder blades – to revive him and then gave him something warm to drink. He immediately felt better and his color returned.

I gave then him the following formula to deal with the blood in the urine.  Three days of herbs sufficed to complete the treatment.