In Treating Overstretched Ligaments & Tendons with Chinese Medicine Part 1, we discussed the use of Liniments, Soaks, and Gao (Poultices) in treating these kinds of injuries. Continuing our multi-modality approach to treatment, this article looks at the use moxibustion to stimulate healing and dietary factors that can enhance or inhibit tissue healing.

Moxibustion with a moxa pole is a useful adjunctive therapy. Although often combined with acupuncture, it can also be used in conjunction with massage and the application of liniments such as tendon lotion. Moxibustion helps to increase the local circulation of Qi, blood and fluids through the overstretched tissues. Moxibustion also activates the Yang Qi to dispel wind, damp and cold from the injured area. As much as possible, try to get the smoke in contact with the skin, effectively “fumigating” the injured area. Heat the area slowly over a 10-15 minute period. 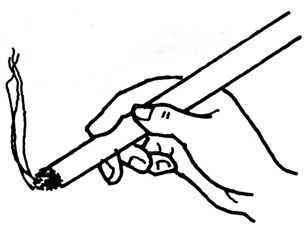 In addition to local treatment, moxibustion performed on acupuncture points may also be employed to stimulate healing on a constitutional level. I recommend choosing from one of four simple, yet very effective approaches: 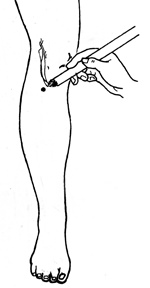 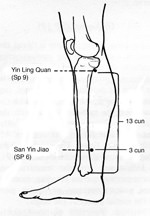 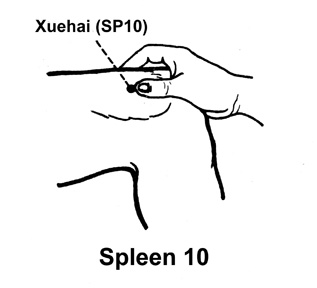 To moxa these points use the sparrow pecking technique: repeatedly bring the moxa stick toward the skin and then pull away quickly, like a sparrow pecking at grain. Do not heat the area too quickly. The skin at the acupuncture point should slowly become red over several minutes. Ideally it should become red before the person complains about the heat. When the skin becomes red at one acu-point, go on to the next point.

If all of the four scenarios are present, Cold, Damp, Blood stasis and Liver Blood Deficiency, one can cycle through the four treatments, performing one of them every two days. 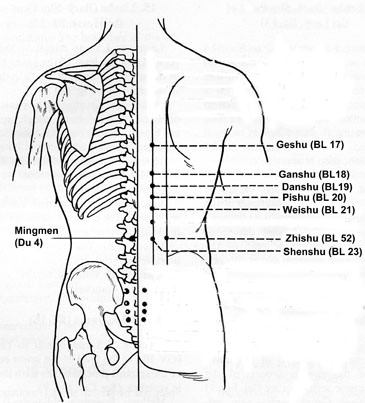 Sour foods, like tomatoes, fruit and fruit juices, vinegar and pickles are usually contraindicated in sinew injuries. This is because their sour taste “homes” to, and stimulates the liver, creating an astringing action leading to further contraction of already contracted tissues that are in spasm. In the case of lax sinews however, we can take advantage of this facet of sour foods. Combining sour foods with foods that nourish the blood and the sinews and muscles can be an important component of the healing process.

Chinese medicine contains many dietary remedies that are prescribed by physicians either to replace or augment herbal prescriptions. Tendon soup is a important dietary prescription that is used to strengthen the sinews. Beef tendon strengthens the sinews and, when cooked with vinegar, helps loose sinews regain their integrity. Many Chinese and Vietnamese restaurants serve beef tendon soup or you can make it yourself. Beef tendon usually needs to be soaked overnight and cooked for several hours to become tender. Cooked in a beef stock with vegetables, noodles, wine (to open and course the meridians) and Chinese black vinegar it becomes a strong tonic for the muscles, tendons and ligaments. Chinese herbs like DU ZHONG (eucommia bark,) which strengthens the kidneys, bones and sinews, and GOU QI ZI (dried lycii fruit), which nourishes the liver blood, can be added to the recipe to make it even more efficacious. Usually the soup is simmered with the herbs for an hour or so and then the herbs are removed.

Another nourishing dish that is traditionally given to women after childbirth, because it restores blood, promotes lactation and tightens tissues that have been loosened during pregnancy and childbirth, is pig’s feet that have been pickled by cooking them with wine, ginger and black vinegar. This dish can also be used to strengthen sinews. Pig’s feet nourish both Qi and blood as well as cartilage and sinews. The blood tonifying effect can be enhanced by adding Dang Gui (Tang Kwai: Angelica Sinensis) to the cooking process. This is particularly useful for women. If these dishes don’t appeal, an alternative used by one of my teachers is beef adobo cooked with vinegar and tomatoes.

One other alternative is to take liquid liver extract, called “Energizing Iron” made by Enzymatic Therapy. Each bottle contains capsules filled with liquid extracted from cow’s livers, The principle here is that consumption of liver nourishes the liver and liver blood which in turn nourish the sinews. Energizing Iron is available online.

It should be obvious by now that in Chinese medicine, meat is an important part of dietary regimens for strengthening bones and sinews. This can be a problem for vegetarians. Most practitioners of traditional Chinese medicine that I have met find, that in general, vegetarians have greater difficulty healing bone and sinew injuries. This can be overcome to some degree by using herbal remedies to supplement nutritional deficits, or by considering meat to be a medicine that you will take during the healing process.

Foods that Inhibit the Healing Process

Cold foods slow the healing process. They tax the available energy by drawing on it to warm the food for assimilation. Cold causes contraction and coagulation obstructing circulation and blocking the flow of Qi and blood. Therefore cold foods should be avoided with sinew injuries and in the earlier stages of fractures. Cold temperature foods such as iced drinks, ice cream, fruit juices are particularly harmful, but foods that are classified as cooling such shellfish, raw vegetables, and fruits, should also be avoided or limited until the injury heals.

Sour foods home to the liver. The astringent nature of sour food tends to tone the sinews because of the liver’s relationship with the sinews. This can be important in helping to restore the integrity of overstretched tendons and ligaments. However in the early stages of sinew injuries, especially when using soaks and liniments that restore circulation and relax spasms in the soft tissue, sour foods are contraindicated. Their action of astringing and tightening the sinews can contribute to cramping and pain.

Shellfish tend to be cold and therefore restrict circulation and contribute to coagulation of blood and fluids. Their consumption should be restricted when there is an injury to the sinews. However there is another problem with shellfish. Even the more nourishing shellfish such as oysters or mussels are traditionally prohibited when recovering from sinew injuries because they are considered to contain a toxic element that interferes with the healing process. Although modern research has not substantiated the existence of such a toxin, in my clinic I have seen several people who did not recover completely until they stopped eating shellfish. Once the injury is full healed shellfish can be consumed safely again.

Although we need fluids to moisten tendons and ligaments so that they are supple and strong, over consumption of fluids can actually impair the healing process, by draining the kidney energy and impairing circulation through fluid retention. Cold drinks are particularly damaging as the cold also impairs circulation, further depleting the body’s energy. In general, drinking 6-8 cups of liquid, including food and soup, is enough to replenish lost fluids. If you are exercising or working in the heat you need to drink more. However constant hydration is not useful and can interfere with the healing process.