If you think Dim Mak or Dan Xue strikes are merely the stuff of legend or kung fu movies, think again. Over-aggressive massage to points on the Pericardium and Heart Meridians can cause symptoms resembling a martial arts “attack” on these channels. This scenario is not an uncommon occurrence. Recently, I was contacted by two different acupuncturists in the same week, both asking for advice on treating patients who were experiencing chest discomfort and spirit disturbance resulting from over-aggressive massage on the medial side of the arm, along the trajectories of the Heart and Pericardium Meridians. One person had also been subjected to deep massage in the armpit, where Ji Quan (HT 1: “Highest Spring”) has a direct connection to the heart. 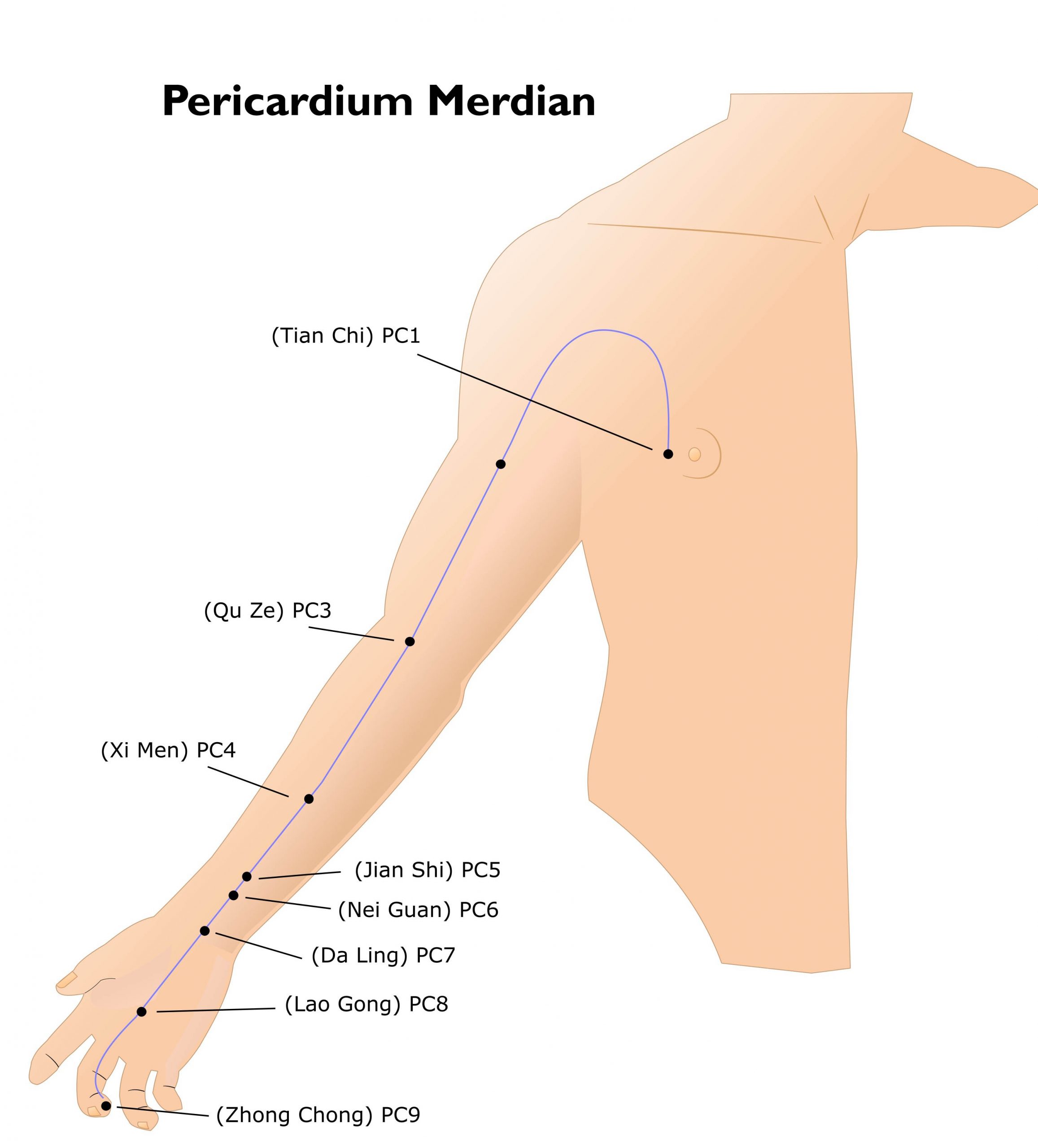 particularly vulnerable to excessive pressure during massage or incorrect needling, either of which can over-stimulate the median nerve so that it feeds back into the heart cavity. In Chinese medicine and in Chinese martial arts, the vital points (acupuncture points) energetically open and close in accordance the hour of the day and the seasons.

A  secret martial arts method, usually taught only to advanced students, involves  interrupting the circulation of Qi and blood in a meridian or at a specific point. This is most effectively done in the two-hour period when the meridian or point is most active. During this specific two-hour time period, the point and meridian swell with Qi and blood, while at other times Qi and blood recede. Further, the point should not be hit straight on, but  rather “rolled” and “sealed.”

To “roll” refers to the ability to hit at angle just beneath the nerve point so that it moves [rolls] out of place slightly, displacing it from its correct house [position]. The strike itself causes slight swelling to immediately occur. Such swelling prevents the nerve point to resume its original position. It is the swelled ball [the small area of trauma] that actually “seals” the nerve pathway and it movement of qi. Such small sealing can create profound pain, illness or death, either immediate or many days later. [1]

The time when Heart Meridian is most active is from 11 am to 1 pm and the Pericardium Meridian is most active from 7-9 pm. There are accounts of people being hit even lightly on such “open” points, and symptoms (or death) developing hours or days after the strike as Qi circulation carries the attacking force to the internal target.

Western science theorizes that negative responses to stimulation of points and meridians may be a result of sympathetic nerve overload. Sympathetic nerves from the spinal cord (part of the Central Nervous System) connect directly to the internal organs. These nerves supply sympathetic stimulation to the organs, and provide pain-related sensory information coming from the organs. They also fuse with external peripheral nerve connections that can be stimulated by acupuncture points. When vital points are struck with force and precision, they are effectively “over-stimulated” via nerve propagation –  sympathetic nerve roots at the spine can be disrupted, creating a convergence that then affects the organs through the connections between the sympathetic nerve roots and the internal organs. [3]

Sympathetic nerve overload provides an explanation of why a blow to a point like Nei Guan “Inner Gate” (P 6), on the inner side of the forearm, can cause unconsciousness or even damage the heart. A blow to P 6 stimulates the median nerve in the arm potentially overloading sympathetic activity, causing spasm and constriction of the coronary arteries. [4]

Interestingly, this spasm can be relieved through stimulation of other points, or in some cases, by a controlled strike or “thump” to an area of the back that sends a vibration inside the body, disrupting the spasm of the viscera and constriction of blood flow. These same mechanisms also explain how Nei Guan can be used to treat chest pain caused by spasm and constriction of the coronary arteries.

It is not uncommon for incorrect needling of Nei Guan to cause “vital point strike” symptoms that worsen over time. I treated a student who was needled by an acupuncturist at Nei Guan, and afterward experienced nerve pain in the arm and chest constriction. I saw him several days after the needling episode. I needled Xi Men (P 4: Cleft Gate), very carefully, and I then needled Wai Guan (SJ 5: Outer Gate), which connects directly to Nei Guan through the forearm. I also gently worked some of the tissues in his arm back into its proper alignment and finished by massaging Die Da Jiu (“Hit Fall Wine” or “Trauma Liniment” into the area around Nei Guan. This reduced the hidden swelling that was present at Nei Guan and helped restore free flow of Qi in the channel.

A Case of Over-Aggressive Massage on the Pericardium Channel

One of the acupuncturists I mentioned earlier contacted me because their patient had received a very hard massage on the pericardium channel which caused chest pain and constriction, and nerve pain in the arm. The massage had also caused the person’s spirit to become cloudy and listless. These are serious symptoms that reflect Qi and blood blocking and beginning to directly affect the heart. I advised the acupuncturist, who had also studied bonesetting (Zheng Gu) with me, to set all the bones in the patient’s arm from the shoulder to the finger tips, and have the patient take  the following internal herbal remedies.

Instructions: add the herbs to four cups of water. Bring to boil and simmer for 45-50 minutes. Strain the liquid and set aside. The final herb (San Qi) is powdered and mixed into the liquid. Then drink all of the liquid.

After straining the liquid, I instructed him to tell the patient to apply the dregs of the cooked herbs to the injured area as a poultice (alternatively  Die Da Jiu could be applied locally). I also advised him to add guide herbs to the above formula, choosing one or more herbs from the following possibilities:

Finally I told him to have the patient immediately chase the now modified All-Purpose Die Da Decoction with Modified Qi Li San, taken with alcohol.

After taking these two formulas for two days all the symptoms were relieved and the patient’s Shen (Spirit) was restored to a normal state.

Additional Techniques for injury to the Heart & Pericardium Channels

For over-aggressive massage on the Heart or Pericardium Meridians (or a Dian Xue strike), one could also needle the Arm Barrier Point: SI 11 (Tian Zong), to open up the movement of Yang Qi into the arm, and one could bleed the Jing-Well Point(s) of the channel(s) that were affected. Two examples are  bleeding Shao Chong (HT 9: “Lesser Rushing”) on the little finger, and bleeding Zhong Chong (P 9: “Central Hub”) on the tip of the middle finger.

Manual massage techniques – which move the point back into its normal location – “unseal” the point and dispel the localized swelling blocking the meridian, are also important, One can massage the area with Die Da Jiu to facilitate this part of the treatment. Setting and realigning the bones and tissues of the shoulder, elbow, wrist and fingers, to realign and open the tissues through which the Heart and Pericardium Meridians flow, in a direct and powerful manner may also be an important part of the treatment.

My Experience with Over-Aggressive Massage on Ji Quan (HT 1)

I have experienced an “attack” to Ji Quan (HT 1) from deep massage in the armpit aimed at releasing the subscapularis muscle, but the practitioner’s fingers were off target and too forceful, so they instead sealed and rolled Ji Quan (Ht 1). This caused chest congestion and pain in the armpit, and a sense of fatigue and listlessness. In this case, because Ji Quan directly connects to the heart cavity, this can be considered a direct attack to the heart cavity. This kind of attack, or “mis-treatment”, can be fatal. After the bodywork session later in the day, as  I was experiencing some unpleasant  symptoms building up in my heart and chest cavity, I remembered an ancient Greek story: The Olympic Games in ancient Greece included the vicious, no-holds barred sport of Pankration.  The story involved two Greek fighters, Creugas and Damoxenus, who struggled till dusk with neither conceding defeat. They agreed to settle the contest by trading blows without defending. Cruegas went first, striking Damoxenus a powerful blow to the head. Damoxenus was able to weather the blow. He had Cruegas raise his arm and hit him in the armpit with a piercing fingertip strike, a fatal blow. [6]

I immediately took the All-Purpose Die Da (Trauma) Decoction with the addition of Dan Shen (moves blood stasis, opens the chest and guides the formula to the heart) and Huang Lian (this herb enters the Heart Meridian and guides the formula into the Heart Meridian). I chased this formula with Qi Li San. I then immediately followed these two formulas with Shaolin Life Seizing Powder. [7]

*These herbs are fried with honey or vinegar as indicated to modify their effects.

Upon taking these formula herbs I immediately felt a sense in my chest like a blocked drain flushing and the pain, discomfort and spirit disturbance eased. I took the main Die Decoction for two more days and there were no residual negative effects.

I feel it is worth mentioning one related case study that I observed early on in my Chinese medical training. One of my students, a young man of 18 years of age had practiced Iron Palm training incorrectly from a book. Iron Palm training involves repeatedly striking a bag of beans or iron shot with your palm in a specific and relaxed manner. The idea is to very gradually thicken the bones of the hand so that they can deliver powerful, relaxed strikes. During this training, it is important that the strikes be relaxed, and that one abstains from sex during the training period of 100 days to a year.

My student did not use relaxed strikes and did not abstain from sex. He also did not use the proper liniments on his hands and forearms before and after each training session that would have prevented prevent stasis from occurring in his hands and arms. He came into the school pale and withdrawn. His voice was weak and the Shen emanating from his eyes was withdrawn and disturbed. This is an example of damage to Lao Gong (P 8 “Palace of Labor”). Lao Gong is a powerful point that vents Qi, but it can also draw Qi inward. My student’s neglect of the proper training method caused damage to Lao Gong which traveled inward to affect the heart.

Luckily, my Kung Fu teacher, Vince Black, happened to be in town at the time. Vince took one look at my student and began by setting his neck, shoulders, elbows, wrists and every finger in both hands. He gave him a hit formula and followed this with a decoction of Ren Shen (Ginseng) to activate his Yang Qi and restore his energy. This is essentially the herb formula Du Shen Tang (Pure Ginseng Decoction).

Du Shen Tang treats great vacuity of Yuan Qi with cloudy spirit, weak breathing, cold extremities, weakness and a faint pulse. The person is in shock and on verge of expiring. In China this formula has been used for shock and collapse of Qi due to acute or severe blood loss or heart failure.

After this treatment my student gradually recovered over a period of several days and then looked and felt like his old self.