Training with Master Song Zhi Yong changed my whole approach to martial arts in general, and more specifically, Internal Martial Arts. Song Zhi Yong is a senior disciple of legendary Shanzi Xing Yi Master Li Gui Chang. Master Song is rare and unique teacher. As with PART 1 of this article, I hope this article, which summarizes my studies with him over more than 20 years, gives the reader a sense of the man and his art.

I went to Shanxi every year or every other year to work with Song Zhi Yong, often stopping in Beijing to study Ba Gua Zhang with Gao Ji Wu. On some of these trips I was accompanied by my wife, Valerie Ghent, and several of my Xing Yi students, who at that time had mainly practiced Tang Shou Tao Xing Yi Quan. It was on one of these visits that Song Zhi Yong took us deep into the practice of Tu Na Si Ba – the Four Method Breathing Exercises of Master Li’s Body Method. The internal movement that Song expressed when performing these exercises was extraordinary. Qi and breath seemed to move freely inside his body. Sometimes his body seemed like a big bag that was filled with Qi, and his spine would ripple and undulate freely.

Song is an unusual teacher, because he let us feel what he is doing in Ming Men and Dan Tian. He would have us put our hands on his back so that we could feel the internal actions that were invisible to the eye. In this manner he taught us how to sense the internal actions of Si Ba that are concealed within the practice of Pi Quan, and by the end of the week I felt that something had radically changed inside my body – nothing like Song’s abilities, but a start. Sitting in a cab visiting one of the temples in Taiyuan, I could feel the “Si Ba engine” running in my body. 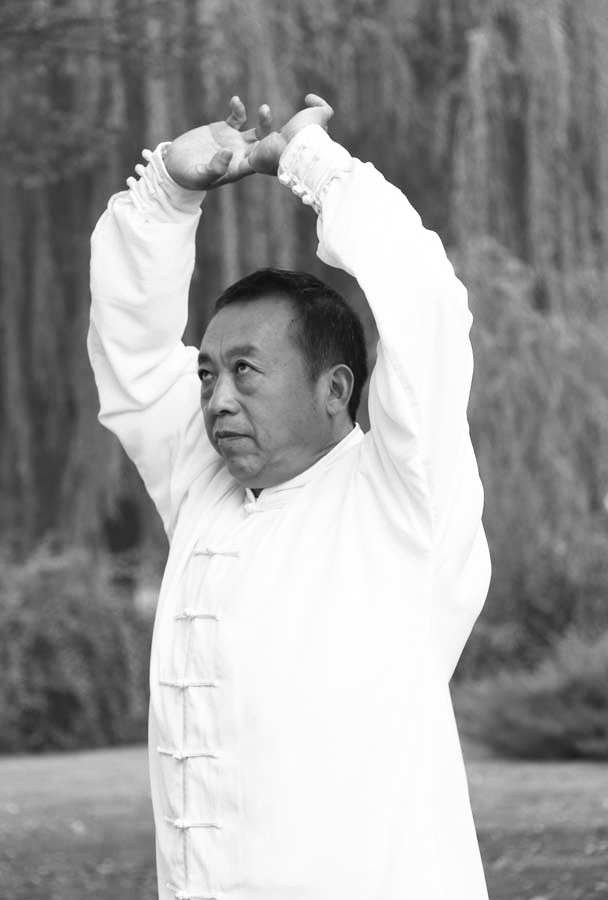 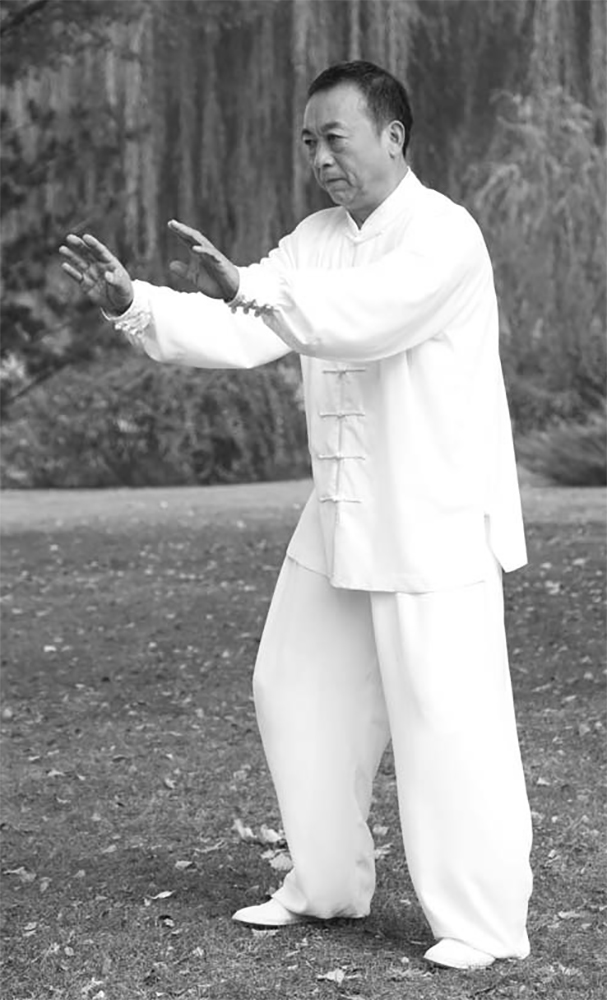 Each visit to China we spent 90% of our time on the basics – Tu Na Si Ba, Pi Quan and the Five Fists. When I pressed Song for more Xing Yi Spear, he simply handed me Liu Wen Hua’s book on Xing Yi and told me that the sword and spear come from the basics, and that my basic weapons skills were sufficient, so I should be able to figure out these weapons from the book. Master Cheng had previously let us film him performing the Shanxi Xing Yi Whip Stick – a 4-foot walking stick. When we asked for more information on the Whip Stick, Song had one of his disciples come to an afternoon training session to demonstrate the form and break down some applications. Then it was back to basics for the rest of the trip.

Song taught us Wu Hua Pao (Five Flower Cannon Fist) and Pi Wu Xing Quan (Five Elements Draping Fist), short two-person exercises that contain many practical applications and train one’s listening, dissolving and attacking skills. He would briefly do these partner drills with each of us and then, again briefly, have us do them while he watched and critiqued. It took me many visits and much practice at home to even begin to really understand these drills. The subtle and profound abilities of Master Song’s internal body action were revealed in these drills. It was almost impossible to even touch his body, he was always just out of reach and then the next moment he was right on top you, almost burying his fist in your body (albeit gently).

Training with Song was difficult. Although he is younger than me and modern in many ways, when it comes to Xing Yi he is one of the most traditional teachers I have met. While he encouraged questions, we all quickly learned that questions could be a minefield. Ask the wrong question and there were no more questions for a day or two. We learned to think for a long time before asking questions and to choose our words carefully. Training could be frustrating – the endless focus on the minutia of the basics that one could never do well enough sometimes left us feeling inadequate. This, in addition to his refusal to answer certain questions, made me feel as though I would never grasp the essence of this method of Xing Yi Quan. Later I realized that these refusals often came from his reluctance to put into words something that can only be sensed. Over time I realized that words often fix things in our minds and close doors to understanding, rather than opening them. My feeling is that Master Song understood this, and often would not answer a question, or tell us what to sense, because he was afraid of interfering with our own path of discovery and learning. 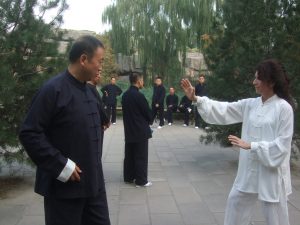 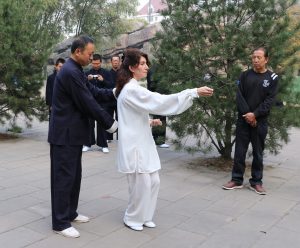 One of the things Valerie and I (and several students) have discussed over the years, was the somewhat heavy drinking that seemed to accompany our training. We liked to joke that the real hardship in training was the drinking. In the early visits to Shanxi, going to lunch and dinner with Song involved drinking large amounts of Bai Jiu (literally “white alcohol”) that was usually between 50-65% alcohol. The kicker was that Song would take us to amazing restaurants with food to die for and we would have to drink this stuff  that pretty much would kill one’s taste buds. Valerie and I like to recount one lunch drinking 65% alcohol Bai Jiu. Every time Master Song left the table we were dumping Bai Jiu in plants, sauce bowls, cans of Coca Cola, etc.

One afternoon after drinking at lunch, we were training and Song demonstrated an elbow strike hidden within Pao Quan. I think his normal fine-tuned control was a little “relaxed” from the alcohol and he broke two of my ribs in the upper chest. This was on the first day of a week of training! I knew if I did not immediately raise my arm I would not be able to the next day, so I went through the Si Ba exercises feeling my ribs go click-clack. There was pain, but I could train the next day and that was really all that mattered. Fortunately for all of us, Master Song later stopped drinking as he felt it interfered with his training, and so that removed one difficulty from training in future visits.

Standing in San Ti Shi was a barrier for me, Martin LaPlatney, and Valerie. None of us had ever managed more than 10-15 minutes without giving up. When Valerie and I made an extra trip to Shanxi to help Song Shi Yong do his first book on Tu Na Si Ba, we also trained with him every day. On that visit, he told us that we would stand in San Ti for an hour. We both kept poker faces, but inside we were terrified that we would not be able to do it. That morning he set the timer on his phone, sat down and talked to our friend and translator Huang Guo Qi, while we stood. Every once in a while he would jump up to make a quick postural correction. We managed the hour and I really thought I would not be able to move my arm the next day, but in fact I was fine. Seven days in a row of standing in San Ti for an hour, after an hour of Si Ba every morning under Song’s watchful gaze, made me realize that the barrier is the mind, not the body. The mind tells you to stop, tells you it can’t be done, tells you that standing is bad for you. But the body is able to hold the posture, and in time craves the practice of standing.

On this trip Valerie became a disciple of Song, in very moving ceremony in which Song took twenty new disciples. As Song’s “school brother” I also spoke at the ceremony, as I was technically the “school uncle” of Valerie and the other students. It was one of the most traditional disciple ceremonies I have ever attended, with a Master of Ceremonies who had a voice right out of Chinese Opera.

My relationship with Song has evolved over 20 years. One somewhat amusing aspect is that for years I tried to call Song my teacher and he would always say, “I am not your teacher, we are both disciples of Li Gui Chang, so we are school brothers.” This did not really sink in for a long time. Being American, I just did not really get the fine points of the Gong Fu family relationships. I would try and hold the door open for Song’s students when we entered restaurants, and they would refuse to enter until I went first. Finally after several years I got the message and everyone was much more relaxed when I accepted my role as their School Uncle.

Although Xing Yi does not traditionally include Tui Shou (pushing hands) practice, Li Gui Chang’s disciples routinely apply Xing Yi techniques within push hands, and their push hands practice is very sophisticated. This is probably because Li Gui Chang is renowned for his pushing hands ability in Shanxi province. Pushing hands with Song Zhi Yong is an experience. He is too far away to even reach at one moment, and the next he is way too close and filling your space. Shifting weight forward I would feel like I was on thin ice, ready to fall at any moment. Shifting weight back I would feel jammed and cramped, unable to get away from him. His touch was light, but then suddenly would feel heavy and immovable. I could never be soft enough. He would constantly tell me to relax and to use bu li (no force).

Perhaps the hardest moment in my Xing Yi training with Song Zhi Yong occurred several years ago. After 6 days of training he told me there was nothing more he could teach me about Xing Yi. Essentially he was saying that my skill level had reached the point where I had to make my own discoveries. I had been expecting the usual corrections and urges to improve, but not this. Being effectively told that you are now responsible for your own progress is not easy and quite sobering.

Subsequently, Song began to teach Valerie and myself Tai Ji Quan, which opened up a whole new world of difficulty. Song told us to focus only on the first part of the form, because he feels the essence of Tai Ji lies in the first 13 movements. So we spent hours doing these movements, over and over again. Watching Song do Tai Ji is like seeing Tai Ji mixed with Si Ba in action – slow and subtle with many internal movements. However, when he applies the movements of the Tai Ji form, everything is lightening fast and either extremely painful or very scary. I aspire to achieve this level someday.

All in all I can say that my training with Song literally changed my life, changed everything I thought I knew about internal martial arts, and improved my abilities with traditional Chinese Medicine many times over. He also greatly improved my teaching abilities. He is an extraordinary man. I owe him a debt I can never repay.