Tom Bisio writes about training in Eskrima in the 70s and 80s with Filemon (Momoy) Canete, one of the late greats of Cebuano Eskrima. Filemon Canete was one of the founders of the famed Doce Pares Club, which taught and influenced several generations of eskrimadors in the Philippines and abroad. This is the final installment of this four-part article.

San Miguel Eskrima is the “old style” Doce Pares.  This is the classical Eskrima, developed during the Spanish occupation. Such methods focus almost exclusively on weaponry and their development was influenced by European fencing methods. [1] Many mestizos (Filipinos of Spanish descent) took up the study of Western fencing. [2] Although the substitution of sticks for the European sword necessitated some modifications in technique, older Cebuano masters like Momoy still conduct some of their training with the espada and pinute, both long, straight blades, equally suitable for cutting and thrusting, and reminiscent of European swords.

Momoy told me that his Eskrima was developed primarily from the teachings of Lorenzo and Teodoro Saavedra, whose Eskrima was a product of the Spanish era. According to Momoy, the Saavedras focused primarily on tapi-tapi,  a series of parries and strikes with the stick or blade, while controlling and checking (“tapping”) with the dagger or free hand.  The solo forms and the partner exercises that I learned, as well as the use of more unconventional weapons such as the spear, chain and whip, were developed by Momoy over the next 50 years.

Because I trained with Momoy when he was already in his  seventies and eighties, what I saw was the end product of this creative process, built on the foundation of his early training with the Saavedras. Although Momoy would not answer many questions about other influences on his Eskrima, it is clear it did not develop in a vacuum. He and his brothers researched techniques and applications together. They were exposed to other systems of Eskrima both in their early training and as members of the Labongan Fencing Club and the Doce Pares Club. Both of these clubs were composed of the some of the elite of Cebu’s eskrimadors, many of whom went on to create their own Eskrima methods. The study of the Japanese martial arts added another dimension to Doce Pares Eskrima, particularly in the development of Eskrido by Ciriaco Canete and in the adoption of belt ranks by the club as a whole. Momoy’s study of Combat Judo also added to his understanding of unarmed defenses against weapons.

Despite the influence of the Japanese martial arts, Momoy’s Eskrima retained its classical roots in sword and dagger fighting. In 1984 and 1987, he and I discussed the possibility of changing the name of his method to San Miguel Eskrima, in order to preserve his  unique vision of the art and its direct connection to the older classical systems, which were slowly dying out in the Philippines, in part due to the popularity of tournaments.

We chose this name because of its reference to Saint Michael, whom Momoy considered to be an important icon for Eskrimadors. San Miguel is also a term used to describe various movements in Eskrima. The Tagang San Miguel, or “strike of San Miguel,” refers to a downward diagonal strike from right to left.  The name stems from the common representation of St. Michael stamping on the fallen devil with sword upraised.

In Momoy’s system, the San Miguel Form, also known as Segidas, is one of his most important innovations and central to the training method. Momoy described a particular kind of footwork, a backward step with the legs crossed in a scissors position, as the San Miguel Step. I puzzled over this until I saw several statues of Saint Michael rendered with his feet in this same position.

San Miguel Eskrima, as I use the name, refers to the system that I learned from Momoy between 1979 and 1987. Changes were made as I began to teach the art in the United States. Although his drills and exercises were very structured, Momoy did not teach in a progressive, sequential fashion. One day we might practice disarming and the San Miguel Form, the next day, solo forms, or bullwhip or two-person exercises. I learned the 12 basic strikes and a series of counters to them long after I had learned the San Miguel Form and more advanced counter and re-counter exercises.  He may have had a progression in his teaching that I never saw.  I was not a beginner when I studied with Momoy.  I had previously spent several years training in Pekiti-Tirsia Kali, and all of his students that I met and trained with were already accomplished practitioners with years in the art.

Momoy seemed to favor long sequences containing many repetitive movements, making them very difficult to remember. He also changed the sequences frequently, which increased the difficulty in learning them. When I tried to do this in the United States in a short two-hour class, it was virtually impossible for most people to learn them. Even in the Philippines, where life moves slower and time constraints are less pressing, I noticed that even Momoy’s most dedicated students were not motivated to learn yet another long sequence of movements that might be changed next week.

I asked Momoy about this, and about many other details of technique and application, with Freddie Abella translating.  Through our discussions I came to see that Momoy thought more in terms of principles than techniques. The forms and other repetitive patterns were designed to help the student internalize the movements so that they would become second nature. He changed them constantly so that the student would not become fixated on a particular set of movements or techniques. Many of the movements in the forms had no specific application. They could be applied in a wide variety of ways as long as one understood proper distancing and timing.

The San Miguel Form is at the heart of Momoy’s method. Its great length develops endurance and refined strength. The body learns to stay relaxed while executing a wide variety of attack and defense sequences that eventually become internalized on an instinctive level.  The rhythmic, repetitive movements create a state of internal stillness within movement. This allows the practitioner to react instantly while maintaining the calm, relaxed mind-set critical to combat with edged weapons. It also serves to promote the internal harmony of mind and body cultivated in the “internal” schools of martial arts. The master leads the form by simulating attacks that trigger evasive footwork and a specific sequence of counter-strikes. This develops proper distancing and timing and coordination of the footwork and the striking.

Once these qualities become second nature, the student can progress to the other phases of training in espada y daga:

In analyzing these forms, drills and exercises, it became apparent that many of the longer sequences were composed of smaller modules of 3 to 6 movements.  These modules served as the building blocks to create longer sequences. Focusing on the modules develops the reflexes inherent in a momentary engagement occurring in actual combat. Linking them into longer sequences develops the unbroken concentration necessary to sustain the fighter through a series of engagements that are begun and broken off, as in a duel between skilled practitioners. Each module develops a possibility that could result from the previous action. By linking them together in different ways, the student is taught to respond to changing situations. Further, by understanding the internal logic of each module and how they link together, the student is able create sequences of his own and to adapt the basic principles to different situations. Though it is impossible to create an exercise (or module) to cover every possibility, this method of analysis and practice develops hair trigger responses that are refined and expanded upon through palusot  and juego todo.

San Miguel Eskrima emphasizes training with espada y daga, sword and dagger and punte y daga, stick and dagger.  Although considerable time is devoted to the practice of other weapons, San Miguel Eskrima, as I understand it, is primarily a method for developing expertise with espada y daga.  The function of the other weapons seems to be to produce a well rounded fighter, one who is familiar with the basic principles of other weapons he or she might encounter, or be forced to use.  The use of the single garote  (stick) and the dos armas  (two sticks) are obvious extensions of espada y daga practice.  Each weapon also emphasizes certain body dynamics found in espada y daga techniques.  However each weapon, or weapon mix, has it own distinct nature depending on the size, weight, and flexibility of movement they allow. Thus, each creates a different quality of movement and stresses the use of different parts of the body. I admit that my take on this was influenced by Vince Black, my first Xing Yi and Ba Gua teacher, who came with me to the Philippines to train with Momoy in 1987.

The ananangkil, a thick 50-inch stick, is swung like a bat. It develops power that is generated from the waist and the courage to hold one’s ground and parry powerful two-handed blows.  The bangkaw (spear) is a long weapon which uses both ends to strike, parry and thrust. Its whirling movements, often similar to those used in espada y daga, help coordinate and connect the two sides of the body.  Dos armas methods also link the two sides of the body, while calling for a continuous, unbroken flow of strikes, parries and deflections that develop fluidity and speed. The cadena (chain) emphasizes the actions of the wrist and elbows, while the latigo  (whip), develops whole-body power that starts in the feet, and is released in the last instant at the tip of the weapon. The throwing knife expands the use of the dagger, by allowing it to be used as a projectile weapon.  It helps develop mental focus and projection of the intent to the target. Combat Judo adapts many espada y daga tactics to unarmed defenses against sticks, blades and knives, rounding out the practitioner’s self-defense capabilities.

Training in San Miguel Eskrima is rooted in the structured forms and exercises. The nature of fighting with blade and dagger, or even stick and dagger, is that one mistake means death. Practicing with this mind-set, even when using wooden weapons, instills self-discipline, and self-cultivation. It elevates the practice from mere physical culture to the level of art. Although  free-sparring has a place in training, it serves to test one’s skill and teach each individual to develop confidence in the techniques and the training method, by seeing how they work in an un-rehearsed situation. Undue focus on sparring and competition often develops a fixation with winning points and the willingness to absorb a blow in order to deliver one.  This completely removes the practice from the realm of real combat. 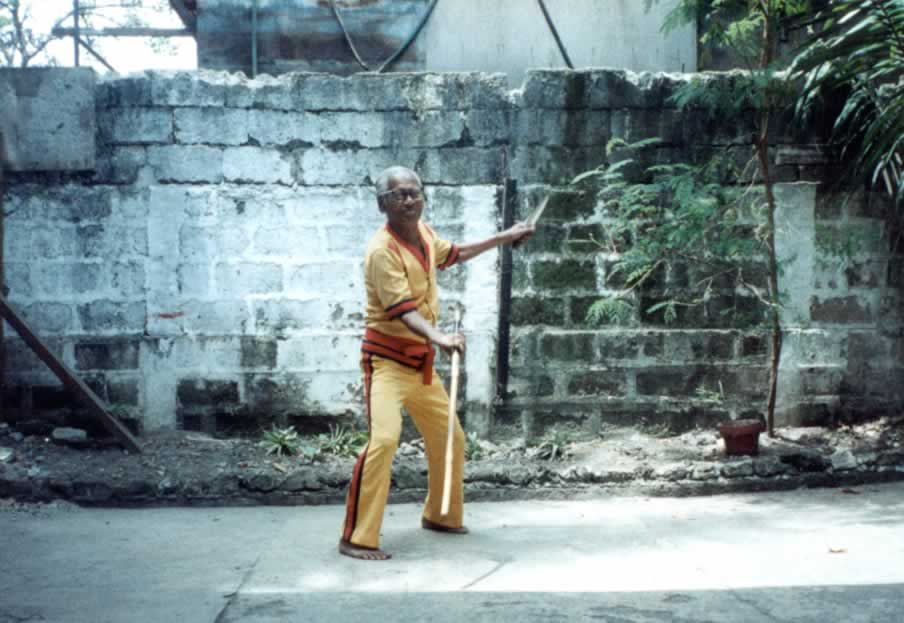 Although our training seemed casual on the surface, Filemon Canete was deadly serious about his art. He saw it both as a practical method of combat with blade and dagger, and as a means of instilling self-discipline and morality in his students. This, in the end, may be the true purpose of martial arts in the modern world.

[3] Juego Todo  has two meanings. In the context above and generally in modern times it refers to free-style sparring with protective equipment.  Traditionally it refers to a no-holds barred, all-out fight.