Tom Bisio writes about training in Eskrima in the 70s and 80s with Filemon (Momoy) Canete, one of the late greats of Cebuano Eskrima. Filemon Canete was one of the founders of the famed Doce Pares Club, which taught and influenced several generations of eskrimadors in the Philippines and abroad. This is Part Three of a four-part article.

My own research into the background of Momoy’s art, around Cebuano Eskrima, has borne limited fruit. Interviews with Momoy Canete, his brother Eulogio and other members of the Doce Pares Club provided me with some information, but raised as many questions as they answered. Momoy credited the Saavedra brothers as his primary mentors. But when I asked questions about the Saavedra brothers, I could find out very little about the Saavedra family, their prowess at martial arts or their influence on Cebuano Eskrima. Yet, the name Saavedra comes up repeatedly when one talks to many of the old Masters in Cebu.

Filemon de la Cuesta Canete was born in 1904 in San Fernando, Cebu, less than a decade after the end of the Spanish era. He lived through the period of American rule and the Second World War, into the Modern Era. He was in a unique position of having his roots in “classical” Eskrima, while also partaking of the new. Nicknamed “Momoy,” he was one of eight brothers who all went on to practice Eskrima. The Canete brothers Eulogio, Florentino, Filemon, Silvestre, Tirso, Rufino, Andres and Ciriaco began their Eskrima training under their father, Gregorio and their uncle, Pedro Canete.  More advanced instruction came from Tinyente Piano Aranas, a leading exponent of Eskrima in Cebu, and Juanso Tekya, a “terror at the sticks,” [1] who lived in the San Fernando Mountains.  Other teachers were Andres Suarez, Tito de Gema and Cesario Aliason. [2]

At the age of 18, Momoy began to study Eskrima with Lorenzo “Insong” Saavedra and Teodoro “Doring” Saavedra, considered by many to be the top eskrimadors in the Central Philippines. In 1920, the Canetes and the Saavedras joined together with other well-known eskrimadors to form the Labongon Fencing Club. The Labongon Fencing Club played a crucial role in the development of Eskrima in Cebu.  Many of its members later went on to develop their own Eskrima methods.  Venancio “Anciong” Bacon, one of the club’s directors, left to establish the Balintawak Self-Defense Club, where he taught his own unique expression of Eskrima.  Another well-known student of the Saavedras was Vincente S. Atillo, formerly a old-time wrestler. He taught his son Crispulo “Insing” Atillo, who later organized the Philipppine Arnis Confederation (PAC) in 1975. [3]

The Labongon Fencing Club eventually dissolved, and from its ashes in 1932, the Canete brothers and the Saavedras founded the Doce Pares Club. Momoy’s brother Eulogio Canete was elected president and Teodoro Saavedra, Vice President.  Doce Pares means “12 pairs” referring to a group of famous swordsman in France during the reign of Charlemagne. One of the aims of the club then, and now, is to preserve and propagate the art of Eskrima. The Doce Pares Club, still in existence today, is the oldest Eskrima club in the Philippines.

From these early roots the Canete’s developed their art over decades of training.  Because many noted Cebuano eskrimadors were members of the Labongon Fencing Club, or the Doce Pares Club, the Canete brothers were able to observe and research many different methods of Eskrima and influence a whole generation of eskrimadors. One of these, Filemon Caburnay, studied with Momoy and acted as his sparring partner.  Later he left the Doce Pares Club and collaborated with Johnny Chiuten to create Lapunti Arnis de Abanico. [4] The Canetes went on to study Japanese martial arts, which became very popular in the Philippines in the modern era. Eulogio Canete distinguished himself in Kodokan Judo. Momoy studied and taught Karate, and trained in Combat Judo under Jeseus Cui, while Ciriaco Canete studied both Judo and Aikido.

Eventually training in these arts was to some degree incorporated into the curriculum of Doce Pares Eskrima.  Ciriaco “Cacoy” Canete developed a more modern style of Eskrima called Eskrido, by blending Judo and Aikido with Eskrima. Momoy continued to teach and develop the classical Eskrima taught by the Saavedras, which had its roots in sword and dagger fighting. Emphasizing the largo (long) and media  (medium) ranges, his method employs sophisticated footwork and body positioning coupled with powerful striking and the use of the dagger to create openings and deliver the killing thrust. He created many of the forms and exercises which form part of the Doce Pares curriculum, particularly those employing espada y daga  (sword and dagger) or punte y daga  (stick and dagger). Additionally, Momoy incorporated other weapons such as the whip and the spear into his Eskrima. 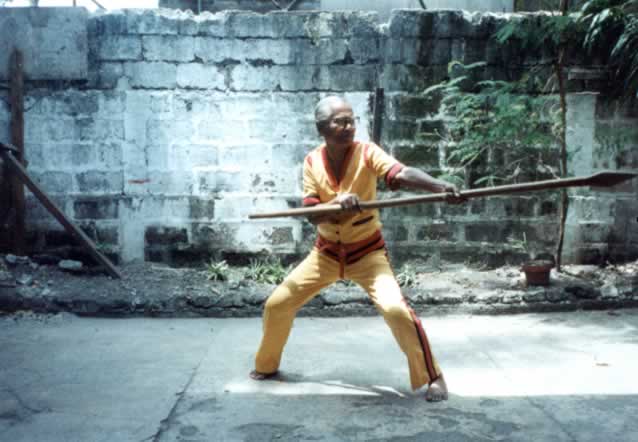 Throughout his life, Momoy continued to develop and teach Eskrima. At various times he was a karate instructor and a bus driver. During WWII he used his faith healing abilities to aid Cebuano guerillas operating against the Japanese.  He was married several times and had a host of children and grand-children. He continued to teach until his death in 1995.