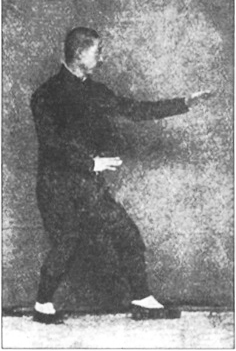 Standing in San Ti Shi is one of the most important parts of foundational training (Ji Ben Gong) of Xing Yi Quan. In Xing Yi Quan there are three key elements that must simultaneously cultivated and integrated – Spirit, Qi and Form. Without Qi form is empty, and without form Qi cannot be employed. Qi and form are the root. Without spirit, Qi and form have no guidance and the forms can not be transcended.

In the Transported Spirit Classic of the Nei Gong Zhen Chuan it says:

Training the Qi, one becomes strong;

Training the Shen (Spirit) one is capable of flight (ie: one is transported). [1]

Xing Yi Quan focuses on the simultaneous cultivation of the interior and exterior, and the integration of Spirit, Qi and body forms or patterns. Internally, Qi moves upward and downward, inward and outward, and externally there are constant changes in potentiated power – Jin (refined power) rises and falls, and moves vertically and transversely, inward and outwards, with an interplay of suppleness and firmness. Xing Yi Quan’s seeming magical results with regards to martial techniques and nourishing life (Yang Sheng) can only be realized when these elements are combined. San Ti Shi (Three Body Posture) is the one of the most important methods of training the various aspects of Qi, form and Jin and Shen.

San Ti Shi is a method of Zhan Zhuang (“Stake Standing”) in which one must stand relatively motionless, while holding the Splitting Fist (Pi Quan) posture. San Ti Shi is also known as Three Powers (San Cai 三才桩) Standing. It is the fundamental training of Xing Yi Quan. The martial abilities of the senior masters were mostly achieved by standing in San Ti Shi. There is a famous saying that, Three Splitting Fists are not as good as a one standing (三劈不如一站). Traditionally, students were supposed to stand in San Ti Shi for three years before learning the other boxing forms and methods.

In the Detailed Collection of the Art of Xing Yi Quan, Liu Wen Hua goes into great detail about training Dantian, Qi and Form:

The so-called saying that the Dantian area must be drilled first if one desires to be proficient the martial techniques, means that Qi is not enough if one is deficient in the Dantian area, and strength is not enough if Qi is not sufficient. This leads to empty postures and forms in the five fists and twelve animal forms. In terms of the defending method it is like guarding an empty city. In terms of the striking method, it is similar a soldier riding a weak and feeble horse into battle.

When confronting an enemy, there must be an accumulation of firm strength around the umbilicus in the abdomen, flowing naturally from the waist upward to the back, neck and vertex, so that the eyes are able to look around first like a general to respond with the drilling, turning, crossing, erecting, rising and falling movements, applying the dragon, tiger, monkey, horse, eagle and bear styles in constant changes, so as to win the victory in a single moment. Because there is fullness in the Dantian area, the martial techniques can be proficient. [2]

Liu then discusses how to create fullness in Dantian:

First, it is necessary to accumulate Qi. Secondly, it is necessary to circulate Qi. Accumulation of the Qi is exactly what it is mentioned in the Eight Necessities, namely, the methods of touching the roof with the tongue, knocking the teeth, lifting the anus and integrating three central parts. Also, it is necessary [for Qi] to flow through the diaphragm and the five layers of the heart, liver, spleen, lung and kidney one by one without any blockage. It is what is meant by “the five elements should be smooth.” If Qi flows like this for a long time, Qi is able to be complete and gather in the Dantian area. If Qi is unable to flow smoothly, it is not possible to develop unique skills. Therefore, it is necessary to guide the accumulated energy in the Dantian area to flow from the back to the chest cavity to fill the abdominal cavity and internal organs and then to gather in the two hypochondriac regions and finally to gush into the vertex. 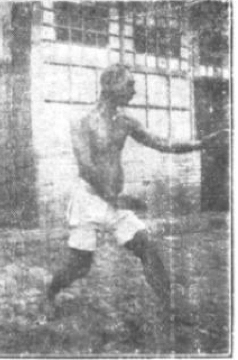 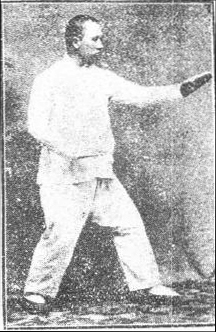 The Eight Necessities are:

Uphold the anus in order to uplift Qi so it gathers in the Dantian area. Then Qi will circulate as it accumulates in Dantian – it circulates upward through the Du channel to the vertex at Du 20. This is known as gather the anus and uphold Qi internally.

Integrate the vertex with the center (heart) of the sole [of the foot] and the soles with the palm centers. This allows Qi to circulate above and below and to the interior and exterior. Once these three parts are integrated, Qi is able to return to Dantian.

The Three Intentions are also called the “Three Internal Harmonies.”

The Three Internal Harmonies are:

Qi is the connecting link between intention and power and between strategy and application of force.

5. The Four Extremities are unified [4]

6. The Heart is Calm

When training, the heart and emotions should be calm and tranquil and the Jing Shen must be concentrated. The moment the heart-mind moves, the intention (Yi) follows it immediately. Therefore, the Heart-Mind must not be apprehensive nor hurried. When standing In San Ti Shi, the respiration should be natural, without any direct intention or deliberate management.

The tip of the nose, the hand and the foot are lined up. If three tips are not in a straight line, it will be difficult to train the Qi.

8. The Eyes are Venomous

The “eyes are venomous” implies that the eyes are sensitive and perceptive. As Qi concentrates, the Jing Shen [6] will become agile and one’s mental ability ample. The senses, hearing, taste and smell will be keen and in particular the eyes will be lustrous and bright in their expression. The sensitivity of the eyes relates to the San Min (三敏), the Three Sensitivities (Perceptions; Sharpnesses):

When the eyes and heart are Min, one can react appropriately to every situation and the hands will act in accordance with the changing circumstances.

The Three Sensitivities are part of the Eight Word Song (Ba Zi Jue 八字诀). The Eight Word Song is another method of detailing the body configuration – the internal and external alignments – that are integrated into an organic whole when training San Ti Shi.

[6] 精神 Jing Shen: Essence-Spirit. In Daoism and Chinese medicine, essence and spirit are transformed and replenished by the action of the Qi.