The primary internal exercise in Ba Gua Zhang (Eight Diagram Palm) is to walk in a circle holding fixed postures. This practice is known as Ding Shi Ba Gua Zhang. It is believed that Dong Hai Chuan, the founder of Ba Gua Zhang, synthesized the best of various martial styles in order to create Ba Gua. However the key element of this new style was the practice of walking in a circle while holding various postures that energize and strengthen the body while calming the mind and refining and purifying the spirit. It is believed that Dong studied with the Dragon Gate school of Daoism which practiced a form of Daoist circle walking meditation whose purpose was to open and harmonize the meridians of the body in order to promote health and focus and quiet the mind.

Daoist practitioners used this practice, called “Rotating in the Worship of Heaven,” not for martial purposes, but to refine qi and spirit through external movement in order to realize internal stillness or emptiness (ie: the Dao). Purportedly Dong saw that this circle walking  had value not only as a meditation and health exercise, but also as the foundation of an effective method of martial arts [1] As a result the following statement is attributed to Dong Hai Chuan:

Training in martial arts ceaselessly is inferior to walking the circle;
In Ba Gua Zhang circle walking practice is the font of all training. 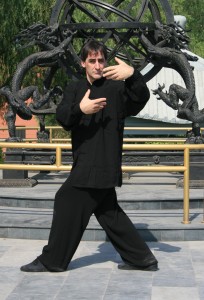 Modern research has only recently confirmed something that the Chinese clearly knew over a thousand years ago – that regular moderate exercise enhances resistance to disease, improves emotional well-being and reduces the incidence and risk of high blood pressure, strokes and diseases like diabetes. Studies have shown that a moderate exercise like walking may actually produce greater results than more intensive cardio-vascular exercise. As proof some doctors point to the work of Hiroshi Nose:

Hiroshi Nose, M.D., Ph.D., a professor of sports medical sciences at Shinshu University Graduate School of Medicine in Japan, who has enrolled thousands of older Japanese citizens in an innovative, five-month-long program of brisk, interval-style walking (three minutes of fast walking, followed by three minutes of slower walking, repeated 10 times). The results have been striking. “Physical fitness — maximal aerobic power and thigh muscle strength — increased by about 20 percent,” Dr. Nose wrote in an e-mail, “which is sure to make you feel about 10 years younger than before training.” The walkers’ “symptoms of lifestyle-related diseases (hypertension, hyperglycemia and obesity) decreased by about 20 percent,” he added, while their depression scores dropped by half. Walking has also been shown by other researchers to aid materially in weight control. A 15-year study found that middle-aged women who walked for at least an hour a day maintained their weight over the decades. Those who didn’t gained weight. In addition, a recent seminal study found that when older people started a regular program of brisk walking, the volume of their hippocampus, a portion of the brain involved in memory, increased significantly. [2]

Walking is also superior to many other forms of exercise, as it balances the musculature of the legs and utilizes the entire body through the natural oppositional movements of the arms and legs and their concomitant production of spiral movements through the torso, which in turn relaxes the diaphragm and engages the inter-costal and stomach muscles. This in turn stimulates the organs of digestion and improves circulation throughout the entire body.

Qi Gong and Nei Gong: The Benefit of Internal Exercise

Internal Exercises like Qi Gong and Nei Gong and martial arts like Tai Ji Quan, which feature slow deliberate movements performed in conjunction with deep breathing and focused mind-intention have been shown to produce a multitude of improvements in physiological functioning and resistance to disease:

The practice of Qi Gong and Nei Gong also involve control of the breath and a calm, relaxed and mind that puts aside distracting thoughts for the duration of the practice session. This has been labeled “the relaxation response” by researchers like Herbert Benson. Benson found that this mind-body state, common to various methods of meditation and exercises like Qi gong and Nei Gong, could counteract the harmful effects of stress and the flight or fight response. Many of the following conditions can be significantly improved or cured when people regularly engage in a practice that produces the “relaxation response”: [9]

More recently The researchers report that those who meditated for about 30 minutes a day for eight weeks had measurable changes in gray-matter density in parts of the brain associated with memory, sense of self, empathy and stress. M.R.I. brain scans taken before and after the participants’ meditation regimen found increased gray matter in the hippocampus, an area important for learning and memory. The images also showed a reduction of gray matter in the amygdala, a region connected to anxiety and stress. [10]

The slow rhythmic deep abdominal breathing common to Qi Gong and Nei Gong exercises is also an important element in their efficacy in promoting health and resistance to disease. Breathing “is” life. While we can go without food and water for days, we cannot go without breathing for even a few minutes. This most basic life rhythm has profound effects on the whole human organism. The movements of the diaphragm and ribs in inhalation and exhalation help the vena cava to return blood to the heart. Additionally, as the organs of digestion have direct and indirect attachments to the diaphragm, its piston-like action in breathing aids digestion and peristalsis. Even the kidneys move slightly with every breath. It is no surprise that impaired breathing can have profound affects on the functioning of the internal organs. It has been clinically shown that slow, even breathing at a rate of less than ten breaths per minute can modulate blood pressure. Regular practice of slowed breathing actually produced a drop in blood pressure of 20-30 points. The FDA has approved biofeedback-like devices that aid patients in slowing their breathing in order to treat hypertension. Other benefits of slow, relaxed. deep breathing include reduced incidence of asthma and bronchitis as well as increased lung capacity and stamina.

Ding Shi Ba Gua Zhang (the Nei Gong practice associated with the martial art Ba Gua Zhang) is unique as it combines the benefits of walking with the internal movements and deep abdominal breathing of Nei Gong and Qi Gong practices, and the relaxed and calm mind-intention associated with meditation and the relaxation response. Practitioners like Zhao Da Yuan and his teacher Li Zi Ming feel that Ba Gua is the ultimate Nei Gong exercise because it is the culmination of a tradition of Dao Yin (guiding, pulling and leading qi exercises), Tu Na (breathing exercises), Nei Gong (internal Exercises), Martial arts, Daoist meditation and Daoist alchemical practices, and other Yang Sheng (Life Nourishing) practices that date back at least as far as the early Han dynasty. Because of the late development of Ba Gua Zhang as a martial art (the founder, Dong Hai Chuan, lived from 1813 to 1882), it draws on all of these traditions and according to some experts incorporated the best methods from these various traditions into its techniques and training methods.

Both Zhao Da Yuan and his teacher Li Zi Ming feel that the Circle walking practice of Ding Shi Ba Gua Zhang conforms more completely with the intrinsic movement of the universe and the natural world than other forms of exercise. To paraphrase Li Zi Ming:

The movements of the celestial bodies in the universe contain both rotation and circulation. The human body is microcosm of the universe – a small heavenly circle. The theory of Ba Gua draws upon this observation of the heavenly bodies by using rotation and circulation through its walking and turning practice. This practice harmonizes the practitioner with the natural movement of qi of the universe. Ba Gua’s practice of walking and rotating therefore conforms to the natural principle of the world around us. By walking the circle and rotating the body, qi is aroused and circulates inside the body. This in turn strengthens the body, improves circulation and resistance to disease, and improves the functioning of the respiratory and digestive systems. Additionally it produces a unified strength that stems from the arousal of the qi. This strength can then be employed in the martial arts. [11]

Walking the circle as a Ba Gua Nei Gong practice is not simply walking. It combines the benefits of walking with Qi Gong, meditation. It also develops a refined strength that can be employed in martial arts and other physical activities. As the body turns, and rotates, the muscles, fascia and energy pathways of the body (the meridians) are stimulated by spiraling actions that engage the whole body. The deep abdominal breathing combines with the body alignments to connect the lower body to the waist and upper limbs so that the whole body can be sensed. Inside the mind is quiet and observant and outside there is movement and rotation. This creates a refined strength combined with internal relaxation, akin to the natural and relaxed strength of a cat. Perhaps this is why Ba Gua practitioners place such a premium on walking. Li Zi Ming summarized the importance of walking and in particular Ba Gua Circle Walking Nei Gong by simply saying: