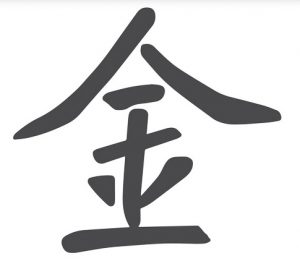 Students of Traditional Chinese medicine and internal martial arts often have questions about the Metal Element. Why is the Metal Element confusing? One problem is that the associations attributed to Metal often don’t seem to match up as nicely as those attributed to Water, Wood, Fire and Earth. Metal’s connection with the Lung and Large Intestine is not initially intuitive, nor is Metal’s association with Autumn.

Theories About the Elements

In Western Greek thought, the Four Elements proposed by Empedocles – Earth Water, Fire and Air  – were believed to contain all the building blocks of matter. Aristotle added a fifth element – Aether or Quintessence – because he felt Earth Water, Fire and Air are changeable and corruptible, whereas the heavens and stars, which are unchanging, must be made of this fifth unchangeable and quintessential substance.

In the Hindu tradition, there also exists this idea of the Elements as nature’s building blocks. Everything including the human body, is made up of these five essential elements, and upon death the human body dissolves back the Five Elements.

In the Chinese conception of Five Elements (五行 Wu Xing), the Five Elements are not so much fixed things as they are processes.   Therefore, the Five Elements are describing change and metamorphosis from one state to another. In Chinese thought, there is no static state or material that does not in some way act upon something else, or that is not acted upon by something else. In this way, yin and yang energies, though opposing, balance each other, flow into each other, and influence each other. For this reason many translators have recommended that Wu Xing be translated as Five Phases, which conveys a sense of transmutation and change, rather than Five Elements, with its (in English) implication of static, fixed forms. The Five Elements are also sometimes referred to as the Five Agents, Five Activities, Five Powers, or the  Five Qi.

Wu is the number five. Xing is generally used to mean: “to appear”; “to look”; “form”; “shape”. However Xing can also mean “to act” or “to do.”[1] In the 11th Century, Zhu Dan Yi described the interaction of the Tai Ji and the Wu Xing as follows:

Tai Ji moves and produces Yang. When the movement reaches its limit it comes to rest. Tai Ji at rest produces Yin. When the state of rest comes to a limit, it returns to a state of motion. Motion and rest alternate, each being the source of the other. Yin and Yang take up their appointed positions to establish the two forces (Liang Yi). Yang is transformed by combining with Yin, producing Water, Fire, Wood, Metal and Earth. Then the Five Qi diffuse harmoniously and the Four Seasons take their course. [2]

Some Buddhist ideas about the Elements are closer to the Chinese concept of the Wu Xing, because they describe the elements less as physical forms than as characteristics with specific natures that are part of every experience – physical, mental, and spiritual,

So, given that we are not describing just physical building blocks, but processes of transformation that interact with living things at every level of experience, how do we understand Metal in the Chinese Five Element model?

The Five Elements are often defined by what they do:

The nature of Water is to moisten and descend; of Fire to flame and ascend, of Wood to be crooked and straighten; of Metal to yield and to be modified, of Soil to provide for sowing and reaping. [3]

Metal is often defined as that which can be moulded and changed. Some sources refer to this as yielding and changing (transforming) from one state to another. In this context, Metal can also be perceived as the compressive forces of the earth, molding and changing rock and ore into metals. This includes the idea of transforming ore to metal and then forming metal into objects like swords, plough blades etc. In relating Metal to farming, Metal symbolizes the scythe that harvests grain.

Metal is the blade that cuts/splits wood – this is metal controlling wood in the Five Element Ko (Control) Cycle. However, when molded by fire, metal becomes liquid (water-like) and water easily condenses on metal surfaces.

Metal is associated with inward contracting (Yin) and the decline of matter. In relation to the seasons, this inward contracting energy is seen in the transformation of living things as their life forces gradually withdraw in autumn (the time of the White Tiger), to lie dormant in winter until the time of rebirth and Yang returning in Spring.

This idea of contracting relates to the Qi Dynamic of each Element:

The following diagram illustrates this: 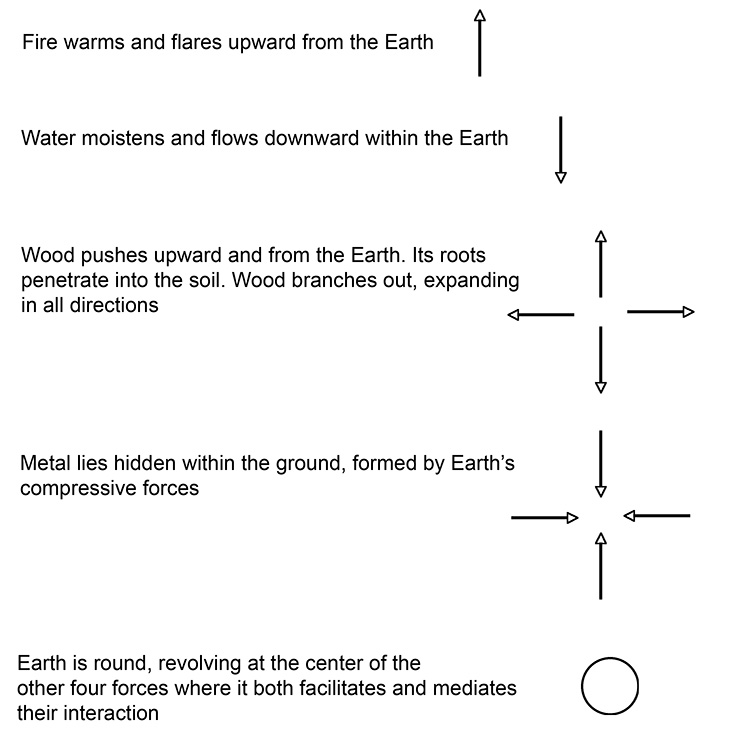 These actions of the Qi dynamic are easily felt when one practices Xing Yi Quan. In Xing Yi, when practicing the Metal Element – Splitting Fist (Pi Quan) – inside the body we feel the contracting compressive force of Metal. This force is not just downward, but moves in all directions simultaneously. We also feel how this action is related to the bellows-like movement of the Lungs and the Lung Qi Dynamic.

As the hands rise, drill, fall and overturn, the ribs and intercostal muscles also lift turn over and fall. The ribs lift and are pulled down, increasing the expansion and contraction of the thoracic cavity, increasing lung ventilation and increasing Lung Qi. This nourishes and promotes lung function.

One way to understand the connection of Metal to the Lungs and the Large Intestine is that respiration involves the inward and downward movement of Heavenly Qi (Air) being drawn in by the Lungs. The Lungs guide this Qi inward and downward, so that it spirals deep into the body  to connect with the Kidneys and Dan Tian. This movement also aids the outward movement of the Large Intestine, which is the movement of letting things go outward. Pure Heavenly Qi comes in and Turbid Qi moves outward, in a balanced harmony of energies.

When we connect the Five Elements with the Eight Trigrams of the Yi Jing, the connection of Metal with Heaven’s energies is immediately apparent. 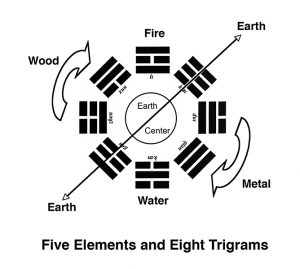 Another insight into the nature of the Metal Element can be gleaned by understanding the dynamic of the Hun and Po. One view of the Hun and Po is that they exist independently of the body and unite with the body at birth. They operate with the body’s organic functioning and then at death separate from it, the Po returning to Earth with the bones, while the Hun returns to Heaven, merging with the cosmic yang energies. This perspective views Hun, Po and Shen as a microcosmic expression of the Three Powers: Heaven, Earth and Human Beings.

Traditional Chinese medicine generally takes the view that the Five Shen of the Zang organs represent various aspects of consciousness and psycho-emotional activity that are themselves a by-product of the physical activity of the internal organs and their organic and functional interactions. The Hun and Po are often referred to as the Etheric and Corporeal “Souls” or “Spirits” respectively. Although the term “souls” can be used to refer to the Hun and Po, they are better seen as two types or two groups of vital force that are the source of life in every individual. They can be referred to as singular or plural. Hun is/are yang, luminous, and volatile, while the Po is/are yin, somber, and heavy.

Some sources say that the sensory perceptions of the eyes and ears comprise the Po. When these become Qi it is called the Hun. Hun is said to have three “spirits” which are akin to the Three Treasures, and the Po seven “souls” which are related to the emotions and senses.

Again there is  idea of balanced energies – the Hun and Liver Qi expanding up and out like a tree, and the Po and Lung Qi expanding downward and inward.

These all circulate and transform unceasingly, bringing us back once again to the idea the Five Elements as a model of transformation and change, and hopefully with a better understanding of the Metal Element.

[1] A Short History of Chinese Philosophy: A Systemic Account of Chinese Thought From Its Origins to the Present Day, by Fung Yu-Lan (New York: London: The Free Press, 1948 and 1976) p. 131

[2] Li, Qi and Shu: An Introduction to Science and Civilization in China, by Ho Peng Yoke (Seattle: University of Washington Press, 1987) p. 12.

[3] A Short History of Chinese Philosophy: A Systemic Account of Chinese Thought From Its Origins to the Present Day, by Fung Yu-Lan (New York: London: The Free Press, 1948 and 1976) p. 132