Continuing our discussion of the importance of Symbolism in the Chinese Internal Martial Arts from last month, Part 2 further explores animal symbolism and then looks at Chinese characters or ideograms as symbols that contain a wealth of important information for the practitioner of internal arts, especially Xing Yi Quan and Ba Gua Zhang.

In the internal arts, animals act as emblems of an internal configuration or body pattern that transforms the body from the inside out as it flows from one posture/configuration to another – now a crouching tiger, or a cloud swimming dragon, then a hawk diving and soaring, or a snake coiling and twisting. The importance of the animal image lies not in the external idea of trying to look like the animal, or in directly imitating the animal’s movement. Animal imagery is instead representative or symbolic of an internal ability or attribute that cannot easily be explained with words. The internal ability or configuration represented by the animal is developed through practicing the movements (forms) associated with it, while simultaneously engaging with the imagery surrounding that animal. Below are some examples from Xing Yi Quan and Ba Gua Zhang:

In Chinese internal arts, every movement has a name that describes the action, and in many cases, the internal actions and attributes that are in play during the movement. These names give the practitioner an image which conveys the internal intention of the movement – including applications, body configuration, force dynamics and the essential essence and spirit of the movement. Students who refuse to engage with the names make the learning process much harder on themselves. Without understanding the spirit of the action, the movement becomes empty, devoid of meaning and intention. Some examples are below.

1. Millstone Pushing Palm: This ding shi posture is perhaps the most common posture for walking the circle in Ba Gua Zhang. It is the culmination of the upward drilling and overturning movement of the single palm change. The name Millstone Pushing conveys the idea of pushing from the legs to drive the arms, as in pushing the bar that turns a large millstone to grind grain. This image conveys the internal dynamic (the nei gong) of the circular walking and pushing movements.

2. Fierce Tiger Descends the Mountain: This ding shi posture is also called the Downward Sinking Palm. The palms have a feeling of sinking rather then pressing downward, resulting in a relaxed extension of the elbows and dropping of the palm root, as the shoulders sink down. When walking the circle in this posture, it can feel as though all four limbs are touching the ground, just like the sinuous cat-like motion of a tiger descending a steep hillside. 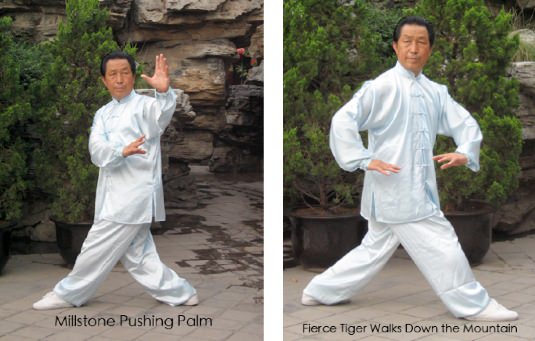 3. Golden Threads Wrap the Wrist: The image of soft pliable silken threads wrapping around an object – in this case the opponents wrist – conveys a sense of seamless smoothness in the performance of the technique. This flexible nature of the threads, with their many points of contact, makes it hard for the opponent to feel what is happening and where to apply resistance.

4. Wipe the Eyebrows with Gold Silk: Here again the image is of something soft and pliable, brushing the eyebrows softly and smoothly so that the opponent finds it impossible to find a point to resist. Performing this action so that it contains the feeling of the supple nature of silk also makes it possible to adjust smoothly to the opponent’s attempts to escape. 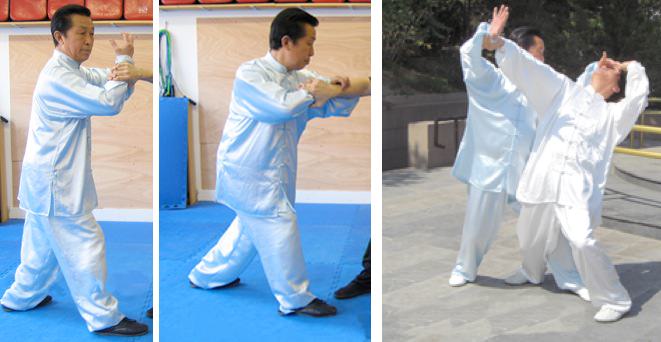 5. Zhou Chang Shoulders the Saber: This movement references Zhou Cang, a character from the Chinese classic Romance of the Three Kingdoms, who carries the heavy broadsword of the great General and warrior Guan Yu, who was renowned for his power and strength. 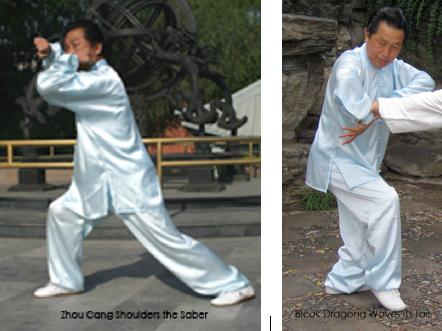 6. Black Dragon Waves its Tail: The black dragon is associated with Water and the North. This image references the movement of the waist, back and legs in coiling and turning. The full movement is like a tail coiling and whipping outward. It is a key movement in Gao Ji Wu’s expression of Ba Gua Zhang.

7. Golden Cicada Sheds its Skin: This Ba Gua movement resembles the action of an insect working its way out of its exo-skeleton. The name gives one an image of the internal body image required to perform the movement properly – through a supple “squirming” motion one can enter and throw the opponent. Golden Cicada Sheds its Skin also references one of the 36 Military Stratagems sometimes attributed to Sun Zi, author of Art of War. From a distance, the cicada’s because looks like a live cicada. By appearing to be in one place, the cicada can move to another. [1] This idea is also applied in the Ba Gua movement.

8. Sparrow Hawk Flies Through the Forest: This movement references the ability of the sparrow hawk to “shrink its body” by folding its wings in, so that it can penetrate the spaces between the tree branches to catch its prey. This movement is used in Xing Yi and Ba Gua to “enter the forest” of the opponents arms (his defense), to penetrate through to the target. Internally, the body shrinks or contracts and then as one penetrates, there is an outward forceful expansion.

9. Fight Between Dragon & Tiger: This movement in Xing Yi Quan is a simultaneous kick and punch. The name references the yin-yang duality of the dragon and tiger and their mutual connection and opposition. A fight between dragon and tiger can also mean a competition between rivals who are equals but have different methods and strengths.

10. One Horse and Three Arrows: This movement, from the Xing Yi Lian Huan (linking) form, involves quick forward and backward steps with three bursting fists {beng quan) that arrive in quick succession – like three arrows shot quickly from horseback. The image of the galloping horse and the three arrows arriving almost simultaneously conveys the timing, essence and tactic of the movement.

11. Cloud Hands: Clouds are transparent and insubstantial, yet at the same time they can unleash storms and rain. The ability of clouds to form and disperse as water evaporates upward and rains downward on the earth is imitated in the changes within the cloud hands movements. Also imitated, in both the movement itself and in the spirit of the movement, is the slow moving, drifting and yet stately movement of a cloud across a placid landscape.

12. White Crane Spreads Wings: The upright standing posture of the crane as it spreads its wings in an open-armed stance, is imitated in this posture. The red-crested white crane is a symbol of immortality and wisdom and is associated with heaven. Taoist hermits were thought by some to become cranes when they died. Performing the posture brings clarity and calm to the mind and spirit. The spreading wings motion  comes from the bones and tendons using the back to spread and open the arms in a manner similar to a bird spreading its wings. 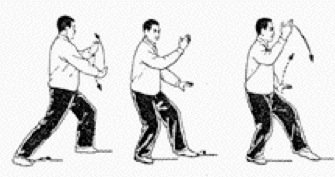 Chinese characters are, to some degree, pictographs, or ideograms. Therefore, the very language used to express concepts in China already contains symbols. This makes it difficult to translate certain concepts and characters into English. It is easy to see the necessity of students of the internal arts engaging on some level with Chinese characters – rather than simply replacing them with a single English word which inadequately expresses the concepts one is trying to understand. For example, a common martial arts term in the internal arts is Pi (劈) which is usually translated as “chopping” or “splitting.”

Pi can mean to split, divide, chop or wedge; to cleave or to injure ones/legs fingers by opening them to wide. [2] Often, although splitting may look like a chop, it actually employs a wedge-like force that splits things open or apart. The shape of an axe blade is like a wedge, and splitting refers to the action of the axe as it spilts the wood apart. This action is the key to the internal movement in Xing Yi’s Pi Quan or “splitting fist.” Pi can also refer to a strike of lightening. Pi contains the knife radical (Dao 刀) combined with 闢 (pi) － “dispel; open up”.

The Knife phonetic appears in many characters. It probably is derived from a pictogram of a ceremonial bronze knife. It appears in characters like:

肖(xiao) may simply be a phonetic, but according to some sources, 削 (xiao – slice) was created from 小 (xiao – small) and 肉 (rou, ) meat, and刂(刀 – knife). A 刀 knife cutting 小 small pieces of 肉 meat. [3].The Knife radical (刂） also appears in words that are associated with sword and spear actions, as in the word Ci (刺) – meaning thorn, prick, stab or irritate. On the left is a tree with thorns and the knife radical is added for emphasis.

Dantian, the area below the navel where the original qi resides, is usually translated as “cinnabar field.” If the body is lying flat, and the intersection of the central channel and the Dai Mai is projected on the belly, it resembles the character for field (田 – Dian).[5] Dan can mean red, or cinnabar or a powder or pellet, but in Nei Dan practices, refers to an elixir which is formed inside the body.

The Ming Men is considered to be the area between the two kidneys. It is also known as the “cinnabar field,” so there is considerable overlap between the concepts of the Dan Tian and Ming Men. Ming Men means literally the “Life Gate” or “Gate of Destiny,” Ming can also mean refer to the idea of issuing an order or a command. The acupoint, DU 4 or Governing Vessel (GV) 4 is also known as “Ming Men.” DU 4 lies between the 2nd and 3rd lumbar vertebrae. It is the major acu-point for directly accessing the life gate.

The second character above is men (門 – gate). This pictogram of a gate is part of many words used in the martial arts：開 Kai (Open); 闖 Chuang (to rush; break through) which pictures a horse 馬 rushing through a gate 門, and 攔 Lan (cut, off hinder, block), the hand radical on the left and a gate with something like a bundle blocking it.

Another form of the character adds grain, using the character for mi (rice) which is depicted as: 米. This creates an image of steam or vapor rising from cooking rice.

[4] The Nature of The Chinese Character, text by Babara Aria, Calligraphy by Russell Eng Gon, Illustrations by Lesley Ehlers. Simon and Schuster, 1991, p. 94-5.

Credits: Photos by Valerie Ghent, from the book The Essentials of Ba Gua Zhang by Gao Ji Wu and Tom Bisio.