This stage begins 3-4 weeks after the injury. Swelling and inflammation are generally gone, but stiffness and aching pain may still be present.

A minor sprain should be resolved by this point, especially if it was treated properly from the beginning. However, injuries to tendons and ligaments can take up to 6-8 weeks to heal completely and, in severe cases, it can take even longer. If the injury was treated properly in the acute stage, stiffness should be minimal at this point and more rigorous exercises can be begun.

When damaged tissues are still healing weeks after an injury,  they are prone to re-injury, primarily because of the urge to try to return immediately to previous levels of performance. Runners want to return to the mileage they covered before the injury, and yoga students want to keep up with the rest of the class. Slowly increase the intensity while continuing to use the Chinese sports medicine treatments from Stage 2. Keep treating the injury with the methods below while returning to your normal activities.

It cannot be emphasized enough that one of the “secrets” of Chinese Martial Medicine and Chinese Sports Medicine is to use liniments, soaks, gao (plasters and poultices), massage, acupuncture, and even sometimes internal herbal formulas preventatively. This means treating even the smallest “tweak” or muscle ache immediately when it occurs, or at least that same day. Small micro-traumas from hard training or competition can easily add up to a big problem later.

After resting a sprain or strain for 3 or 4 weeks, it is frustrating to still feel pain and discomfort. Residual pain and stiffness, and the danger of re-injury, are due to several factors.

1. There are still accumulations of Qi, blood and fluids creating stiffness and pain.

You may actually feel hard nodules like sand in the tissue, indicating accumulation and calcification. This is very common in conditions like Achilles tendonitis. Exercises that gently stretch and mobilize the tendon, combined with soaks like the Extra Strength Tendon Relaxing Soak (Shu Jin Huo Xue Jin Ji) or the Master Bonesetter’s Trauma Soak (Zheng Gu Die Da Jin Ji) can help break up these nodules and accumulations. The large dosage of Tou Gu Cao in Extra Strength Tendon Relaxing Soak makes it very suitable for spasms and stiffness in the sinews, while Master Bone Setter’s Trauma Soak might be more suitable if there are still accumulations of blood and fluids in the local area. Soaks are particularly effective if combined with massage and acupuncture. 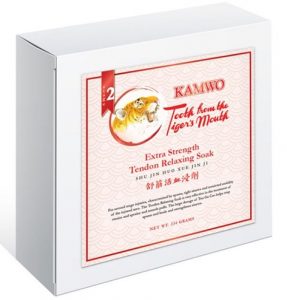 Liniments like Extra Strength Trauma Liniment (Qiang Li Die Da Jiu) and Dragon’s Blood Tendon Lotion (Xue Jie Shu Jin Lu) can also help disperse stasis and kill pain, particularly as one slowly returns to training and exercising. If the muscles are stiff and stretching is part of the rehabilitation process and an injury prevention plan, upon returning to normal activities, then Yoga Stretching Liniment (Yoga Shen Jin You) can be a very useful addition to your injury prevention toolbox. This liniment is based on a traditional formula designed to aid stretching and flexibility training or Yoga practice.

Yoga Stretching Oil is rubbed into muscles and joints before and after activities like Yoga, or other stretching routines, so that the muscles and fascia more easily adapt to training, thereby increasing and maintaining suppleness and flexibility. Clinically it is often used for joint pain that is accompanied by tight, bound muscles. Yoga Stretching Oil specifically targets the muscles, fascia, tendons and ligaments. The addition of Shen Jin Cao relaxes the sinews and invigorates circulation in the collaterals, which helps improve flexing and extending of the muscles and joints. 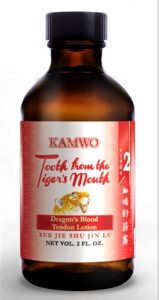 Plasters, like Gou Pi Gao, or the 701 Plasters, are also useful for breaking up accumulations, and they  help to remove the remaining stasis and ease joint pain and stiffness. 7o1 plasters can also help to break down calcifications like bone spurs. 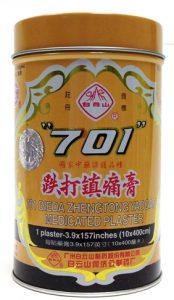 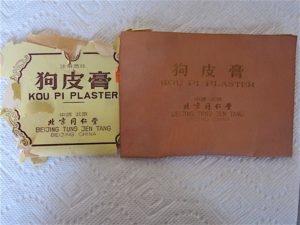 If there are bone spurs, in addition to 701 plasters, it can be useful to use an internal formula like Bone Spur Powder (Gu Ci San). Bone Spur Powder is a proven formula that can eliminate the pain associated with bone spurs (osteophytes), reduce the spur, and prevent the formation of new osteophytes. Studies in China have shown that Bone Spur Powder is usually taken for 2-3 months in order to obtain clinically significant results. A small percentage of patients report results in 2 weeks to a month.

For heel spurs, use Bone Spur Powder conjunction with the Bone Spur Soak (Gu Ci Jin Ji). Although not always effective at significantly reducing bone spurs, Bone Spur Powder can prevent new spurs from developing. After soaking, do not also apply the 701 plaster. This can cause a burn. Let the soak do its work, and apply plasters the next day or during the next phase of treatment. 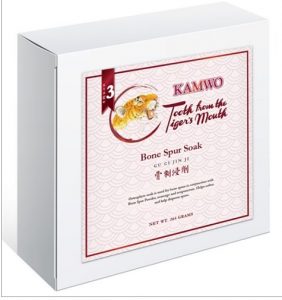 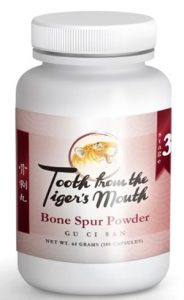 2. There May be some instability in the joint if the ligaments were overstretched, making it weak and vulnerable to re-injury.

This is very common in wrist and ankle injuries, where many small ligaments hold the bones together in a complex arrangement. These ligaments are easily sprained and overstretched, resulting in instability of the joint. When you rotate the wrist or ankle the bones and ligaments often slip very slightly in and out of their natural alignment creating a clicking or popping sound. Qi Gong “strengthening”  exercises like some of those found in Yi Jin Jin or Shaolin Nei Gong are very important parts of the rehabilitation program. Muscles, sinews and bones must be systemically strengthened  in order to restore stability to an area that has been structurally weakened.

Tonifying internal herb formulas such as the Stage 3 Bone Knitting Pill, or Strengthen Sinew Pills (Bu Jin Wan) can be an important part of the healing process and rehabilitation program.These formulas have ingredients that nourish the blood and kidneys and liver in order to strengthen tendons and bones, and their effect can be enhanced if combined with plasters or gao (poultices) that move the blood and strengthen sinews and bones, such as the Bone-Sinew Gao. 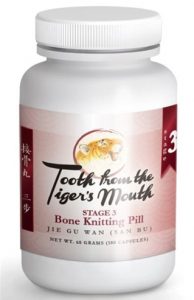 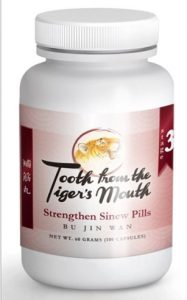 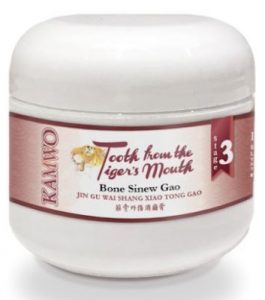 I injured my wrist during a seminar taught by one of my Gong-Fu instructors. We were practicing Qin Na (joint locking) techniques. He had me grab him and then demonstrated a painful wrist lock. I heard a sickening crunching sound as pain shot through my wrist. I was able to go on with the class, but by the end I could hardly bend my wrist. We massaged the arm and wrapped the wrist with cloths soaked in Extra Strength Trauma Liniment. Over the next two weeks I applied Gou Pi Plasters to move stagnation and relax the tendons and ligaments that were in spasm. My teacher then set the bones back into place. By this time the wrist felt pretty good, so I forgot about it and went back to training, but it was never quite the same. Periodically I would hear something crackle when I would rotate the wrist or make a tight fist. My grip strength was weaker than it had been before. Once a year I would do something as simple as blocking a punch, there would be a crunching noise, something would slip out of place and the wrist would lock up again. The small ligaments that bind the eight carpal (wrist) bones together were overstretched each time I re-injured my wrist. Finally after several years of merely applying first aid treatments and not following through until the injury was completely healed, I treated my wrist properly with acupuncture, massage and Gong Fu Sports Medicine methods. I used plasters that strengthen the tendons and bones while simultaneously taking Bone Knitting Powder internally. I also did the Eight Brocade Qi gong exercises and other exercises that helped to strengthen the wrist. Finally when there had been no pain for weeks, I practiced some of the martial arts movements with a heavy broadsword, to further improve grip strength and the stability of the joint.

Circulation in the injured area is impaired and cold may have penetrated into the outer layers of soft tissue.

The injury may feel slightly cool or cold to the touch, especially when you press down on the area past the superficial muscle layer. The area may also feel more sensitive to the cold, and it may ache in damp or chilly weather. Chronic injuries that are not treated, or are treated incorrectly, can eventually become a Bi (obstruction) syndrome manifesting as arthritic joint pain. Often this is due to failure to treat the injury properly from the outset and from over icing.

If the injury has progressed to this stage, use warming soaks and plasters that drive out the cold and improve local circulation. Moxibustion is particularly useful. Moxibustion over acupuncture points, or over cold, stiff areas, helps to warm the tissues and drive out the cold. Ai Ye, the herb used to perform Moxibustion has blood moving and circulation activation properties, so this therapy is more effective than heat alone, particularly if the oils from the Moxa punk or moxa smoke make contact with the skin. Warming liniments such as Dragon’s Blood Tendon Lotion and Tiger’s U-I Oil (Hu Biao Yu Yi You) are also effective when sinew injuries are aggravated by cold. Tiger’s U-I Oil is particularly effective because it contains Aiye oil, (one of the active ingredients that is released when performing moxibustion). Aiye opens the channels, stimulates circulation of blood, Qi and fluids, and drives out cold and damp. 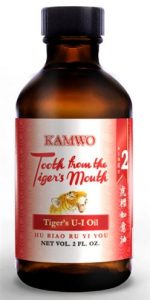 Another very effective liniment which treats damp-cold Bi is Tiger’s Invigorate the Collaterals Liniment (Hu Biao Huo Luo You). Tiger’s Invigorate Collaterals Liniment is specifically designed for wind, cold, and damp that lodge in the joints, causing stiffness and pain – Bi Syndrome. This formula includes vine medicinals, like Ji Xue Teng and Ren Dong Teng, which are traditionally used for joint pain, because they open the channels and collaterals, free restrictions in the sinews, and dispel wind and dampness 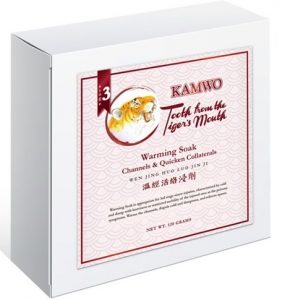 An Aikido practitioner came to my clinic with back pain. He had originally hurt his back by lifting a piece of heavy machinery, but the injury was exacerbated by Aikido, a martial art that involves a great deal, of throwing and rolling. On the first several visits I treated his back with massage and acupuncture, but there was little improvement. Finally I noticed that although his back felt warm to the touch on the surface, when pressed deeply, it felt cold. When I commented on this he mentioned that the back felt more vulnerable and sensitive to cold than the rest of his body. In addition to acupuncture, I performed intensive moxibustion on his back, heating it up until the skin started to sweat. Then I soaked paper towels in U-I Oil and placed them on his back. I covered the paper towels with a hydroculator pack (a form of wet heat).  The heat from the hydroculator pack drove the oil into the muscles. This combination turned the corner on his back pain.