The connection between traditional Chinese ideas about the Sinew channels and tendon strength and power, and recent discoveries about fascia and its relation to health and fitness are fascinating. This series of four articles  explores some of these connections.

筋 Jin is composed of:

One of the things traditional martial artists are referring to when they talk about “Tendon Strength” is the recruitment of long chains of muscles, tendons, ligaments and joints to generate whole body power. This can manifest as a resistance force or the emission of force over a short distance. Rather than relying on segmented movements that increase momentum to generate power, internal styles try to initiate force from the whole body moving as a unit. Therefore, rather than strengthening individual muscles, training focuses on “whole-body”, “unified” power, in which the body moves as a single unit, gathering and releasing power simultaneously. This is done by increasing the strength and connectivity of the Jin, the sinews. When the sinews are correctly trained the result is an elastic, power dynamic.

Sinew Channels and the Jing Luo

In Chinese Medicine, the Sinew Channels or Muscle-Tendon Channels (Jin Jing 筋經) are broad longitudinal bands of muscles, tendons and ligaments, and connective tissue that wrap or “knot” at the big joints of the body (hip, knee, ankle, shoulder, elbow and wrist, occiput and face). The joints divide the limbs into sections, like the nodes in bamboo. Other words commonly used to describe the action of the Sinew Channels at the joints are “inserting”, “binding” and “fruiting.”

For example, the Stomach Sinew Channel begins at the middle three toes and attaches at the bottom of the foot. It ascends along the lateral aspect of the leg and branches. One branch disperses along the tibia, and then binds at the lateral aspect of the knee (1, 2, 3 in the diagram below).  From the knee, the Stomach Sinew Channel inserts and knots at hip joint (4) before extending to the lower ribs to connect with the spine ( 5).

The other branch runs along the tibia and knots at the knee. It ascends from the knee ascends the thigh and knots in the pelvic region (6, 8, 9).  Dispersing upwards on the abdomen and attaching at ST 12 (Que Pen) (9, 10, 11), it extends to the neck, knots in the face and divides (12). 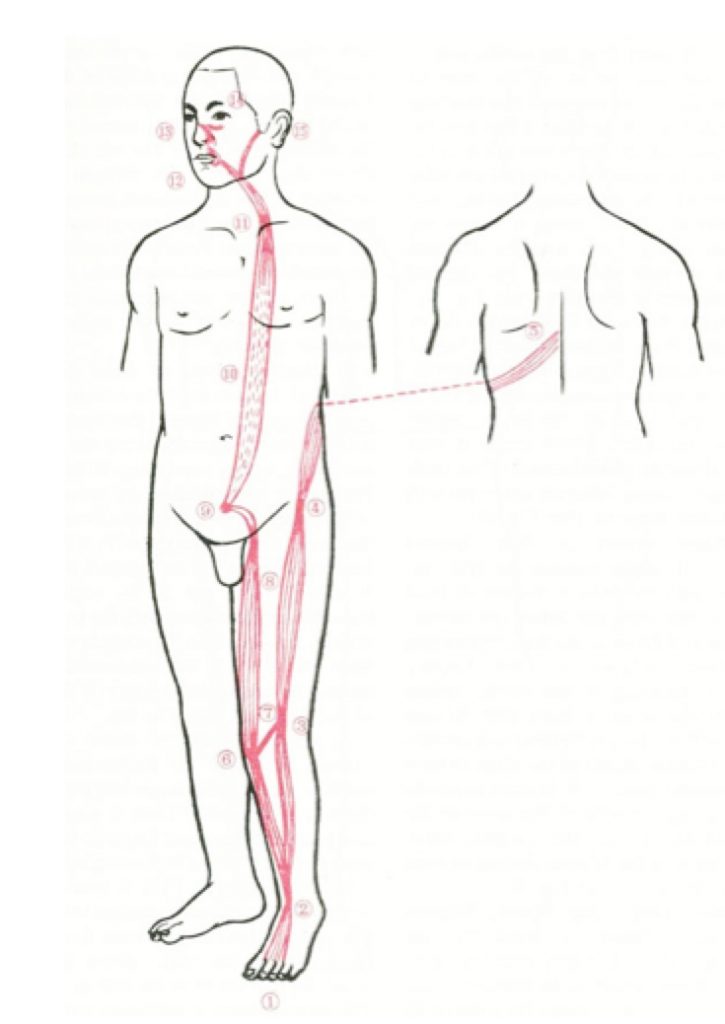 At (7), a sub-branch connect to the head of the fibula and the both the outer line of the Stomach Sinew Channel and the Gallbladder Sinew Channel on the side of the leg. It is easy to see why the knee is sometimes called the “House of Sinews”!

In the face at (12), one branch of the Stomach Sinew Channel goes to the mouth, attaching below the nose (12, 13), and then joins the Bladder Sinew Channel to form a muscular network around the eye. The other branch goes along the jaw to attache in front of the ear (15).

The Sinew meridians are the conduits of Wei Qi (Defensive Qi). Wei Qi warms, protects, activates upright posture, and activates movement. Wei Qi, as it moves through the Sinew Channels, allows the individual to respond in a reflexive and spontaneous manner without volition or cognition. Wei Qi and the Sinew Channels generate an immediate ability to respond to changes in an individual’s environment.  The Sinew Channels have connections with other channels and collaterals and other parts of the Jing Luo network. Jing Luo is the correct name for what are popularly called “meridians.”

經 Jing means warp, as in the threads in fabric. It also connotes “going through”, “directing” and “leading”.
絡 Luo means “net”, or “network”, “wind” and “enmesh.” It refers to branches, or branches and networks that run off the main tracts, including elements that overlap with the circulatory system.

So perhaps a better translation of Jing Luo is “channels and collaterals.”

Dr. Wang Ju-Yi, a famous acupuncturist from Beijing, says the following about the Jing Luo:

Narrowly speaking, one might say that the channels are “spaces” (jian xi) in the body. In a larger sense, the concept of channel refers not only to the spaces, but to everything wrapped within them. In this definition, the concept broadens to include not only the spaces within the connective tissues, but also the structures (and fluids) held and brought together by these connective tissues. A channel is then like a river in that it includes the riverbanks and also the complexity of life within the water itself held by those banks. In the body, the channels are the groupings of connective tissue, that bring together the blood vessels, bones, lymphatic vessels, nerves, tissues and interstitial fluids within their purview. [1]

It is obvious from this description that, to some degree, the concept of the Jing Luo in general, and the Sinew Channels in particular, includes the idea of connective tissue or fascia.

Fascia is an uninterrupted viscoelastic tissue, which forms a functional 3-dimensional collagen matrix that surrounds and connects every muscle and organ, forming continuity throughout the body. Fascia surrounds and penetrates all structures of the body, extending from head to toe. [2] Fascia is like a series of interlocking packets or wrappers. The inner layer (inner wrapper) is composed of bones and cartilage wrapped in periostium of the bone and the ligamentous wrapper of the joint capsule. The outer layer consists of muscle packets within connective tissue that is attached by tendons and other connective tissue to the inner layer.

The fascial network represents one continuum from the internal cranial reciprocal tension membranes to the plantar fascia of the feet. In this sense, fascia forms a whole-body continuous matrix that interpenetrates and surrounds all organs, muscles, bones, and nerve fibers. It could be considered as a single organ, a unified whole, connection to every aspect of human physiology. In effect, one could say that there is only one muscle in the form of 6oo different packets with no beginning and ending.

Fascia has a number of interesting properties:

1. Fascia is largely innervated by proprioceptive nerves. Fascia is also intimately involved with the autonomic nervous system.
2. Proprioception and Kinesthesia are primarily fascial not muscular. [3]
3. Connective tissue behaves like a liquid crystal. It is capable of transmitting electrical signals throughout the body. Collagen, one of the main components of fascia, has been shown to have semi-conductive, piezoelectric, and photo-conductive properties. Electronic currents within fascia can not only flow over considerable distances, but can also be altered by external influences and cause a physiologic response in neighboring structures. [4]
4. Fascia can contract.
5. Fascia plays a dynamic role in transmitting mechanical tension.
6. Connective tissue, even dense tissues like tendons and aponeuroses—is much more significantly elastic than previously thought. Fascial elasticity is stored and returned very quickly, giving it a kind of elastic rebound like a super-ball. [5]
7. Fluids move through the fascial network.

Helene Langevin, PhD, a research scientist working at the University of Vermont has done research that suggests an overlap between the fascia and the channels and collaterals. She and her colleagues noticed that the insertions and attachments of the muscles and fascia create lines of pull that are like the grain in wood or warp and weft of a rug. They effectively demonstrated that many acu-points lie directly over areas where there is a fascial cleavage –where sheets of fascia diverge to separate, surround and support muscle bundles.

Dr. Langevin also posits that when a needle is inserted and manipulated, it is grasped by the connective tissue as a result of collagen and elastic fibers winding and tightening around the needle during needle rotation. This may create a mechanical coupling between the needle and the tissue. Manipulation of the needle then transmits a mechanical signal that passes through the connective tissue. Langevin speculates that this may be the biomechanical mechanism for the sensation of De Qi – the sensory component perceived by the patient as an ache or heaviness in the area surrounding the needle. The subsequent transduction of this mechanical signal to a cellular response may underlie some of the therapeutic effects of acupuncture both locally and at remote locations. [6]

In the martial arts and Chinese Medicine, the concept of Qi is intimately bound up with the body’s sensory and communications network on many levels. In relationship to the martial arts, the concept of Qi has to be looked at in connection with the Six Harmonies and Nine Sections, which describe the internal and external connection and body alignments necessary to produce connected, agile movement and refined whole-body power.

Qi is said to flow through the meridians. As Tai Ji expert Mike Sigman points out, the Sinew Channels, which are intimately bound up with the fascial network of the body, are likely the mechanism by which Qi and power are intimately connected. The Sinew Channels “knot” and “wrap at the joints, which both provide the joints with structural joints integrity, and allow then to generate physical force. The nexus of these forces is in the Dantian and Mingmen, which lie inside the lower abdomen and lower back. Here, the pressure of the breath combines with the Sinew Channels and the bow-like structures of the spine and limbs to generate and release power. [8]

[8] Qi of Martial-Arts and Qi of TCM: Reconciliation. From Internal Strength by Mike Sigman. http://mikesigman.blogspot.fr/2015/06/qi-of-martial-arts-and-qi-of-tcm.html