Monks, Meditation, and Mountains: The Body as a Sacred Landscape in Daoism: Part 4

Daoist Immortals are associated with mountain peaks, the sacred pivots between the energies of Heaven and Earth. Monks Meditation and Mountains examines the image of the mountain as sacred landscape and its reflection in the microcosm of the body in Daoist meditation and inner alchemy. In part 4 of this article we continue to look at the Mountain (Gen) Trigram and Hexagram and their role as symbol of inner stillness and meditation.

Monks, Meditation, and Mountains: The Body as a Sacred Landscape in Daoism Part 4

The Gen Diagram and Daoist Meditation

The Gen hexagram, mountain over mountain, designates stillness or stopping doubled, like a mountain range impeding forward movement. Gen has often been associated with the stillness of meditation and contemplation. While sitting in meditation, one is shaped like a mountain. [31] In meditation, one sits quietly without movement, attending to the breath, and letting the movements of the mind become still, letting the heart become tranquil. The mind turns inward, oblivious to one’s sur-roundings, resembling the pristine purity and stillness of the mountain. Movement, represented by the strong yang line at the top of the trigram, stops. There is still movement but it is the movement of the body within the body; internal, inwardly directed movement. 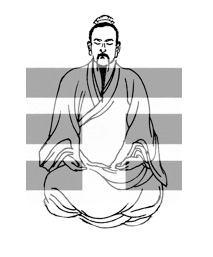 In the Ming Dynasty, Lin Zhaoen established the syncretic “Three Teachings School”, which was characterized by an interweaving of Daoist, Buddhist and Confucian thought. Lin used imagery from the Yi Jing, particularly the Gen hexagram, to help image and explain a nine-stage process of Daoist meditation. [32] The back is related to water, to the kidneys and the north. Water is pushed up the back (through the Du and Ren Channels) to reach the heart. In this way fire and water and Jing, Qi/Breath and Shen can connect and inter-transform. Lin advocated imitating the Gen hexagram in order to seek stillness and calmness so that Kan and Li (Water and Fire – the kidneys and heart) and Qian and Kun (Heaven and Earth – the brain and Dantian), could connect. Thereby the Qi/Breath could freely flow. [33]

The Gen hexagram is shown below superimposed on the body of the meditator. The first two lines in the lower trigram represent the stillness of the legs (knees and ankles) in the meditation posture. The third (yang) full line symbolizes the concentration of Qi/Breath and intention in the lower abdomen and the opening and holding power of the kua. This also represents the full middle line of the trigram Kan-Water, which is the lower “inner trigram” (see discussion below). The middle line of Kan-Water also represents the True Yang hidden within yin. The empty torso and chest, symbolized by the two yin lines in the upper trigram, are the empty and quiet heart and spirit. The fifth broken (yin) line represents the True Yin hidden within yang – the middle line of the Li-Fire trigram. This relative emptiness in the chest gives the Shen a place to reside. When the heart is calm and there is stillness and emptiness inside, the strong third and sixth lines can move freely – the Qi/Breath can circulate from Dantian upward into the brain and back to Dantian following the Micro-Cosmic Orbit. 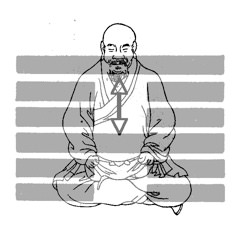 Each trigram is said to have an inner or nuclear hexagram that expresses the original hexagram’s essential, internal nature and qualities. This central, inner quality can be expressed or remain latent, depending on the circumstances. [34] The inner hexagram is formed by creating a “lower inner trigram” from lines 2, 3 and 4 and an “upper inner trigram” from lines 3, 4 and 5. The inner trigrams for the Gen hexagram as diagrammed below are Zhen-Thunder over Kan-Water. This forms Gen’s Inner Hexa-gram: Jie. Jie can mean: release; [35] relief; disentanglement; setting free; unfastening. [36] 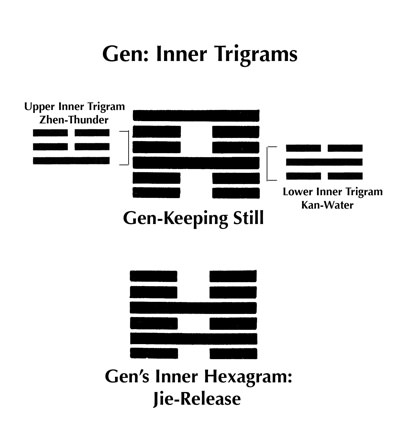 Thunder above Water indicates thunder and rain. When Heaven and Earth allow release, the result is thunder and rain which breaks a deadlock or obstacle. The dark and wild storm indicates a release of pressure that has built up, creating danger and obstruction. Now the skies clear, the clouds are gone and the pressure is relieved. All living things (i.e. plants and trees) have been nourished and rejuvenated by the rain.

Thunder represents movement and Water can indicate danger. Through movement, one avoids danger and finds a safe place. This is indicated by the strong fourth line which now can freely move upward away from danger and impasse. Once one is out of danger it is useful to pause, to consider the situation in stillness so that one can appropriately move in a new direction.

Jie also means to untie or unfasten. In relationship to meditation this implies untangling the knots and entanglements in one’s life which create impediment and restrict forward movement. These impediments are akin to the clouds that gather and obstruct the clear sky. [37] They cannot be forcefully cleared, but must be released and let go. This release is initiated through inner observation, stillness and letting go. Thunder and Rain perform their roles: this is the image of Release. In the same way, the noble man forgives misdeeds and pardons wrongdoing. [38]

[32] Fathoming the Cosmos and Ordering the World: The Yi Jing and Its Evolution in China, by Richard J. Smith. Charlottesville NC and London: University of Virginia Press, 2008, p. 166.

[34] The I Ching Handbook: Decision Making With and Without Divination, by Mondo Secter, Berkeley, CA: North Atlantic Books, 2002, p. 57.

[35] The Classic of the Changes: A New Translation of the I Ching as interpreted by Wang Bi,translated by Richard John Lynn. New York: Columbia University Press, 1994, p. 380.

[38] The Classic of the Changes: A New Translation of the I Ching as interpreted by Wang Bi,translated by Richard John Lynn. New York: Columbia University Press, 1994, p. 381.