Monks, Meditation, and Mountains: The Body as a Sacred Landscape in Daoism: Part 3

Daoist Immortals are associated with mountain peaks, the sacred pivots between the energies of Heaven and Earth. Monks Meditation and Mountains examines the image of the mountain as sacred landscape and its reflection in the microcosm of the body in Daoist meditation and inner alchemy. In part 3 of this article we look at the Mountain (Gen) Trigram and Hexagram and their role as symbol of inner stillness and meditation.

Monks, Meditation, and Mountains: The Body as a Sacred Landscape in Daoism Part 3

In the Yi Jing (I Ching), the “Book of Changes,” the image of the Gen diagram is the Mountain. Gen refers to that which is “Stationary”, and to “Restraint,” “Stillness” and “Keeping Still.” In its application to man, this hexagram turns on the problem of achieving a quiet heart and mind. [13] The Gen hexagram is simply the Gen trigram doubled – Gen above Gen. The structure of the trigram shows a solid (yang) line above two broken (yin) lines. This solid line above the two yielding lines, shows that yang has ascended to the top. With no room to ascend further, this strong moving line stops and rests. This implies restraint and stillness.

Both the trigram and hexagram diagram movement. This movement can relate both to a situation or configuration of events and/or to movements inside the body, including the movements and interactions of the Qi/Breath, Jing and Shen. The structure of the diagram can best be understood by starting with the Kun-Earth Trigram. The Earth trigram is composed of three broken (yin) lines. A mountain is an extension of Earth. It is Earth raised to its highest point. The point where Earth stops, the closest it can approach Heaven, is at the top of a mountain. This is represented by the strong line at the top of the Gen Diagram.

When a solid line appears at the bottom of Kun-Earth, it becomes Zhen-Thunder, representing excitation, arousal, emergence, movement and creativity. The solid line at the bottom of Zhen can advance and move upward, filling the empty space by following the unobstructed path created by the two pliable yin lines above.

As action and movement emerge, they build. The solid line advances to the central position designating Kan-Water. Its attribute is flowing, continuing – action fluidly moving and conforming to the terrain and circumstance. In the Kan diagram, the path is still open for the strong, moving central line to advance. When the solid line advances to the top movement stops. This is Gen-Mountain. [14] 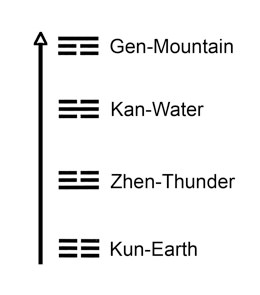 Action must be balanced by stillness, because movement is generated by stillness, by keeping still. Stillness is in itself a type of action and all actions must be in accord with the situation. Movement and stillness must take place at the appropriate times. Too much action and things spin out of control. Too much stillness and there is stagnation and decay. In the order of the hexagrams, Gen (Hexagram 52) follows Zhen (Hexagram 51). The solid lines within each trigram of Zhen have moved upward to the top and stopped. After movement there must be stillness and restraint so that movement can start again. Jian (Hexagram 53) follows Gen. Jian signifies “gradual advance” or “gradual development.” The Xun-Wood Trigram is now over the mountain trigram. Forward growth, and upward movement begin again – the third yang line moves upward slowly and gradually like a tree growing on the mountain. The movement is orderly and appropriate. Xun is also associated with Wind. Wind represents penetration and insight. Appropriate movement can only occur when overseen by the discerning penetration of wind. [15]

The upper and lower trigrams of the Gen hexagram are the same and do not interact. They stop to rest in the right time and right place.[i] In each trigram, the yang line is at the top attempting to move upward while the yin lines are below and moving downward. Yet the downward movement of the yin lines in the upper trigram is blocked by the strong yang line at the top of the lower trigram. Thus there is stillness.

The Chinese character or ideogram, for Gen is 艮, meaning blunt, tough, or chewy. The upper part of the ideogram is the eye radical. Originally this character was a mirror image of 見 (见 jian): to see; to catch; sight of; to meet with; to be exposed to; a person with a big eye. The bottom of the character designates to turn around, as in turning around to look. Some commentators feel that this action of looking signifies “keeping still.” Others say that this “turning to look” is the “inward looking” associated with meditation practices. [16]

The great commentary on the Yi Jing associates Gen with 止 (zhi): [17] stop; halt; arrive at; suppress; prohibit; stay; detain. [18] The ancient oracle bones character resembled a foot, [19] and was essentially picture of a left footprint. The toes were at the top, the heel at the bottom. Zhi was sometimes written so that it appeared as part of the character 走 (zou: go; walk; leave), 足 (zu: foot), and 步 (bu: step). Zhi now means “stop” (i.e.: hold the feet still). [20]

The decision or judgment related to the Gen Hexagram images the back of the body. Stillness or restraint takes place with the back. This leaves the eyes unimpaired so that one does not obtain the other person.[21] He goes into that one’s courtyard, but does not see him there.[22] If restraint operates through the back, through not seeing the other person, then there is no face-to-face confrontation. This means that one can apply stillness and restraint without separating the person involved from the object of their desire. [23] Because one’s eyes are not involved, one is naturally still, without effort. This also indicates the posture used in Daoist meditation. Stillness can only be supplied through the back and its connection with the Ren and Du Vessels. If the back is straight, still and aligned, [24] if the eyes look inward and do not see, then restraint and stillness can take place naturally, allowing the Jing and Qi/Breath, to move of their own accord.

The following line commentaries primarily quote the Richard John Lynn translation (The Classic of the Changes: A New Translation of the I Ching as interpreted by Wang Bi, pp. 468-70):

Line 1 – First Yin: Keeping Still (restraint) takes place with the toes, so there is no blame and it is fitting that such a one practices perpetual constancy. Stopping the toes and feet is the way to keep the whole body still. This is a yin line in a yang place; keeping still is the way to prevail. The feet are the location of the most yin acu-point Yong Quan, the “bubbling well” point, from which yin Earth energy enters and wells up in the body. Stopping, standing still and being quiescent allows yin to grow and flourish in the body.

Line 2 – Second Yin: Keeping Still takes place with the calves, which means that this one does not raise up his followers. His heart feels discontent. The calves and the heel tendon are the root of the Yin Qiao and Yang Qiao Extraordinary vessels. The calves allow us to spring into movement. However the calves cannot raise up and move because below the toes are still and above the strong yang line holds the dominant position. Although this is a yin line in a yin place it is subordinate to the third strong line. Therefore it can neither move nor be still. This can stagnate movement within the Qiao vessels leading to disturbance of the inner spirits. Not only is he unable to raise up his followers, he cannot withdraw and obey the call to quietude. [25]

Line 3 – Third Yang: Keeping Still with the midsection, which may split the back flesh, a danger enough to smoke and suffocate the heart. Keeping still and restraint here imply a disconnect between the upper and lower trigrams, symbolizing a split between those lines above and below this place. In terms of meditation it implies a disconnect between mind and body, heart and kidneys, Jing and Shen. If there is blockage and restraint in the middle of the body, the Qi/Breath cannot move and transform. This damages the center and the back, causing the heart-fire to burn too hot, thereby suffocating the spirit. It can also represent someone who stays still in the extreme, preventing harmony with the four other yin elements that surround this line. [26］ In the Wilhelm-Baynes translation of the Yi Jing, the commentary reads

The hips are the boundary of yin and yang, and in Daoist meditation the sacrum is the first gate through which the Qi/Breath must pass in order to rise up the spine and the Du channel. If there is tension or rigidity here the heart will ultimately feel suffocated and blocked.

Line 4 – Fourth Yin: Keeping Still takes place with the torso. There is no blame. The torso here refers to the area in the chest where the heart lies. The yin line is in a yin position and the yin element has an open and empty space in the center. This helps the heart to be calm and still. Upper and lower, fire and water and Jing and Shen are connected and the Qi/Breath can move freely. A quiet and open heart is one of the conditions for meditation

Line 5 – Fifth Yin: Keeping Still takes place with the jowls, so this one’s words have order and regret vanishes. The mouth does not say arbitrary things, but knows where and when to talk and to stop talking, so that one’s speech is appropriate. When one chooses one’s word carefully, the inner spirits are calm and the circulation of the breath is not disturbed. This facilitates the inter-transformation of Jing, Qi/Breath and Shen.

Line 6 – Sixth Yang: This one exercises Restraint (Keeping Still) with simple honesty which results in good fortune. The top yang line is at the peak of stillness and restraint. This weight at the top needs honesty and modesty to reinforce it so that it does not topple or fall into errant practice. One should not consider matters that are beyond one’s position, things that are the concerns of others. Instead, focus on the business at hand, your own inner stillness. Then you can find the serenity of the still mountain [28] and your interactions with others become appropriate and honest. This top line of the hexagram can also represent the sage. Chapter 66 of the Dao De Jing is titled, “How to Put the Self Behind.” [29] The text reads:

If therefore the Saint wants to be above the people,

He by his words submits to them.

If he wants to precede the people,

With his personality he puts himself behind them.

When therefore the saint dwells above, the people are not weighted down

When he stands forth, the people are not hurt.

Therefore the empire is glad to push him on and gets not tired of him.

Because he does not contend,

Therefore nobody in the empire is able to contend with him. [30]

[16] Zhouyi the Book of Changes, a new translation with commentary by Richard Rutt. London and New York: Routledge, 2002.