Monks, Meditation, and Mountains: The Body as a Sacred Landscape in Daoism: Part 2

Daoist Immortals are associated with mountain peaks, the sacred pivots between the energies of Heaven and Earth. Monks Meditation and Mountains examines the image of the mountain as sacred landscape and its reflection in the microcosm of the body in Daoist meditation and inner alchemy. In Part 2 of this article we look at other examples of the mountain image as a metaphor and aid to meditation.

The Daoist Immortal pictured below in a painting by Liang Kai (梁楷, c.1140-1210) in the Song Dynasty is solid and weighty like a mountain. 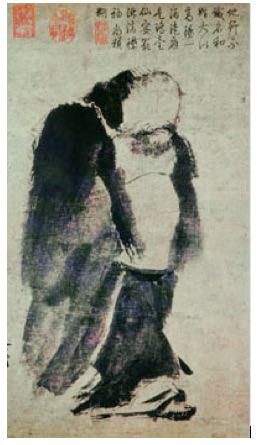 He resembles famous paintings of mountains that containing a sense of cosmic and earthly Qi combining in the landscape and in ourselves.

One can almost see and feel the interpenetrating breaths of Heaven and Earth emanating from the landscape. Similar paintings and diagrams were made to represent the inner landscape of the body. The Yuan Qi Ti Xiang Tu (元氣體象圖), Diagram of the Body’s Original Qi, is from the 14th century. 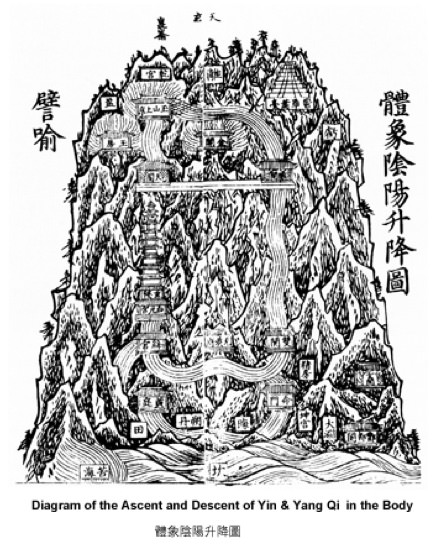 The top of the head contains the Kunlun Mountains which contain the Ni Wan. In the lower section of the mountain is the Yellow Court (Huang Ting) located at the center, where all roads meet. [9] The painting below by Fan Kuan from the Northern Song Dynasty also conveys the dynamic interplay of cosmic and earthy Qi.

A similar feeling is conveyed by Diagram of the Ascent and Descent of Yin and Yang Qi in the Body (Ti Xiang Yin Yang Sheng Jiang Tu 體象陰陽升降圖) from Master Xiao Yin Sou’s commentary on the on the Scripture of Slavation (ca early 1200’s).

The “Ocean of Qi” (Qi Hai), associated with the Dantian lies at the bottom of the mountain. The ocean rises to the Yellow Court on the left and Mingmen on the right, depicted as two gates. Above the Mingmen is another pass, the Shuang Guan (雙關), or “Paired Pass.” This is another name for the Jia Ji pass (夹脊關), literally “squeeze the spine,” one of the three passes through which Qi must pass to rise up to the head. The Jia Ji Pass, lies at approximately the level of the 11th thoracic vertebrae. According to Catherine Despeaux and Livia Kohn, the vertical streams connected in a loop on the right and left of the diagram may represent the Ren and Du meridians. [10] The pagoda on the left, as in the Nei Jing Tu, represents the throat. On the bridge connecting the two streams is the Heavenly Gate (Tian Que 天闕) on the left, which may be the nose, the gateway of the celestial Qi. Above the bridge is the Golden Gate (金闕 Jin Que) which may refer to the production of saliva stimulated by the tongue on the roof of the mouth during meditation, or to another mystical cavity in the center of the head. [11] The tower in the upper right corner has nine stories which represent the nine sections of the brain. [12]

Mountains convey the union of the Earth and Heaven which occurs both in the external world and within us as human beings. They also convey a sense of pristine inner stillness associated with meditation and states of altered consciousness. This idea is also present in the image of the Mountain as it is understood in the Yi Jing (Book of Changes)