Monks, Meditation, and Mountains: The Body as a Sacred Landscape in Daoism: Part 1

In Daoism the sacred peaks are viewed as numinous pivots between Heaven and Earth. Mountains in China often conjure up images of Daoist immortals, perfected beings who have transcended Yin and Yang and unified with the Dao, living among lofty cloud enshrouded peaks. Mountains are places were cosmic Qi is the most refined and where potent herbs and minerals, the ingredients of Daoist elixirs of immortality, can be found by the initiated. 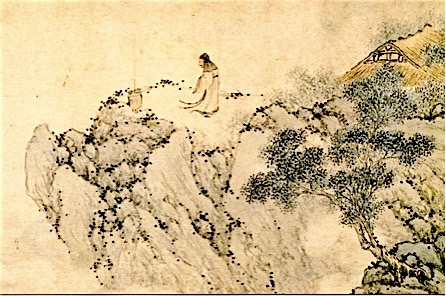 The worship of Five Sacred Peaks and other holy mountains was central to Daoist cosmology in the Han Dynasty (206 B.C.E – AD 220). The Sacred Peaks Five (Wu Ye “Five Summits”) symbolized the four cardinal directions and the center of the world:

Beyond these five, many other peaks are also regarded as sacred sites. For example:

The Kunlun Mountains (Kunlun Shan 崑崙山) form a long mountain chain extending more than 3,000 kilometers in Northern China. Mount Kunlun represents the One, or the Dao, on Earth and is thus parallel to the Northern Dipper as the representative of the Dao in the Heavens. In the Daoist cosmology of Shangqing Daoism, the Northern Dipper and the Kunlun mountains form the central axis of the universe, regulating and controlling everything. “Beyond its function as a universal center and axis mundi, Kunlun is also one of the paradises and palaces of Heaven, traditionally described as a high mountain surrounded by deep water.” Immortals reside here in the Heavenly Walled City, a magnificent metropolis covering and area of a thousand square miles, full of golden terraces and jade towers. [1}

The first to visit this paradise was, according to the legends, King Mu (976-922 BCE) of the Zhou Dynasty. He supposedly discovered there the Jade Palace of Yellow Emperor, the mythical originator of Chinese culture, and met Hsi Wang Mu (Xi Wang Mu), the “Spirit Mother of the West” usually called the “Queen Mother of the West”, who was the object of an ancient religious cult which reached its peak in the Han Dynasty, also had her mythical abode in these mountains.

The Body As a Mountain

The Chinese believed that the cosmic axis, or world pillar (axis mundi), the place where sky and earth meet, was in Northern China at Mount Kunlun. The summit of Kunlun was thought to touch the polestar. [3] In the Nei Jing Tu the Daoist diagram of the internal circulation of energy, nine mountain peaks are pictured forming the top of the head. They are said to represent the Kunlun Mountains. [4] Daoists often refer to the head as Mount Kunlun. In the Daoist worldview, Kunlun is a mountain of the western seas, considered to be the home of the Daoist immortals. However, it is also the name of a region in the brain, a cavern in which the Ni Wan (the “mudball” – brain) resides. [5]

Diagrams like the Nei Jing Tu show a person seated in meditation, their body configured like a Chinese landscape painting. In the head, there are high mountain peaks; in the spine, a winding mountain path; in the neck, a many-storied pagoda; in the lower abdomen, a deep body of water. The word for landscape in Chinese is Shan-Shui (mountain-water). The Chinese view mountains and water as the very quintessence of nature. Hence mountains have been referred to as the “bones” of the earth, and water as it’s “blood.” [6] 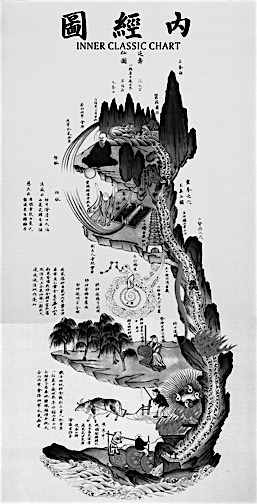 In the Nei Jing Tu (above), the spine and head are pictured as Mountain ranges and the Three Passes (San Guan) arte pictured as gates along the mountainous ridges of the spine. These are areas of the spine and back through which the unobstructed passage of Qi is difficult. The practitioner of Daoist meditation must find the pathway along the spinal ridgeline in order to ascend (guide transmuted Essence and Qi) to the summit of the mountain – the head.

The inner world depicted in the Nei Jing Tu is not just a representation. This landscape depicts the movements of the Qi and breath through the human body. However, the Qi it depicts flows not just through the body, but through Heaven and Earth as well. What shapes and transforms the terrain “out there,” equally shapes and transforms the terrain within us. When looking at a landscape, the painter sees the places where Qi collects and dissipates, the interplay of coming into being and fading back into the indeterminate primordial state. In Chinese landscape painting, the painting is permeated with precisely the same Qi that permeates the landscape itself. [7] The Qi/Xiang or Qi/Breath/Image [8] is exactly the same externally as it is “inside” the painting. In the Nei Jing Tu what is “outside us,” perceived in terms of configurations of the Qi in the world around us, is depicted as simultaneously “inside us.” There is no separation, because the same configurations of Qi and breath bring into being and flow through everything – the world around us, the landscape, the painting of the landscape, the inner landscape of our body and even the painting of the inner landscape of our body.

[6] Mountains and Water in Chinese Art, by Karin Albert http://www.venuscomm.com/montainsandwater.html

This article was first published in Bonsai Clubs International, Sept./Oct. 1988.

[7] Daoism Explained: From the Dream of the Butterfly to the Fishnet Allegory, by Hans-Georg Moeller, Chicago and La Salle Illinois: Open Court Publishing, 2006, p. 115.

[8] The Great Image Has No Form, or On the Nonobject Through Painting