Gao Wen Chang was a direct disciple of Yin Fu, who was one of the most famous disciples of Dong Hai-Chuan, the founder of Ba Gua Zhang. Gao Wen Chang also studied with another of Dong’s disciples named Song Yong Xiang, and later became a disciple of Liu De Kuan.

Liu De Kuan was a unique individual. A talented martial arts prodigy in his youth, Liu’s skill with the spear earned him the nick-name “Big Spear.” When Liu arrived in Beijing near the end of the Qing dynasty he studied with both Dong Hai Chuan and Cheng Ting Hua. Liu either studied, or was friends with, many of the great martial artists of his day, including Li Cun Yi, the famous Xing Yi boxer. Liu De Kuan is credited with the creation of the 64 hands, which are also referred to as the Ba Gua linear forms.

Guo Gu Min studied directly with both Liang Chen Pu (a direct disciple of founder Dong Hai Chuan), and Liu De Kuan. Guo Gu Min never married, and devoted himself exclusively to the martial arts. He was renowned in the Beijing area for his extraordinary skills in Ba Gua Zhang. From Guo Gu Min, Gao Zi Ying learned the 64 hands of Liu De Kuan and many other Ba Gua skills. 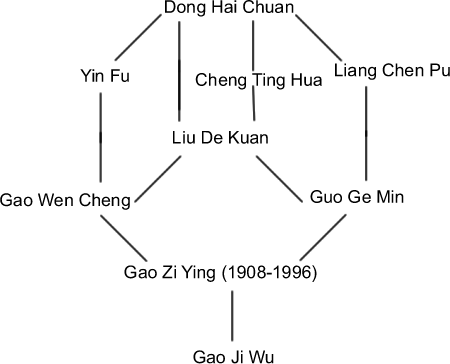 Gao Zi Ying mastered many traditional weapons and his ability in pushing hands and Qin Na (seizing and capture techniques) was superb.

Gao Ji Wu inherited the martial arts traditions taught by his Father and Grandfather. Today Master Gao teaches Xing Yi Quan, Ba Gua Zhang,  Tai Ji Quan and elements of Da Cheng Quan. He is a past President of the Beijing Ba Gua Association and has been a coach of many tournament champions in Ba Gua Zhang and Tai Ji Quan competitions.

I met Master Gao in 2001. I was immediately impressed by his smooth fluid movements and the continuous winding quality of his circle walking. When he saw that I knew the basics, he immediately began to teach me Lian Huan Ba Gua Zhang (Ba Gua Zhang Chain Linking form). Master Gao’s  instructions and applications were precise and to the point. In that first meeting he made clear his very serious desire to impart the real art of Ba Gua Zhang so that the teachings of his father and grandfather would not be lost.

Over the years I went back many times to study with Master Gao, and each time he imparted gems of knowledge that enhanced my understanding of the art. In a single lesson on the crane step and kicking Master Gao imparted the essence of Ba Gua’s unique kicking skills, showing me how to screen kicks with the hands and hide the movement of the leg with in the body alignments. I can remember seeing his hands move and then the sudden surprise of feeling his knee tap my ribs.

Master Gao is a generous teacher, with a deep knowledge of Ba Gua. He and his school brothers graciously taught us many aspects of Ba Gua Zhang, always making sure that we perform the movements and their applications correctly, with proper Jin and spirit. Master Gao is a very humble and dedicated individual, who sometimes downplays his high level of skill. When Master Gao taught in NYC, I asked him to teach Qin Na. He initially tried to avoid teaching Qin Na, saying that it was not his specialty, but when I pressed him, he rose the the occasion, effortlessly presenting a series of devastating wrist and elbow Qin Na techniques that impressed even the most hard core of the New York City students.

Master Gao’s emphasis on both Ding Shi (Fixed Posture) Ba Gua and Ding Shi applications was transformative for all of us who studied with him, and his smooth and effortless mud-stepping, inspirational. Many of the IAI students who were lucky enough to study with Master Gao have taken to heart his stress on the fundamentals – especially the practice of Ding Shi Ba Gua Zhang and the Mud-Walking step (Tang Ni Bu). Master Gao not only imparted the importance of the step and circle walking to build power and smooth whole body movement, he also showed us how to use Ba Gua stepping gain tactical advantage, and to set up throws, trips, kicks and strikes.

Master Gao’s big heart and openness is evident in his generosity to myself and to ourIAI students and instructors.  From Master Gao we have learned  countless applications, the 64 Hands and 72  Techniques, Ba Gua Yin Yang Staff, Ba Da Zhang (Eight Big Palms), Lian Hua Ba Gua Zhang, the Pre-Heaven 8 Animal Form, the Ba Gua Ring Rotating Sword, the Ba Gua Slicing Saber, Liu De Quan’s Ba Gua Spear, as well as the Rooster Claw Mandarin Duck Knives (Ji Zhao Yuan Yang Yu). We were honored when Master Gao accepted our invitation to become a senior advisor to New York Internal Arts. We all owe him a great debt, and look forward to working with him more in the future.

Check out this beautiful tribute to Master Gao Ji Wu released in January 2020. Many of us have fond memories of the Beijing park seen in this video where Master Gao teaches every morning.