Master Li Gu Chang’s instructions on Tai Ji Quan, found in his book, Tai Ji Push Hands Training Instructions (太极推手演练指导Tai Ji Tui Shou Yan Lian Zhi Dao), are deep and profound. In this post we present two of the “Tai Ji Songs” written by Master Li that detail the fine points of the movements within the Tai Ji form – the “Opening or “Preparation Form”, and “Grasp the Sparrow Tail”. 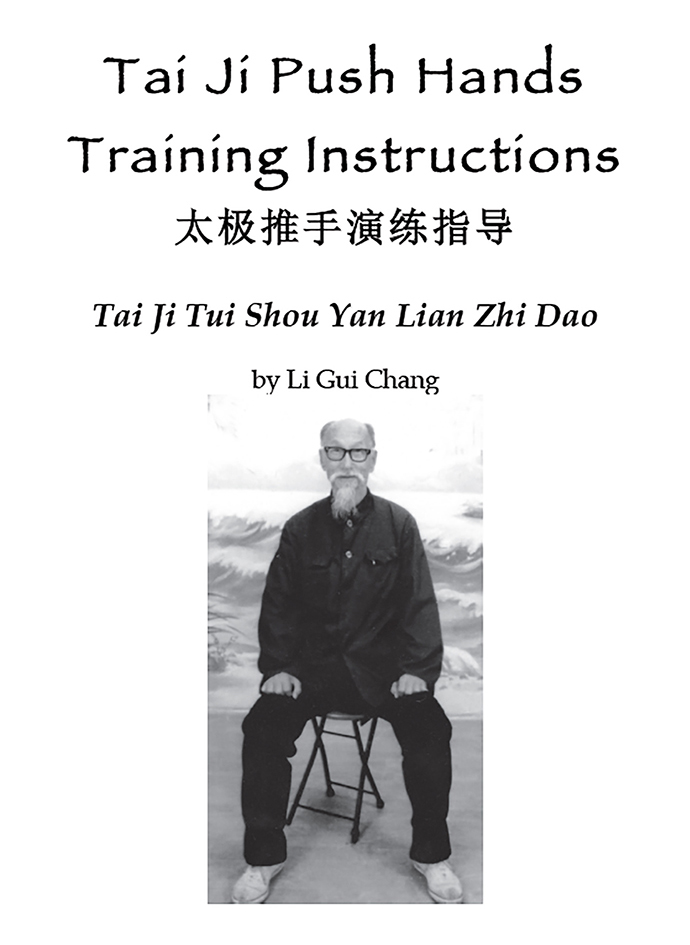 Inhale the new exhale the old Qi must circulate,

Absorb the true Jin and cook in the tripod. [1]

Sink the wrist and sink the shoulder so the posture is natural.

Receive Qi uphold the hands, raise from Dantian ascend to the chest.

The abdomen gathers Jing Qi (Essence-Qi) and raises it fully,

When inhalation changes to exhalation,

Relax the abdomen and press the hand, returning to the origin,

Both the interior and exterior are mutually engendered with a single intention.

Drive out evil and usher in and increase Jing Qi.

In appearance like the full moon, naturally round on the fifteenth day.

The hand goes out in ward off (Peng) [6] containing like an enclosing wall,

Even if you encounter a formidable adversary [you] are not flustered.

Change into a circle to draw leftward and rightward,

The back standing Jin is the central beam.

Lift the hands with Peng to defend all things,

Avoid being too firm or tense in the upper posture.

Change Roll Up (Lu) into Squeezing (Ji) following the intention, containing the chest,

Raise the back and avoid leaning.

Peng, press (An) and double pushing (Tui) must be skillful,

Roll up (Lu) comes and Squeezing (Ji) goes according to the situation, [8]

Peng Upward and press downward (An) following the changes, [9]

Firmness and yielding mutually assisting too wonderful for words.

The Tai Ji circling method is wondrous and inexhaustible,

When one understands the subtleties of the Central Circle,

It is possible to move a thousand kilo weight with two ounces.

Knowing the four directions is not outside the Tai Ji circle.

[1] The tripod (Ding: 鼎) is a reference to Daoist inner alchemy. The tripod represent the Qian diagram – composed of all yang lines . This represents the true yang. This may also reference “cooking the medicine” (Jing and Qi) – transforming them into Spirit (Shen)

[2] 顶劲 Ding Jin: Ding (carry on the head, push up from below); Jin (strength, energy, spirit). ie: “Propping up” Jin – energy and power pushing up from underneath.

[4] The Six Healing Sounds that vibrate in the five Zang organs and the triple heater.

[6] 掤 Bing. Literally “arrow quiver.” This character is usually Romanized as Peng and translated as “ward off”. Peng is and obscure word that suggests the idea of expanding, opening up, or releasing, as in releasing an arrow from a bow. Peng is sometimes described as releasing or pulling a cork from a bottle. It man also have something to do with the sounds these actions involve. How to Grasp The Bird’s Tail if You Don’t Speak Chinese. Jane Schorre (Berkeley: North Atlantic Books 2000) p. 19.

[8] 挤 Ji: squeeze, crowd, push, jostle. To crowd or cram – like shouldering or squeezing one’s way onto a crowded bus or train. 捋 Lu: to stroke or smooth out with the fingers, to rub one’s palm along. Can also mean to roll up one’s sleeve. Often mistranslated as “rollback” in Tai Ji books.

[9] 按 An: press down, keep one’s hand on. Like the pressing technique in massage.