Ba Gua Zhang is said to have eight basic methods of using the palm in martial applications. These eight methods are contained within Lao Ba Zhang and are also introduced and trained in the Eight Linear Palms associated with Lao Ba Zhang.

These eight methods are combined with thirty-six actions that describe hand methods (Shou Fa) foot methods (Tui Fa) and body principles (Shen Fa). All of these are contained within Lao Ba Zhang and are traditionally described by the thirty-six characters listed below. Engaging with the ideas and feelings expressed by these characters over years of practicing Lao Ba Zhang can give one many insights into the form and the principles it attempts to convey.

These 36 actions are all present in Lao Ba Zhang and should be carefully researched:

Each of the eight circular changes in Lao Ba Zhang has an associated linear expression. One Linear Form is paired with each of the Eight Circular Changes. These Linear forms are called the “Eight Hands” (Ba Shou) or the “Eight Basic Linear Forms.” The Eight Basic Linear Forms are considered to be a type of “Single Movement Practice” (Dan Dong Liang Xi 单动练习) – a bit like a boxer practicing a jab and a cross or a karateka performing lunge punches. These forms are critically important in helping one to understand and apply the actions of Lao Ba Zhang. The Piercing Palm is contained within each palm of Lao Ba Zhang and therefore is also practiced as a ninth linear form. There are three types of piercing palm:

Practicing the Eight Basic Linear Forms and the Piercing Palm has many important functions including:

The Sixty-Four Straight Line Palms were purportedly created by Liu De Kuan as a means of illustrating and remembering practical applications of the circular palms. The eight moves contained in each line are linked in sequence and illustrate an idealized yet logical set of attacks and countermoves. However each individual movement has multiple applications in combat and every part of each movement can be used. 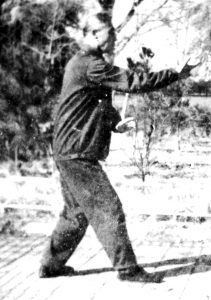 For more on the Eight Linear Palms: