Recently I received an interesting question in relation to Kidney Breathing (deep abdominal breathing) that I think is worth discussing:

When I teach Qi Gong, and talk about kidney or abdominal breathing, I am often asked how it works physiologically to inflate the abdomen as the lungs don’t go that low in the body. I know that our diaphragm goes deep down and that we inflate the lower part of the lungs but still, how can you explain that the front part of lower abdomen expands?

This is a very good and reasonable question, the answer  to which hinges to some degree on the disconnects that can easily occurs between our internal bodily feeling, anatomical pictures, functional anatomy, and internal energetics – in this case, in relation to the internal organs. 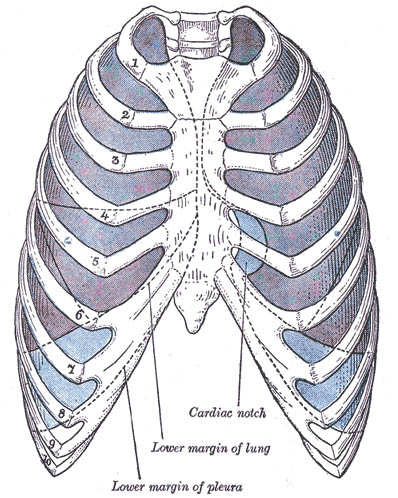 The lungs and their associated structures extend much farther on the vertical plane than most of us realize. The top (apex) of each lung extends into the lowest part of the neck, just above the level of the first rib. The bottom (base) of each lung extends down to the diaphragm. What is not always understood is that although the lungs extend down to the Level of T-6 and T-7, the inferior limit of the pleura is on a considerably lower level than the corresponding limit of the lung. The pleural recesses allow for increased lung expansion during deep breathing. In particular, the Costo-Diaphragmatic Recess allows greater downward expansion of the lungs during deep Diaphragmatic Breathing. The Costo-Diaphragmatic Recess goes down to almost T-12, allowing expansion of the pleura to move toward the kidneys and intestines. What is particularly interesting anatomically is how the upper part of the kidneys overlaps with the Costo-Diaphragmatic Recess. 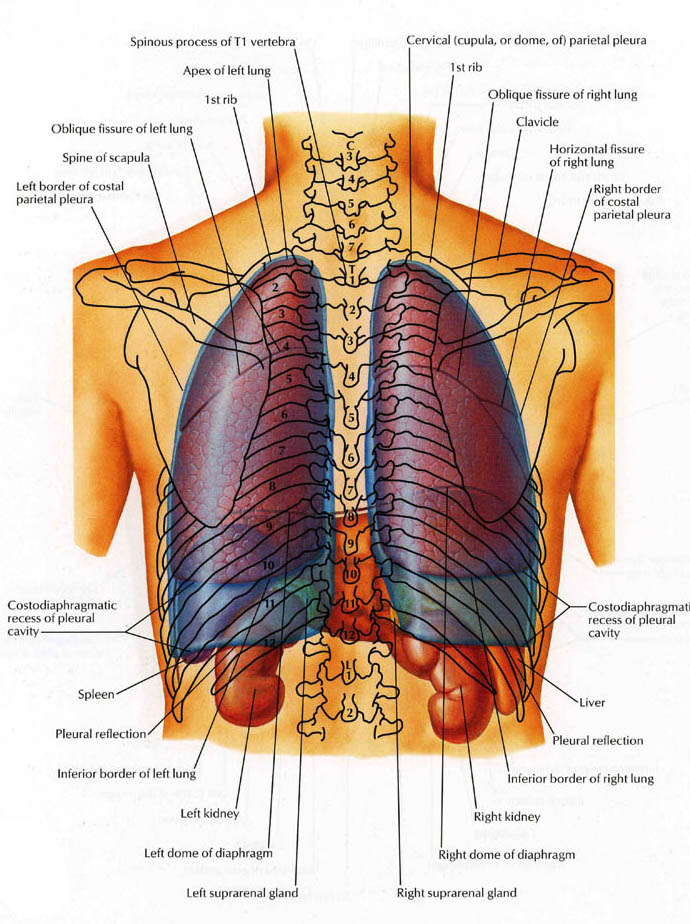 When you inhale, your diaphragm contracts (tightens) and moves downward , so that pressure decreases inside the lungs and chest relative to pressure in the atmosphere, and air flows in. This drop also creates more space in your chest cavity, allowing the lungs to expand When you exhale, the opposite happens. In exhalation the diaphragm relaxes and lifts, increasing pressure inside the lungs, so that air flows out. 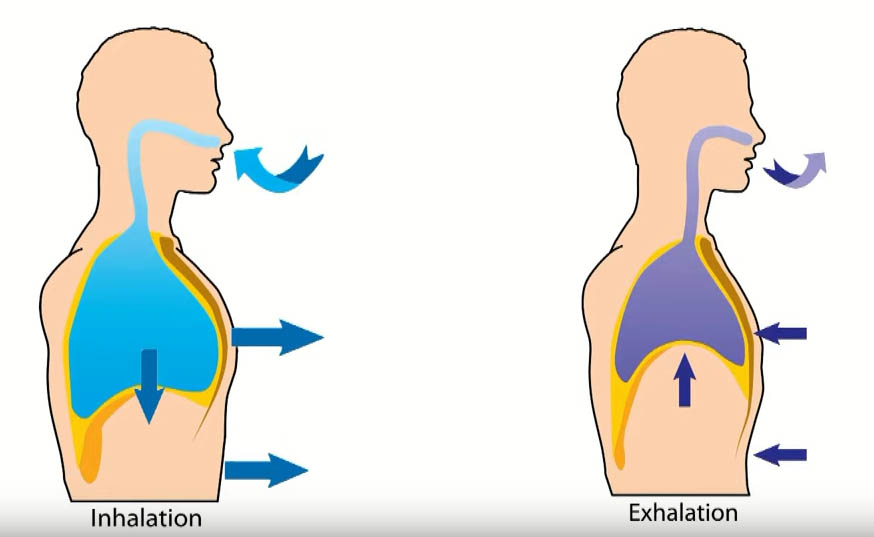 The Kidneys & the Lungs 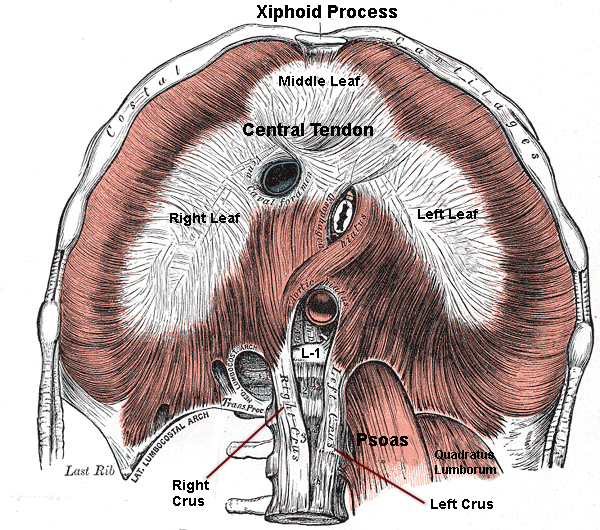 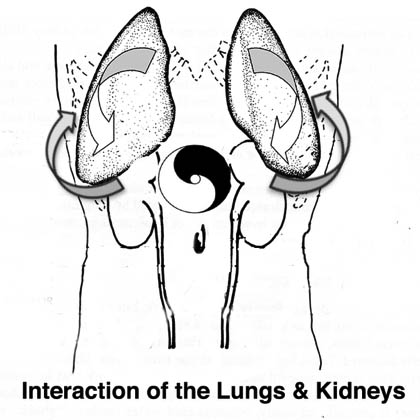 What is generally not realized is how low the bases of the lungs are in the body – they extend down to the top of the kidneys – so that the kidneys can connect with the lungs through the facial system. These structural and fascial connections help us to get a deeper understanding of the Kidney-Lung energetic relationship and its importance in Kidney Breathing.

In Chinese Medicine, the lungs are said to “spread and descend the clear, contracting Qi” so that it can enter the kidneys. The kidneys in turn “grasp” this clear Qi. These actions complete the intake of breath. The kidney’s ability to “grasp” Lung Qi is necessary for complete inhalation to occur, and this Lung-Kidney “Breath” allows for maximum exchange of gases.

The lungs disseminate the Qi, moving it outward and downward. This is intimately interconnected to the lung action of opening and closing, which in turn allows air to enter and exit the body. As Qi disseminates and spreads outward and downward through the Lung Qi Dynamic, it percolates fluids throughout the body. This action brings fluids to the lower body, the skin and the other organs including the kidneys. Another way to understand this idea is that the lungs are the mother of the kidneys. The lungs form the canopy (or dome) of the cavity which holds the organs. In a sense, the lungs are situated at the upper source of the heavenly stream of Qi that flows downward through head and into the body. The Lung Qi harmonizes with this downward stream that ultimately connects to the “ocean of water” in Dantian (associated with Kidney-Water) by disseminating fluid-like dew that percolates downward to return to combine with the “True Water” of the Kidneys.

As the drawing above illustrates, the Lung-Kidney Qi Dynamic creates a “Yin Yang Spiral” one can sense internally. In Zang Fu Tui Na techniques we harmonize the lungs and kidneys by sensing and gently guiding this Qi Dynamic so that both the practitioner and patient feel the kidneys “grasp” the Qi.