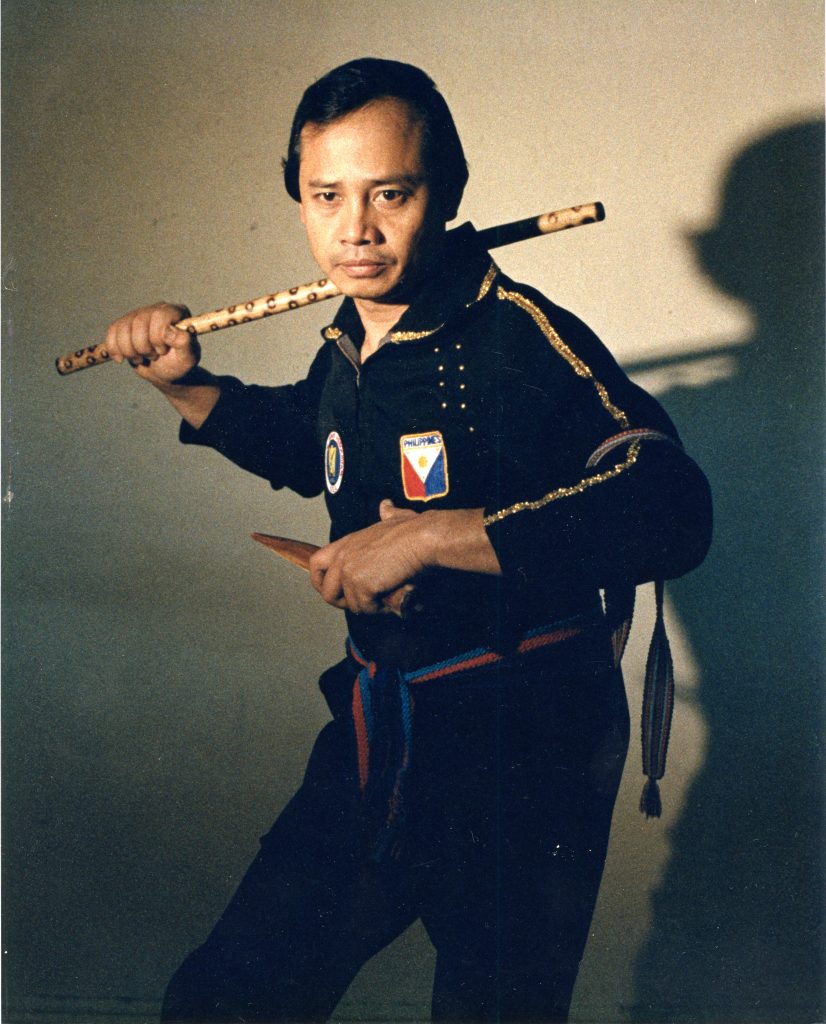 I met Grand Tuhon Leo T. Gaje in 1976. In searching for an instructor in the Filipino martial arts (FMA), I heard about a group that practiced on the roof of the Philippine consulate in New York City. When I met his group of older, fierce looking fighters swinging sticks and machetes, I was instantly hooked. At this time Grand Tuhon Gaje primarily wanted to teach instructors. He invited me to join his instructor training program and so, several times a week in between classes at college, I would journey out to Rego Park in Queens to train with a small, serious group of people. The first few years we focused on the basics of footwork and striking of the Pekiti-Tirsia system. Leo stressed footwork and we would spend hours on conditioning and footwork. Then we progressed to partner drills and sparring exercises, gradually working our way through the 64 Attacks. As the group around Leo grew, we held some small tournaments among our students in NYC and New Jersey.

In the years following I taught Pekit-Tirsia at Columbia University and at other locations in NYC. My first student at Columbia was Eric Knaus, who later went on to found train directly with Leo and to found the famous Dog Brothers group. While teaching, I continued to study with Grand Tuhon Gaje and work my way through the many methods and techniques of the Pekiti-Tirsia system: single and double baston (stick), espada y daga (stick and dagger), knife and unarmed techniques.

Leo taught many seminars to my students and I traveled with him to teach in other parts of the country. He also had me participate in several tournaments in the early days of FMA full-contact fighting.

Leo was instrumental in promoting the Filipino martial arts in the United States and abroad, and a good deal of the popularity of these arts today is due to his efforts. We did demonstrations all over New York City and New Jersey at karate tournaments, street fairs and Filipino picnics, where I got  my first taste of home-cooked Filipino food. Leo trained the NYC Auxiliary Police and we had many law enforcement officers as students. To my knowledge Leo was the first person to introduce the telescoping baton to law enforcement officers in New York. Leo was also featured is several times in Official Karate Magazine, some of the earliest articles on Filipino martial arts. Below is a photo from one of the articles. We later taught in California and in Chicago at the Degerberg Academy.

I was also able to meet Matt Marinas of Arnis Lanadam who like Leo, originally taught locally in Queens. I  got to know some of Matt’s students and even train with Matt a few times. Leo also had us cross train in Jiujitsu with Professor Florendo Visitacion (Professor V)  and in Silat with Suryadi Jafri. He also introduced me to other teachers of Filipino like Dan Inosanto, and Filemon Canete in San Miguel Eskrima. 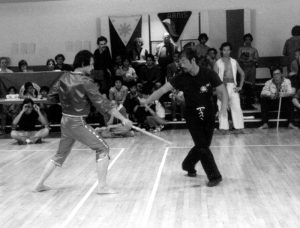 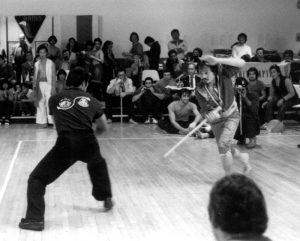 Leo Gaje and Dan Inosanto Demonstrate Together at Kali tournament

I studied with Grand Tuhon Gaje from 1976-1988. The training always focused on the basics as the building blocks of the other techniques. We practiced thousands of repetitions of the basic strikes and stepping patterns. We also practiced simple partner drills for hours at time until the body could respond at an unconscious level. Grand Tuhon Gaje emphasized counter and re-counter rather than fixed defenses. Everything was in response to the opponent movements and the situation. He taught me to analyze techniques and defenses so that I could look at other styles and spot their strengths and weaknesses.

In the early 80’s I and other instructors like Eric Knaus and William McGrath assisted Leo at the first Filipino Kali Summer Camp, held at Big Spring, Texas. About 60-7o participants attended a week of grueling training. Almost all of them were instructors in other martial arts. I was exposed to many different styles and was able to train a little with Fred Degerberg and Dan Insosanto.

Grand Tuhon Gaje made us figure out techniques rather than memorizing them by rote, something which helped me greatly in my later training in the Chinese martial arts. I remember practicing the break-in and break-out drill with him as he ratcheted up the speed notch by notch, taking me to the limits of my control. I also remember his amazing control with the stick – I can’t remember him ever hurting me or hitting me by accident. Although his power and speed were amazing he could stop the stick on your arm with just a touch. 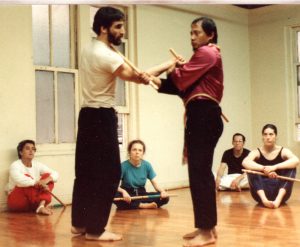 Leo T. Gaje was a very influential teacher. He provided my first very serious and complete training in the martial arts and taught me how to think critically about techniques and training methods. He was generous with himself, taking time to work with students on the most basic techniques again and again – never seeming to become bored by the repetition. He was the first teacher I had ever seen that was literally poetry-in-motion. At a seminar in NJ in the late 80’s, I  remember watching Leo glide and flow around a pillar in the middle of the room, executing only strike #1 and #2, the most basic strikes. It was like watching Fred Astaire.

Although I have not seen Grand Tuhon Leo Gaje in many years, his students tell me he is still practicing, teaching and honing his art. I can only imagine what levels he has reached.