Another excerpt from on the Fundamental Body Alignments of Ba Gua Zhang that stimulates new thoughts about the basics. This article is excerpted from Miraculous Secrets of Dong Hai Chuan’s Ba Gua Zhang (董海川八卦掌神功秘诀 )By Li Gong Chen (李功成). 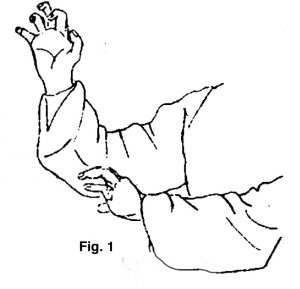 Sink the shoulder and drop the elbow, the wrist bone settles downward, and the back of the hand faces upward. The fingers separate, and hook inward, and the Tiger’s Mouth (Hu Kou) is round. The intention is in the fingertips (Fig. 1). Its function is to hook, capture and strike.

One and leads and the other is behind. The forearm twists outward, and the center of the palms face outward. The four fingers come together with the thumb tucked inside. The intention is in the fingertips. The 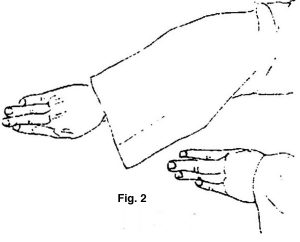 palms and the arms form a straight line (Fig 2). This palm is inserted into the armpit or ribs, and cis used to attack the armpit acu-point (Ye Xia Xue) and the Qi Ment (LIV 14) acu-point.

The elbows embrace inward and the tao wrist bones support each other (touch), The palms turn outward. The four fingers combine and Hu Kou are round. The shape is like a lotus flower and the intention is in the palm root. It is used to uphold and strike the opponent’s head. 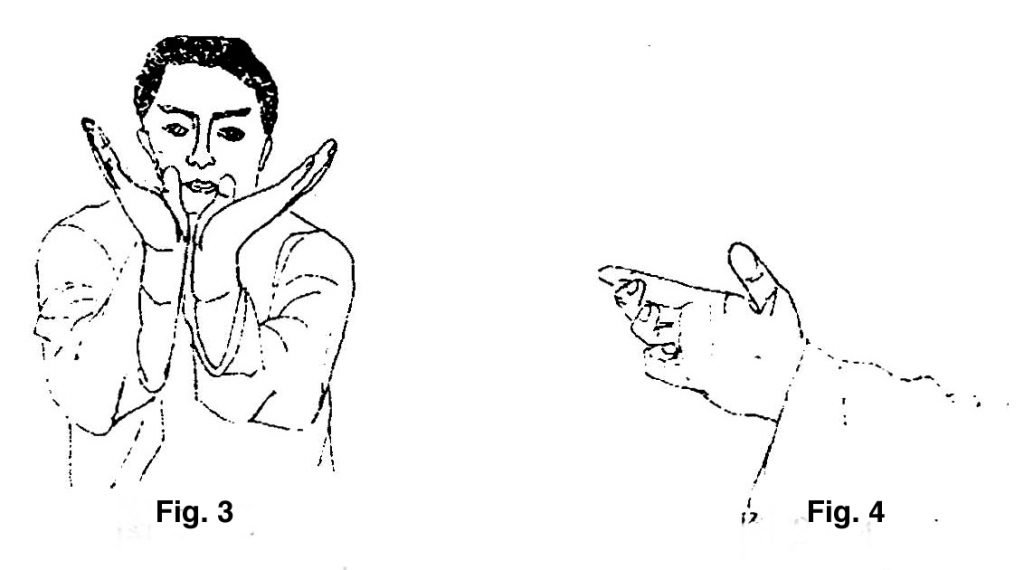 The four fingers come together and the thumb is slightly bent. The intention is in the middle finger, ring finger and little finger. In application the four fingers bend to take, turn upward, rotate, and seize (Fig. 4). 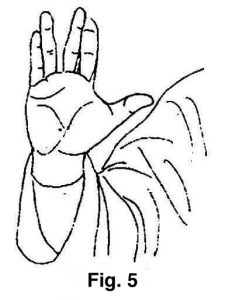 The Ox Tongue Palm is the fundamental turning palm method. Sink the shoulders and droop the elbows. The wrist bone settles downward, and the fingers point upward. The forefinger and middle fingers come together, and the ring finger and little finger come together, with space between the middle and ring fingers. Hu Kou is round. The center of the palm draws inward (Fig. 5) The purpose of this palm is to train Heaven and Earth Li Yin and Yang Li, and Yi , Qi and LI.

The four fingers come together and Hu Kou is round. The outside of the palm root settles downward. The intention is on the outside edge of the hand (Fig. 6). It is used to strike the opponent’s vital points.

The four fingers come together, and Hu Kou is round. The outside edge of the palm curves inward slightly. The intention is in the 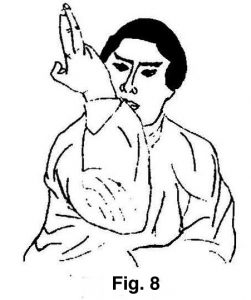 palm root and the form of the palm is like a roof tile. The palm root settles downward (Fig. 7). It is used to cut and strike vital areas.

The four fingers come together and the thumb is hooked inside. The little finger and ring finger curve and the elbow closed inward. The other hand is just below the elbow. The two arms have embracing, closing power (Fig. 2-8). The arms strike with a spiral, spinning force, changing and transforming to attack the opponent’s weak points.

Separate the five fingers. The fingertips hook like a dragon’s claws (Fig 2-9). It is used to grab, take, seize, beat and hold the enemy’s vital points.

The four fingers come together and the thumb is open and separate. The arm twists and rotates inward, so that the palm center faces outward (Fig. 10). It is used to strike, beat, poke, and cover the enemy’s vital points.

The four fingers come together and the thumb is hooked inside the palm. The arm is straight and strikes by penetrating. It is used to strike and pierce the enemy’s vital points.

Bend and hold up the leg to the rear. The force goes to the sole of the foot (Fig. 11). Hold up the foot to strike the opponents groin.

Do not go above the knee. Use the inside edge of the foot. The heel files the opponent’s lower leg (Fig. 12). 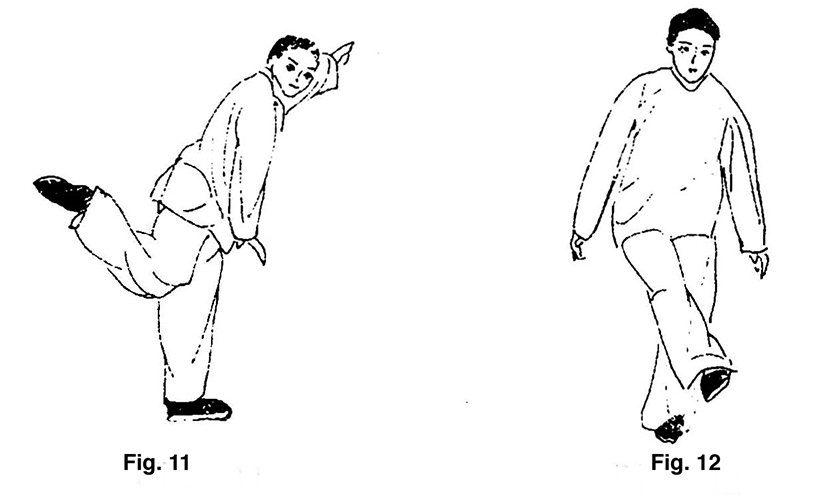 The force is in the heel and emit force violently and swiftly. Hold up the toes to tread and stomp the lower abdomen (Fig. 14). 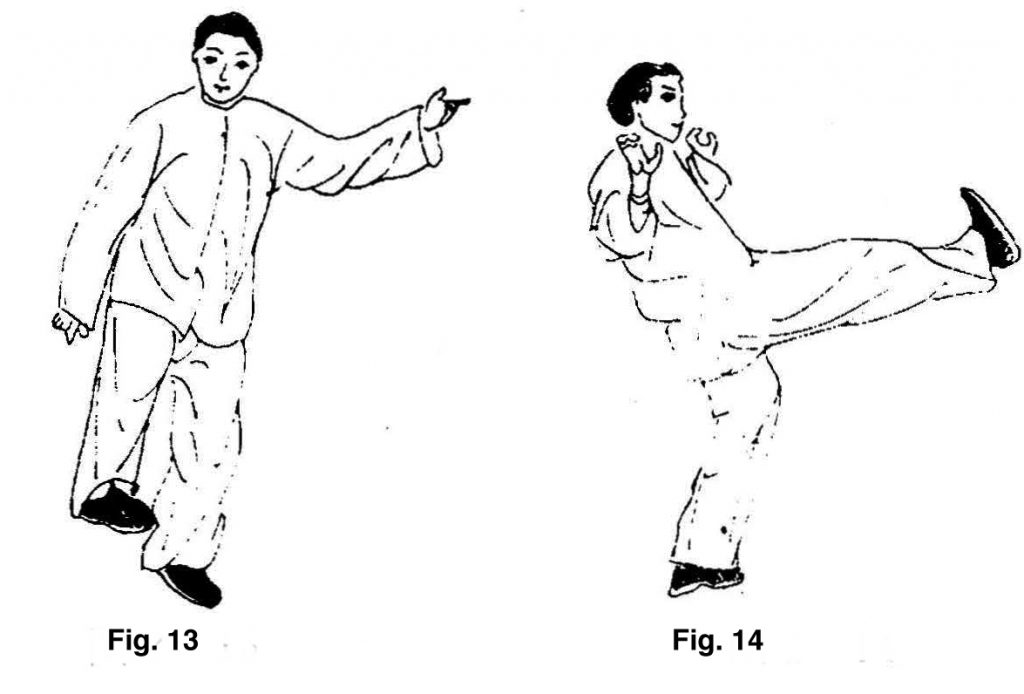 The legs bend and Squat, and the feet are separated by a distance that slightly wider than the shoulders. Assume a Zhan Zhuang posture. Relax the waist and sink the shoulder (Fig. 16). 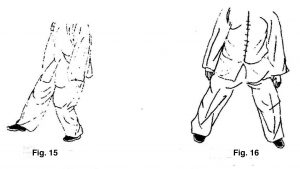 The right foot is horizontal and the left leg and knee open outward, with the left foot horizontal. The toe tips of the feet face in opposite directions forming a shape like the character “Gong” (工). The toes grasp the ground and the center of the sole of the foot is empty. The heels press down forcefully (Fig 18). 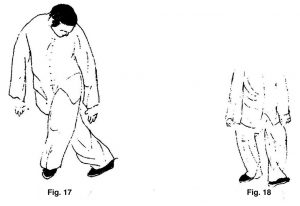 The right foot hooks inward in front of the toes of the left foot, appearing like the form of the character “ Ding” (丁). The toes grasp the ground and the center of the sole of the foot is empty. The heels press down forcefully (Fig 19).

The tips of the toes of the front foot touch the ground, and the rear foot is horizontal. Sink the shoulders. The rear foot is stable and steady (Fig. 20). 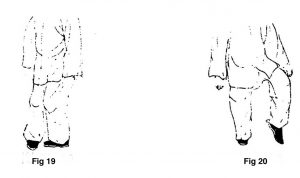 The Outside foot hooks and the inside foot goes straight,

Scraping[1] the ground, but not scraping the Ground,

With bent knees following the twisting Yao and feet,

Twist the step, close the knees and grip the ground firmly.

These words are simple and profound,

They clearly illustrate the requirements of Tang Ni Bu.