The Eight Daoist Immortals and The Eight Trigrams: Part 4

The Daoist Eight Immortals are engaging archetypal characters who embody the Eight Trigrams of the Yi Jing, and different aspects of human consciousness and personality. Their stories and their character traits illustrate much about Daoism and our own nature. This is the fourth and final installment of a series of four articles on the Eight Daoist Immortals.

The Daoist Eight Immortals and the Eight Trigrams: Part 1

According to Dr. Bao Lin Wu who teaches the martial art, The Eight Immortals’ Revolving Sword of Pure Yang: “over the centuries, each of the Eight Immortal was carefully classified, required to match a trigram relevant to his or her strengths, personality, skill, and psychological make-up. They each also used a particular form of Qi Gong and martial arts to acquire a particular essence that was, moreover, associated with the trigrams. Not only linked with one trigram, they incorporated the texture of the other trigrams, so that each of the eight could successfully, crossover, adapt and change positions with all others.” [1]

The most common way of connecting the Immortals and Trigrams employs the Post-Heaven (Hou Tian) configuration of the Trigrams. In this configuration, He Xian Gu represents yin-female and it therefore associated with Kun-Earth in the Southwest. Li Tie Guai, because of his hot, fiery temper is located in the South, while the leader of the group, the calmer, Zhang Guo Lai is in the North. Zhong Li Quan is in the East, where China meets the sea, with his sea stirring, weather controlling fan. Lu Dong Bin with his spells and demon slaying sword is in the West, traditionally the dwelling place of magical forces. Han Xiang Zi with his jade flute is in the Southeast, associated with the Wind Trigram and Lan Cai He defends the Northwest and Cao Guo Ji defends the Northeast. [2] 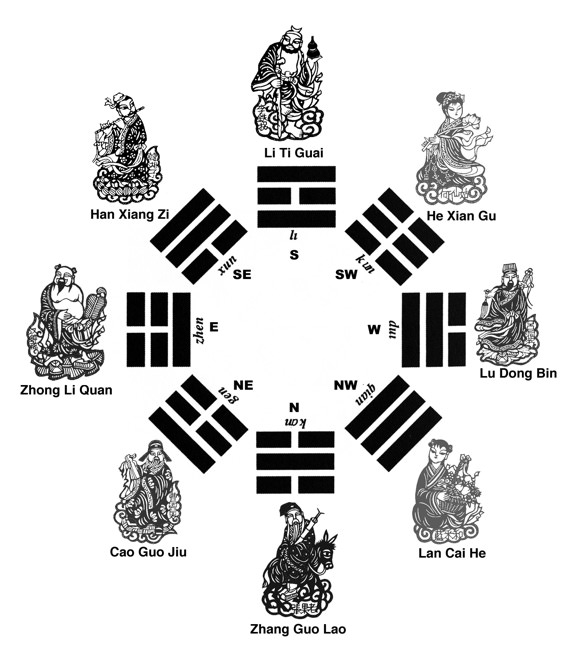 The Eight Immortals associated with their specific Trigrams and directions invoke a Daoist magic battle formation called the Ba Zhen Tu – Battle Chart of the Eight Trigrams. According to legend, the Eight Trigram Battle Formation was first created by the Yellow Emperor and was amended by many strategists until it was completed by the famous strategist Zhuge Liang during the Three Kingdoms Period (220 – 280). This secret formation combines a nine-square field system with the Eight Trigrams well as the knowledge of astronomy and geography. There is a stone embankment 1,500 meters (0.9 miles) long and 600 meters (0.4 miles) wide, located about 1 km (0.6 miles) east of Fengjie County, at the place where the Plum Stream merges with the Yangtze River. With rocks and stones piled randomly, the embankment was believed to be the Eight Trigram Battle Formation where Zhuge Liang drilled his troops.

Based on this arrangement, in Feng Shui, the Eight Immortals each guard one of the eight directions. Their presence in the home is thought to ensure good Feng Shui. The Eight Immortals are believed to bring longevity, good fortune, good descendents, wealth, good name and recognition. They also create compassion and generosity of spirit. Because they are transcendent, they represent things that are positive, pure and invigorating. A typical Feng Shui diagram with the Eight Immortals as protective deities is shown below: [3] 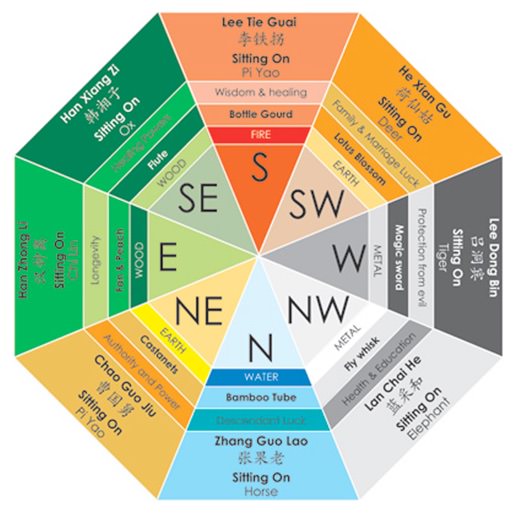 Writings attributed to Zhuang Zi (Chuang Tzu) tell us that True Men (Zhen Ren) had “unremembering hearts, calm faces, clear brows. They were cool like autumn, warm like spring; they were pleased and angry evenly through the four seasons, did what fitted in with other things, and no one knew their high point.” The True Man of Old:

His figure looms but suffers no landslides,

He seems to lack but takes no gifts.

Assured! His stability, but not rigid.

Pervasive! His tenuous influence, but it is not on display.

Lighthearted! Seems to be doing as he pleases.

Under compulsion! Inevitable that he does it.

Impetuously! Asserts a manner of his own.

Cautiously! Holds in the Power which is his own.

So tolerant! In his seeming worldliness.

So arrogant! In his refusal to be ruled.

Scatterbrained! Forgets every word that he says.[4]

The Zhen Ren, the genuinely human person, is in tune with the cycles of nature and is therefore not upset by the vicissitudes of life. In tune with nature, and with the cycles of yin yang, the True Person is not disturbed or harmed by them. This is sometimes expressed by hyperbole – the True Person cannot drown in the ocean nor be burned by fire. Zhuang Zi goes on to hint that there are ways of cultivating or genuine and natural humanity. Through these methods we:

learn how to nourish the ancestral root of life that is within us. We learn how to identify with that center which functions as an axis of stability around which the cycles of emotional turbulence flow. By maintaining ourselves as a shifting and responding center of gravity we are able to maintain an equanimity without giving up our feelings altogether. We enjoy riding the dragon without being thrown around by it. Ordinarily, we are buffeted around like flotsam in a storm, and yet, by holding fast to our ancestral nature, and by following the nature of the environment—by “matching nature with nature”—we free ourselves from the mercy of random circumstances. [5]

Psychologist Robert Santee describes lack of attunement with the natural rhythms of the world as a state of chronic stress:

When we interfere with the natural, cyclic process of change and transformation through our thoughts, desires, emotions, behaviors and lifestyle, we fragment mind, body and environment. We make our world complex, absolute and inflexible. We are out of balance. As a result, we aren’t centered, rooted, or flexible. We are chronically stressed. We aren’t in harmony with the Tao. [6]

In the Zhuangzi, Confucius describes the Zhen Ren as “those that roam beyond the guidelines”– the truly free, while he himself is “the sort that roams within the guidelines” – one of those condemned by the sentence of Heaven.”[7]

The Eight Immortals serve as emblematic examples of our own internal passage through life. These eight archetypal characters defy easy characterization, which is perhaps our fascination with them. They did not all begin life in similar circumstances They achieve their magnanimity and perspective as a side-effect of their immortality. Hence their commitment to Daoism is not doctrinal, but is based upon their internalization of the Dao and of Wu Wei (non-interference). This allows them to easily and carelessly respond to the challenges of the world.

The drunkenness of the Eight Immortals is akin to the perfect state of the perfected person. The drunken ecstasy of the wine cup and the free and easy wanderings of happy-go-lucky immortal drinking from his wine flask are metaphors for non-interference and harmonization with change and transformation. [8]

The shepherd Huang Chu Ping met a Daoist master and followed him to stone chamber on Mount Jinhua. Forty years later is elder brother who was looking for him found him there. At some point during their reunion his brother asked Chu Ping what had happened to the sheep he had been shepherding. Chu Ping told him they were on the east side of the mountain. When his brother looked there he saw only white rocks. He returned and told Chu Ping there were no sheep. Chu Ping insisted there were sheep, but his brother could not see them. They went together and Chu Ping shouted. “Sheep get up!” The rocks stood up and there were the sheep. At that point the brother realized that Chu Ping was a transcendent Immortal. He latter attained the Dao himself through Chu Ping. [9]

Daoist Priest Kristofer Schipper points out the story’s simple message: “anyone can become immortal. One only has to get rid of the trouble of keeping those sheep – these animals multiply perfectly on their own.”[10]

[9] To Live as Long as Heaven and Earth: Translation and Study of Ge Hong’s Traditions of Divine Transcendents by Robert Ford Campany, p. 496-7.