The Eight Daoist Immortals and The Eight Trigrams: Part 1

Immortals are often described as being able to fly to the stars and some ride dragons or cranes as they fly through the heavens. In Daoism, the red-crowned crane is a symbol of longevity and immortality. In art and literature, immortals are often depicted riding on cranes. A mortal who attains immortality is similarly carried off by a crane. Reflecting this association, red-crowned cranes are called Xian He (仙鶴), literally “fairy crane” or “crane of the immortals.”

The term Xian has many uses and can mean someone who is spiritually transcendent, or physically immortal. It can refer to a wizard, magician, shaman or alchemist, but also to a genie, fairy or nymph. The sage or recluse, living high up in the mountains, is a common theme in Chinese culture.

The Chinese character for Xian (Immortal) contains two elements: “person” 亻(人 ren) and “mountain” (山 Shan). An older variant is the character: 僊. Thus the character can mean a “person of the mountains” or a “human mountain,” referring both to the association of the Immortals with mountain recluse and to their place in Daoist thought as embodiments of nature and natural forces. Kristofer Schipper adds that phonologically, Xian is derived from the root meaning “to change”, “evolve”, and to “go up”, referring to transformation, evolution, or “ascension to heaven.”[2] Xian can therefore mean “perfected” or “transcendent.” Human beings of high attainment are often compared to floating clouds, “beautiful phenomena which are, but make no effort to be. The filmy lightness of an idling summer cloud is suggestive of the sensation of weightlessness that characterizes immortals, a sensation born of absolute freedom from care and anxiety.[3]

Daoist Scholar Livia Kohn adds that the Book of Songs (Shi Jing) uses phrases such as “to dance with flying sleeves,“ to describe immortals, while other texts refer to “living long and vanishing in flight.” She goes on to say that “the ‘man-and-mountain’ variant means ‘to reach old age and not die,’ while the ‘dance-with-flying-sleeves’ character signifies, ‘to move away and enter the mountains.’ The obvious implication off the term Xian is therefore twofold. It connotes, first, the idea of a takeoff, a separation form normal life, be it in an ecstatic dance or by going into the mountains; and second, the notion of longevity and the complete avoidance of death.”[4]

There is no one way to become an immortal. Immortals are born naturally, and achieve immortality through great effort. They represent a cross-section of the population, from rich to poor and old to the young, proving that anyone can become an immortal. In the Han dynasty, it was believed that immortal materials, if ingested, could transfer immortal status to a human being. Hence, there are stories of people ingesting exotic minerals or herbs to become immortal. In the Traditions of Divine Transcendents (Shen Xian Zhuan 神仙傳), Ge Hong (283-343 CE) recounted tales of early transcendent Immortals and their hagiographies – an account or informal biography of an individual transcendent’s life, deeds and achievements. As a result Ge Hong gathered together many methods and combinations of practices for attaining immortality. Ge Hong saw the profusion of these methods as an opportunity. “Each technique brings benefit; the adept’s task is to select the essentials from each and combine them into a many-faceted, carefully balanced program of self-cultivation, capped by the preparation of one of the greater elixirs.”[5]

As Daoist priest Kristofer Schipper points out, anyone can become an immortal, “on the sole condition of finding his or her mountain, quit the treadmill of progress towards death and discover the return towards life. It is not even necessary to act intentionally: luck and a certain predisposition may sometimes be the only needed conditions, but nothing is guaranteed. It is necessary, however, to at all times be open and prepared to recognize, at a given moment of one’s life, the mountain or the initiating Immortal, which some day is to be found on everyone’s path. It is in this readiness and openness that we find all possible latitude for individual free will and faith.”[6] Schipper goes on to say that the obstacles to this path lie within us.

The Eight Immortals are popular figures in Chinese legend and literature. These eight figures are found throughout Chinese-speaking cultural regions, as well as in Japan. Some were historical figures (Zhong Li Quan, Lu Dong Bin and Zhang Guo Lao), while others are of unknown origin. It is not known why the eight became grouped together from the end of the Tang dynasty (618–906 CE). In subsequent periods stories about the Eight Immortals continued to be told at all levels of society and were often dramatized in Chinese Opera. The Eight Immortals are sometimes depicted as drunk, carrying gourds, flasks or barrels of wine. There are Qi Gong sets attributed to the Eight Immortals as well Gong Fu styles such as the Eight Drunken Immortals or Eight Drunken Gods. The Taoist story about the Origin of Drunken Boxing is that The 8 Immortals became drunk and unruly at a party for the Earth Mother and had to be ejected. In the ensuing fight, they beat the guard with their drunken Gung Fu. Zhong Li Quan (the leader of the Eight Immortals) later appeared to a Daoist who was taught the method of Drunken Boxing. 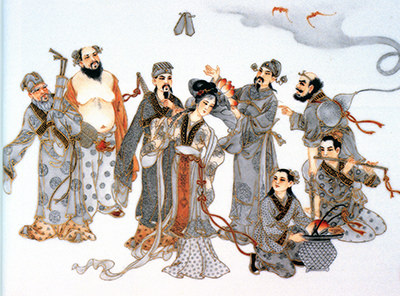 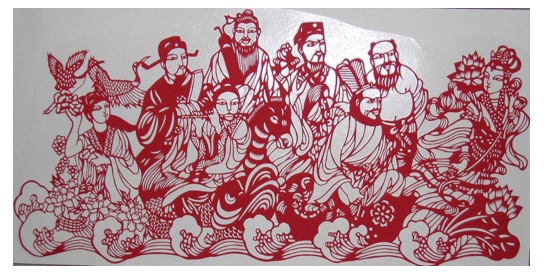 [5] To Live as Long as Heaven and Earth: Translation and Study of Ge Hong’s Traditions of Divine Transcendents by Robert Ford Campany, (Berkely: University of California Press 1959) p.81-82.