Dong Xiu Sheng was the teacher of Master Li Gui Chang. Dong is a unique figure in the internal arts who studied with many renowned masters of the internal styles, He also studied Southern Shaolin Five-Element Soft Style which permeates and blends with Xing Yi methods in Shanxi provence.

This article was translated by Huang Guo Qi. 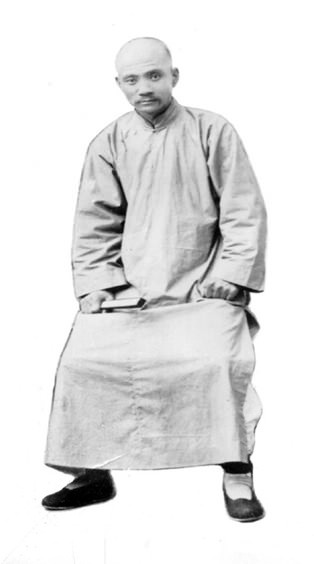 Dong Jun, also literally named Xiu Sheng, born in 1882, was a native of Dong village, in Taigu county, Shanxi province. His forefathers were assistant ministers. Chinese medicine was taught in his family. His father, Dong Fang Lun (?-1926), practiced medicine, and at the same time traded antiques. Dong Fang Lun also liked to train in the  martial arts and traveled to Beijing, Tianjin, Liaoning and other towns in order to practice medicine and engage in trade. Later he settled down in Beijing and was then nicknamed “Shanxi Dong.”

Master Dong Xiu Sheng was clever and smart. He learned poetry and literature from childhood. As a child, he, together with his brother Dong Jie (literally named Zi Ying), studied martial arts from his father. His father silently adored him, because of his nimble, vigorous and stable skill. At the age of twenty, he made progress both in the martial arts and in literary ability and began to travel with his father. After his father died, Dong Xiu Sheng traveled to Beijing, Tianjin and Liaoning with his school brother, Shi Rui Ting to practice medicine, and also to visit friends, train in martial arts and learn from various masters.

In 1918, Dong returned to his hometown and was invited to be a Chinese medical doctor at a hospital in Shanxi. Later he was invited by the Shanxi Mass Education School and Shanxi Martial Arts Promotion Association to work as a teacher of the martial arts. After Japan invaded China, because of the unstable political situation, loss of his work and livelihood and an addiction to opium, he died in poverty in 1939.

Master Dong studied various styles of the martial arts and was both thoroughly acquainted with martial theories and very skillful in martial techniques. In his childhood, he studied with his father and many other martial artists in his hometown, Taigu, where he learned the local traditional boxing skills, weapons and Xing Yi Quan. After he grew up, he traveled to learn with many masters in many places, developing subtle and profound skills so that increasingly his name became well-known.

In summer of 1925, Mr. Dong compiled a book, Shaolin Five-Element Soft Style Manuscript, saying in his foreword: “In 1901, while traveling to Yanjin (the old name for Beijing), I met with Mr. Li Zhi Ying and started to learn the five-element gentle arts. In investigating the origin [of Shaolin Five-Element Soft Style], it seems it was learned by a Shaolin Buddhist Master Miao Dan. He kept this art secret for three years and never taught it to anyone. Therefore, not many people learned it. In the study of the original theory of this art, it is the as same as explanations of yin and yang and the five elements. Although it is called “Shaolin Gentle Arts,” it starts and ends with qigong as its fundamental principle.”

Mr. Chang Zan Chun, a native of Yuci county and a famous calligrapher of our province, and Mr. Li Jin Wen (literally named Li Xun, 1891-1959), disciple of Mr. Dong, also wrote a foreword to this book. Li’s foreword states: “In the reign of Emperor Qian Long of the Qing Dynasty, when the Shaolin temple in Fujian was destroyed, Buddhist Master Miao Dan collected alms everywhere in a hope to restore the temple to its original status. He traveled into Tongzhou, a county where there are many martial artists. Mr. Li En Yuan, who was especially fond of attacking and defending techniques (ie: martial arts), figured out that Master Maio Dan had a magic art and invited him to stay at home in order to learn the art. After studying for several years, he learned all the marvelous skills. The master knew had obtained them and went away. But, the Shaolin temple was not restored and afterward Master Miao Dan could not be found.”

The master [Li En Yuan], passed down the art to his third generation, his grandson, Mr. Li Zhi Ying, literally named Li Jie Chen, and nicknamed Jia Jia Li. He opened an escort (bodyguard) agency and was well-known inside and outside the Sanhaiguan region. Mr. Li Jie Chen passed down this art to Monk Li Yuan, Liu Song Qiao and Wang San from Tong county, and Mr. Dong Jun (Dong Xiu Sheng) from Taigu county. Master Dong Xiu Sheng, also studied Xing Yi Quan with Mr. Geng Ji Shan for over twenty years and profoundly understood the mysteries of the boxing art. Master Dong was also skillful in medicine and worked in  a hospital in Shanxi.

In the basic skills of Shaolin Five-Element Soft Style there are:

Seventy two techniques for separating the tendons and dislocating bones.

In training, Buddhism and boxing skill are merged into one entity and the interior and exterior are cultivated simultaneously in a specific manner.

In learning and studying Xing Yi Quan, Master Dong established his own style by researching boxing theories and methods and absorbing the advantages of various schools. After leaving Shanxi, he first studied with Geng Ji Shang (literally named Cheng Xin), a disciple of Liu Qi Lan. He then went to the “China Martial Artists Association” of Tianjin in 1914 and studied with Li Cun Yi, the dean of the association. In that period of time, he went back and forth between Beijing, Tianjin and Cangzhou of Shen county and of course learnt from a number of seniors masters: Mr. Liu Qi Lan, Mr. Zhang Zhan Kui, and Mr. Qian Yan Tang, etc. In discussions with Mr. Jiang Rong Jiao, he was particularly appreciated by Mr. Jiang Rong Jiao.

Later, Mr. Liu Wen Hua (literally named Dian Chen), the second son of Mr. Liu Qi Lan, was invited by the Taiyuan National Normal School to teach, following Mr. Li Bin Tang (son of Li Cun Yi) and Mr. Wang Jun Chen (who defeated a Russian boxer in Beijing). Profound and skillful in the art through family instruction, Liu Wen Hua served as instructor of Chinese martial arts for Tsinghua University, and head coach for “China Martial Artists Association” of Tianjin and “Martial Arts Association” of Beijing. In their meetings, Mr. Dong humbly, in the manner of a disciple, asked him for advice and thereby made his arts even more skillful. It is clear that Mr. Dong was especially fond of the martial arts, modestly learnt from various schools and strictly avoided acting with a one-track mind. He compiled Detained Explanation of Five Elements and Twelve Forms of Yue Style Xing Yi Quan.

Dong Xiu Sheng as a Teacher

Master Dong’s skill was correct and true in the postures, complete in the techniques, strict and rigorous in energy and strength (Jin-Li), efficient in body experience and application and especially proficient in attacking techniques. Master Li Gui Chang often said that “five gong” of Mr. Dong were trained without interruption daily, meticulously and were marvelous and incomparable. His technique in testing the hand and attacking the opponent was extraordinarily mysterious, done by method rather  than strength. His most handy techniques were “snake entangling the hand”, “iron broom, pasting the latch”, “blocking upward and hanging downward”, moving the two hands in chains, intending the sticking and wrapping techniques with the elbow and knee, and looking for the energy marvelously upward, downward, leftward and rightward. When the master was over sixty, and tested hands with young and strong adults, it was like playing with a roly-poly daruma doll causing [the students] to exclaim with admiration.

His disciple, Li Li Xun (Jin Wen), originally a formally-accepted disciple of Master Qi Zi Xian (literally named Zhen Lin, studied with Master Wang Fu Yuan), studied Xing Yi Quan for years and was especially skillful in the use of the giant pole, so that he was nicknamed “Giant Pole Li”. In 1923, when Li met with Master Dong for the first time, he was unconvinced by Master Dong’s skills. At that time Master Dong was almost fifty, and in seeing him smart in mind and solid in the foundation, Li tried to make Mr. Dong his disciple by testing with him. His wife was sitting at the edge of the brick bed, wadding cotton and sewing a quilt. Dong uplifted him with a “soft Pi Quan” over his wife’s head, falling down to the brick bed. He was still not convinced, and was thrown again two more times. The basin and tea things were all smashed. Afterwards, Li was completely convinced and was accepted to study the skill, and made great progress in the techniques.

Master Dong engaged in medical services as his public affairs and also engaged in the martial arts and writing. He had lots of martial arts students, but only a few were formally-accepted disciples. After Mr. Li Jin Wen was accepted as a disciple by formal ceremony in 1924. Mr. Zhang An Tai (disciple of Mr. Mu Xiuyi), introduced Li Gui Chang, Liu Yi, Shen,  Bing Lian, Miao Yu Lin and Wang Nai Yi, to be formally accepted as disciples.

Five Elements refers to metal, wood, water, fire and earth, connecting to the lung, liver, kidney, heart and spleen, skin, tendon, bone, blood and flesh in the human body. Gentle Arts refers to methods of nourishing qi and training qi. The goal of nourishing qi is to return to the Dao. The respiration is the platform for training qi. Therefore, it is termed Five-Element Gentle Art. Because this art originated in the Shaolin temple in Jujian province, it is termed South Shaolin Five-Element Soft Style.

When Taiji moves, it produces yang, and when Taiji is tranquil, it produces yin. The motion brings about division. The tranquility leads to combination. The internal and external real qi of the human body is then in conformity with the natural reason of yin and yang. Qigong is regarded as an ultimate goal in Shaolin Soft Style. There are two implications in the theory of qigong: to nourish qi, and to train qi. Qi does not move, after qi is nourished. If qi does not move, the spirit will be clear. When the spirit is clear, it is appropriate to advance and retreat. The applications of the gentle art can be used to conquer the enemy. So, qi must be nourished immediately. Therefore, the way to nourish qi is really critical and important. To train qi and to nourish qi come from the same resource of qi, but are between void (emptiness; non-existence) and reality, between motion and tranquility, and between visible form and invisible form.

Use half a kilo of good linen and proper amount of soda-added flour and put them in a pot and cook the linen well, and take off its hard peel after it cools. Then twist it into a rope in length of about 33 cm, big in the top and small in the tail like a pigtail. In training various types of standing postures, pull the rope with the two hands in alternation, for training the finger force and wrist joint.

Put a piece of elm board 150 or 180 cm in length, 15 or 18 cm in width and about 1.5 cm in thickness against the wall, vibrate the wood board with the palm, for training the shaking power. After training a long time, a thicker wood board can be used.

Put a wooden ball in diameter of 33 cm on the table, press the wooden ball with the palm and roll the ball freely. Do not let it slip out of the hand. Then, hold the ball against the wall and roll it with the arm, in order to train sticking power.