In this article we will address two common questions that have come up recently since we launched our online programs on Daoist health and meditation.

What is the difference between Dao Yin, Daoist Yoga and Daoist Meditation?

Chinese healing exercises are traditionally called Dao Yin. Dao Yin exercises were created in antiquity, part of the early Yang Sheng (“Nourishing Life” 养生) tradition developed by hermits and sages who practiced self-cultivation in the forests and mountains of ancient China. Some of these exercises mimicked animals, while others involved regulated breathing combined with body movements that stretched and opened joints and meridians in order to direct and balance the flow of internal energy (Qi).

What we today call Qi Gong, Nei Gong or Daoist Yoga were once collectively referred to as Dao Yin. Dao Yin means “to Guide and Lead,” or “Guiding and Pulling.” Early Han Dynasty medical texts (circa 160 BC) like the Yin Shu (Pulling Book), and the Dao Yin Tu (Guiding-Pulling Chart), detail exercises that advocate pulling on (stretching or extending) the sinews or areas of pain.

Yin (引): to draw, pull, or stretch – as in drawing a bow to shoot an arrow. The ideogram references a bow on the left, and the single line on the right, a bowstring.

“Dao” refers to guiding the Qi in a physical and concrete way. “Yin” refers to pulling and stretching to release a blockage, or to literally “pull out” and thereby dispel a pathogen or an ailment. Yin also includes the idea of drawing or directing Qi to certain areas of the body. Yin can also refer to stretching, or limbering up muscles, joints and meridians. In this sense stretching a “meridian” or Qi pathway also means to stimulate or activate this pathway. Dao Yin movements are usually combined with Breath Regulation (Tu Na) exercises. One of the keys to good health is prevent stagnation of Qi and breath (vapor), lest they become stale and putrefy, as the following passage illustrates:

When the vapor and Qi clog, or block, specific ailments can result. Regulated breathing exercises are one method of discharging the stale Qi, vapor and breath (pathogenic Qi), while inhaling fresh, energized Qi, vapor and breath. Techniques of regulating respiration are sometimes referred to as Tu Na (吐纳) – literally to “spit out” or “disgorge” (Tu), and to “receive” or “accept.” (Na). When performing Tu Na breath cultivation practices, one is literally spitting out the old and stale, and taking in the new and fresh. In this way Qi and vapor are renewed and revitalized and the Qi circulates smoothly.

Nourishing Life traditions frequently employed a wide scope of interconnected self-cultivation practices that have variously been called Daoist Yoga, Dao Yin, and  Daoist Meditation. Therefore there is considerable reason for these three different terms, and the difficulty in precisely defining them.

Meditation techniques are often a part of Dao Yin and Daoist Yoga sequences, and Dao Yin and Daoist Yoga exercises are often used as a precursor to meditation, because the exercises align the body, concentrate the mind, open the energy pathways, and circulate the internal energy. The interconnection and interpenetration of Daoist Yoga, Dao Yin or Daoist Meditation makes them almost inseparable partners in Nourishing Life and promoting longevity.

Over the course of Chinese history, and particularly in the modern era, Dao Yin, Daoist Yoga and Daoist Meditation methods were combined and became known as Qi Gong. Many of the original sequences were altered and reformatted into “modern” sequences that were potentially more appealing to modern tastes. However, the older methods are still taught, and they are also found within the modern teachings. Although in some ways Daoist Yoga, Dao Yin, and Daoist Meditation are inseparable, for both learning and practice purposes the three methods are often separated into distinct entities by the following characteristics:

Daoist Yoga: methods that we would describe as stretches and physical movement. Daoist Yoga exercises generally involve holding postures while extending and ‘pulling’ on the meridians and the fascial network, or moving through a series of postures. In this way there is some resemblance to Hindu Yoga techniques. Daoist Yoga includes breath regulation and meditative practices.

Dao Yin: methods in which Qi is guided and led through meridians and points by means of light massage and pressure on acupuncture points. Like Daoist Yoga, Dao Yin methods often include breath regulation and meditative practices.

Daoist Meditation: refers to meditative practices that change one’s internal nature. Today these kinds of practices are sometimes referred to as Quiescent Qi Gong, but they are also considered to be internal alchemy practices in Daoism that transform the mind and body through stillness. Daoist Meditation often incorporates some Dao Yin, guiding and leading techniques in conjunction with quiescent sitting, lying, and standing meditation.

The interplay and organic wholeness of these three complimentary practices is illustrated in the diagram below: 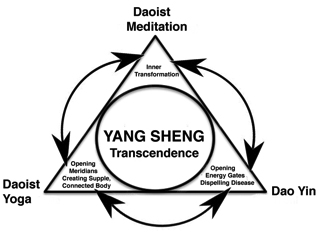 The division of Yang Sheng Methods into these three categories is somewhat general, somewhat artificial and by no means written in stone. Some Dao Yin methods contain yoga-like stretching movements, and Daoist Yoga sequences often have components that rub and massage meridians or acupuncture points.

The main reason for using the three categories, or labels, is to make it easier to learn, practice and teach these methods in a cohesive manner.

A second common question in relation to Dao Yin, Daoist Meditation and Daoist Yoga is:

Is there a suggested sequence to do all three?
Should they be done every day, back to back, or another way?

There is no real practice order as Dao Yin, Daoist Yoga and Daoist Meditation all have overlapping, interlocking components – hence the idea of a triangle rather than a line.

I generally advise doing some kind of Dao Yin early in the morning upon arising, and then doing one of the Daoist Yoga routines later in the day. The Daoist Yoga routines already contain meditation components, so it is fairly easy to use those as springboard for meditation. Some meditation can also be done before going to bed at night. Many Internal Alchemy practices advocate meditating from 11 pm to 1 am, when Yang Qi is beginning to stir.

Of course most people only have so much time during the day, so sometimes it is necessary to choose one practice over another. Here are a few suggestions:

One could practice Daoist Yoga for several months as preparatory training for engaging in longer periods of seated meditation. Daoist Yoga opens up the energy pathways so that meditation practice will be easier and more efficacious.

Or one could begin with Comprehensive Daily Dao Yin in the morning, followed by Morning Daoist Yoga practice. As each Daoist Yoga routine includes Daoist Meditation, this can be a good segue into longer periods of meditation, or connecting Daoist Yoga to other Meditation methods.

Another good way to integrate is to practice comprehensive Daily Dao Yin, and finish with 10-20 minutes of seated meditation. This is a great way to start the day.