The mandarin Duck Knives (or Deer Horn Knives) are “short range bladed weapons with long power” that are perfectly matched for the techniques and palm changes in Ba Gua Zhang.

The Mandarin duck knife form that Tom teaches in the NYIA/IAI organization was taught to him by Ba Gua Master Gao Ji Wu.

The knives were popularized in mainstream culture in the year 2000 with the martial arts fantasy movie: “Crouching Tiger, Hidden Dragon” by Ang Lee.

The techniques of Ba Gua Zhang have their foundation in “Lohan Shaolin” for the Yin style of Ba Gua Zhang and in “Shuai Jiao (Chinese Wrestling)” in the Cheng style of Ba Gua Zhang. Daoist energetic concepts, practices, and circle walking principals were applied to the above foundation arts, and the result is what we call modern Ba Gua Zhang today. The combination of the three traditions above form a complete martial art and system that includes striking, kicking, joint locking, and throwing. The techniques are executed with the “whole body” and “through the back” (Tong Bei), using the body structure, mind intent, Qi, and spirit. There are hard, hard-soft, and soft techniques within the framework of this martial art. The use of the Mandarin duck knives is a bladed/spiked/covered extension of the hand and work efficiently within the moving framework of the Ba Gua Zhang art.

There are numerous names associated with the blades including:

The size of the crescent blade was described from tip to tip to be no larger than 12 inches and as small as the width of the size of the fist. 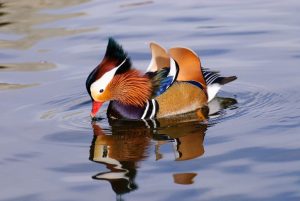 The shape of the crescent of the Mandarin duck knife may correspond to the shape of the head, back, and tail of an actual Mandarin duck. The male duck has two curved lower back feathers that imitate a set of crescent blades. Also, the male and female Mandarin ducks are known for always staying together as a pair and are very affectionate. This behavior of the ducks translates to the harmonious symbols of Male/Female, Sun/Moon (Qian/Kun), Noon/Midnight (Wu/Zi), or Yang/Yin. 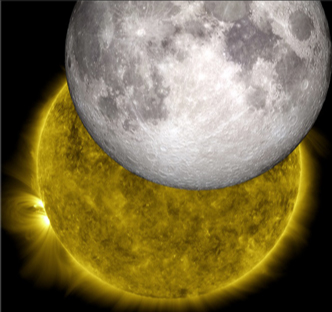 The crescent blade has characteristics of both convex and concave shapes. 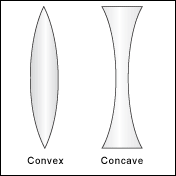 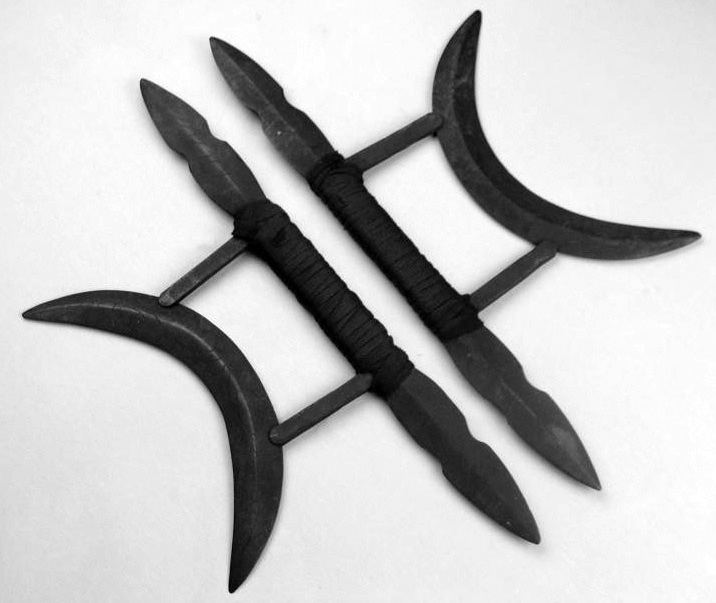 This Mandarin Duck Knife has a shaft that is spiked at both ends (front is longer than the bottom) with a concave crescent moon blade.

There are three intercepting areas where you can trap the opponent and/or their weapon including:

NOTE: The shape of the Gao Ji Wu version of the Mandarin duck knife is different than most of the other types of Mandarin Duck Knives/Axes or Deer Horn Knives because the crescent blade extended off the fists are concave instead of convex.

Other Versions of the Mandarin Duck knives or Deer Horn Knives 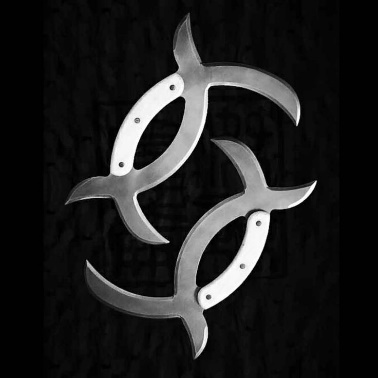 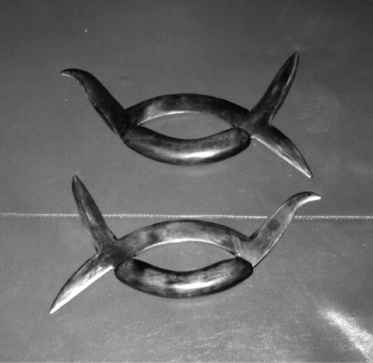 The Deer Hook Knives are in the shape of the sun and moon coming together. The intersecting area between the two spheres is called the “vesica piscis”. The 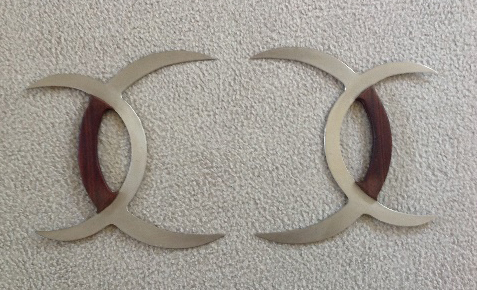 handle is the middle of the “vesica piscis” area.   The intersection area is a convex axe shape.   This feels like you have circular convex axes on your fists. This is a different feeling and interception shape than the concave crescent on the Gao Ji Wu style of the Mandarin duck knife.

Ba Gua Master Zhao Da Yuan also stated that the actual Horn of a Deer was used as a weapon to strike vital points on the body. The horn would be cut at the bottom where there is a mushroom shape. This rounded mushroom shape would be held in the palm of the hand. (See Tom’s article “An interview with Ba Gua Master Zhao Da Yuan – Part 2”). Perhaps the concept of adding a protective axe blade to the Deer Horn handle, prompted the naming of the deer horn knives? I hope someone more knowledgeable of the history of this weapon will correct my assumption and that we may all learn the correct origin. 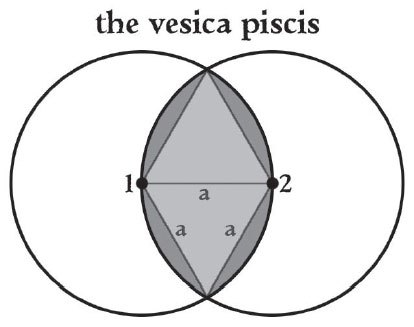 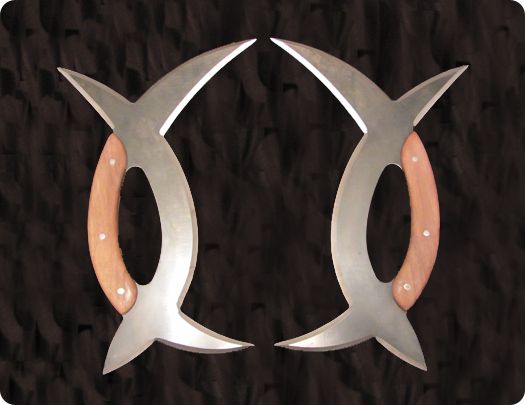 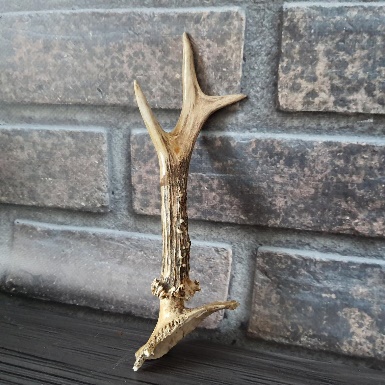 Song of the Mandarin Duck Knives

In the “Classical Baguazhang volume XII: Wudang Bagua Lianhuan Yue” by Huang Xin (translated by Joseph Crandall) there is a song dedicated to this weapon which states:

Although this weapon is short, its principals and methods are high,

If you realize thoroughly the dark power, you will be overwhelmingly happy.

Actions of the Mandarin Duck Knives

Actions associated with the Mandarin duck knives/axes include:

Legend of the Practical Use of the Knives

I remember stories told by my teachers in the YMAA organization relative to the bodyguards of the emperor and empress in Beijing China. They would employ a small crescent blade, the size of the width of the fist, and would be hidden and concealed within the long sleeves of their robes. It is not a wonder that the guarding event looked mystical, supernatural, or magical to the uninitiated. It must have been quite a shock for the enemy to attack, and then the guard intercepting long range, then quickly moving to short range, covering the enemy’s weapon, and then proceeded to slice off fingers, slash, hack, stab, and drop them to the floor.

As I write this, I can only smile and laugh as I ponder how efficient and vehemently violent this lethal short-range weapon with long power can be when applied within the Ba Gua Zhang framework.

In Tom’s teaching, we begin with training the 8 basic movements.

These movements are then extended by use of the mud-stepping and walking.

The 8 basic movements are described in the actions of the following Chinese words:

The two key movements for the form of the Mandarin duck knives taught by Tom are:

We then practice each of the eight changes of the form with particular attention paid to where you are relative the eight directions (Gua: Trigrams) on the circle.

Just like the Ba Gua Zhang palm techniques, you move your torso around the knives and your arms do not independently move the knives. The movement in the torso is facilitated by the horizontal movement of the Yao, and the closing/opening of the body Kuas through the mud stepping (Kou-Bu, Bai-Bu stepping).

The form is showing you how to deal with multiple opponents from any one of the eight directions. Each movement of each set in the form can be practiced left and right, repeated several times on a line, figure eight, or as a change to any angle on the circle during circle walking. The form also includes the feeling of different animals.

Each movement of the form seamlessly rebounds into the other like a string of pearls, surfing an infinite wave, or interlinking rings. Do not lose site of this end-result. At first, you practice, and the feeling is very robotic and with emphasis on individual movements in a staccato fashion. With time and concentrated practice, the movements will start to blend into each other as a continuous whole. Practice with this end-result in mind.

The way you hold the blades (45-degree angle) either low (Downward Sinking Posture) or high (Pushing Millstone Posture) makes sure that when you connect with another weapon (Jian: Straight sword) and covering, you are always cutting the angle and wedging it off the body.

This angle ensures that the opponent’s blade is caught and stuck in your Mandarin Duck Knife if they try to remove it or is deflected (wedged off the line of attack) if they try to poke on a line into your body.

If you hold the knives vertical, the opponent’s weapon can easily find a line of attack into your body.

Hence, it is important to understand holding the blades at an angle to always be ready to intercept and cover. This also ensures that you are constantly creating a threat with both the lead and behind blades.

When Piercing with the leading arm, the translation of the long power is spiraling from the use of the mud step, the turning of the Yao (lower back and Mingmen), and continue vertically through the back (spine), spiraling through the arm, and extending to the top spike of the knife. This also produces a flicking of the top of the crescent blade that moves in an arc horizontally across the opponent’s neck or eyes/bridge.

The Piercing movement can be completed like the traditional boxing moves as long as you are using the mud stepping.

Example of practice with Chuan (Jab with front hand) using mud stepping while walking on the line forward and backward:

If you have had the luxury of working with both of the different types of knives, you will understand there are some techniques that you can do with one but not really with the other and vise-versa. I would recommend that you practice with both and strive to learn what works well with one vs the other type.

I will continue these streams of thought with a series of articles covering each of the remaining 7 Basic movements. I truly hope you also become “overwhelmingly happy” with the practice and experience of this unique weapon.