Wang Shi Tong (王世通) was born in Xiao Tong Village, in Hebei Province, China. Many types of martial arts were taught taught in his village. Wang studied Chang Quan (Long Fist) when he was seven years old, and later studied Xing Yi Quan. As an adult, he moved to Beijing, where he worked in a factory. After suffering an illness, a friend convinced Wang to study Tai Ji Quan in order to improve his health. From 1950 to 1960 Wang Shi Tong studied Tai Ji Quan and practiced every day in the Temple of Heaven Park. While practicing in the park at Temple of Heaven, Wang was noticed by Guo Gu Min (郭古民) one of the most famous teachers of Ba Gua Zhang in Beijing.

Guo Gu Min was a disciple of Liang Zhen Pu (one of the last disciples of Dong Hai Chuan, the founder of Ba Gua), as well as a student of Liu De Kuan (also a disciple of Dong). Liu De Kuan was the creator of the 64 linear palms that are taught in Liang style. Guo was also the senior school brother of Li Zi Ming.

Guo Gu Min was impressed with Wang Shi Tong’s dedication and strength. Wong was the arm wrestling champion of his factory. Wang ultimately became a disciple of Guo Gu Min and studied with him for the next six years. Wang practiced everyday at 5 am and then walked to work in the Heaven Uplifting Posture, hanging his coat on one hand and his bag on the other.

In the 1960s, conditions in China were extremely difficult. Millions of people were near starvation, including Guo Gu Min, who was not married and only practiced martial arts. Guo had no money and was supported only by his disciples during these years. Through Guo Gu Min, Wang Shi Tong met Cheng Ting Hua. Wang was able to study Lian Huan Ba Gua Zhang (Eight Diagram Palm Chain Linking form) with Cheng Yu Xin (the son of Cheng Ting Hua). Cheng Yu Xin was also very poor and taught martial arts from a street stand in order to make money. Wang was grateful to Cheng for his teaching.

Guo Gu Min died during the Cultural Revolution. At this time, it was very difficult to practice traditional martial arts. The Cultural Revolution tried to do away with all things from the past so that Chinese society could move quickly into the twentieth century. The government supported Wu Shu and suppressed the traditional family arts and their emphasis on self-defense. Many traditional masters and their disciples suffered greatly because of this policy. Li Zi Ming held an important office with the communist party and was asked to coach Wu Shu, so he was allowed to practice openly. In order to practice without being persecuted, Wang Shi Tong became a disciple of Li Zi Ming. Wang always preserved the teachings as he received them from Guo Gu Min.

Eventually, Wong Shi Tong withdrew from martial circles, partially because of the increasing emphasis on the performance aspect of martial arts. He had suffered an industrial accident at the factory where he worked and used that as an excuse. I met Wang Shi Tong in 1993, while he was watching some of us train with Xing Yi Master Liang Ke Quan in the park next to Hou Hai Lake. Liang Ke Quan pointed to an older gentleman with a cane sitting on a bench watching us, and said: “He is very good at Ba Gua. He is a school brother of Li Zi Ming.”

The following year Vince Black and I sought Wang out and we asked if he would teach us. He agreed, and we began learning Ba Mien Zhang (Eight Direction Palms or Eight Facing Palms) the very next day.

In his later years, Wang Shi Tong devoted himself to practicing Liang Zhen Pu Ba Gua, particularly the Eight Linear Single Movements (Ba Zhang), Lao Ba Zhang (Old Eight Palms), Liu Shi Si Zhi Tang (64 Hands Straight Line Forms) and Ba Mien Zhang (Eight Direction Palms). Wang felt that these forms contained only practical movements, every movement having specific applications. Wang told me that Liang Zhen Pu’s Ba Gua was extremely practical, without the flowery movements that characterized other styles. Although Wang showed me a notebook in which he had carefully hand-drawn all of the postures from Lian Huan Ba Gua Zhang, which he learned from Cheng Yu Xin, he said he felt the form was overly flowery. Wang said that Guo Gu Min’s teachings focused on practicality and application. Wang then proceeded to demonstrate simple, direct applications for each of the 64 movements in Ba Mien Zhang.

Even Wang’s weapons forms were practical rather than flashy. He had me demonstrate a Ba Gua broadsword form I had learned previously. His comment: “not bad, but too fancy.” Then he unveiled his sword work as he had learned it from Guo. Wang’s 64 Broadsword form contained only movements that were direct and to the point. In many ways it reminded me of principles of application, distance and timing that I had learned in the Filipino Martial Arts. Wang Shi Tong was one of the last of a generation of martial artists that looked at the arts as real and practical instead of entertainment. He had no interest in changing to fit the times.

Below are two photos of Master Wang instructing Tom Bisio in the subtleties of the 64 Ba Gua Saber in 1995. 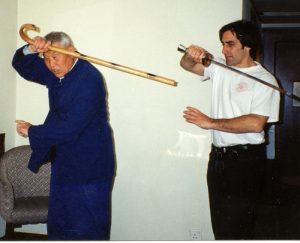 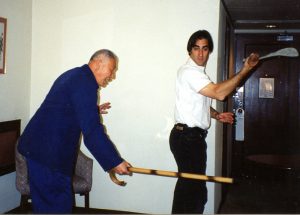 Wang Shi Tong taught only a few disciples during his lifetime. When people would ask him to teach he would sometimes pretend he had forgotten everything. When I met him in 1994, he had difficulty walking due to a head injury, but his enthusiasm for Ba Gua remained undiminished. Even in his old age, Wang could still demonstrate the practical applications of each movement and his power and body connection were evident as he threw me around our small hotel room. Demonstrating fine points of attack and defense, the efficiency of the movements and their deceptive angles, appearing to attack one place while striking another (“Attacking the East to Attack the West”), never ceased to bring a big smile to his face.

Wang Shi Tong stresses the importance of Lao Ba Zhang (Old Eight Palms). Wang’s version of Lao Ba Zhang differs slightly from expressions of the form taught by other Liang Style practitioners, but at the same time Wang’s version maintains the basic structure and principles of these other expressions. In particular, his Body Turning Palm or Hidden Hand Palm (3rd Palm) is simple and to the point, while his Opportunity Seizing Palm (5th palm) contains many subtle dynamic rotating and body shaking actions as it deftly mixes high and low attacks.

Wang also stressed the importance of the Eight Single Movements, each of which relates directly to one of the palms in Lao Ba Zhang. The Eight Single Movements are invaluable, as they train many direct and practical applications that are hidden within the circular changes of Lao Ba Zhang. In time one finds the circling, rotating body actions within the seemingly linear movements and the direct penetrating attacks concealed within Lao Ba Zhang’s circular changes.

Wang emphasized the close relationship between the 64 Hands Straight Line Forms (Liu Shi Si Zhi Tang) and Lao Ba Zhang. He explained and demonstrated the relationship of each line of eight forms to one of the palm changes in Lao Ba Zhang, while discoursing on changes and variations. Wang’s teaching made it clear that without the fundamental body dynamics (Shen Fa) learned in Lao Ba Zhang, the 64 Hands Straight Line Forms are difficult or even impossible to apply. Wang also made it clear that with those Lao Ba Zhang body dynamics, limitless change and adaptation is possible.

I think Wang Shi Tong’s favorite form was Ba Mian Zhang, the “Eight Direction Palm” or “Eight Facings Palm.” This form contains 64 movements divided into eight sections. Each sections begins with one of the Ding Shi fixed palms and every move in that section is in some way a reflection of the Ding Shi Palm that starts the section. Each of the eight movements within a single section is performed to a different direction so that within each section all eight directions are covered. This means the practitioner is essentially weaving their way through the Nine Palaces as though fighting eight opponents.

Wang clearly broke down the specific footwork and applications for each movement of Ba Mian Zhang. For the most part his applications were direct and to the point, often taking an outside angle in order to avoid directly confronting the opponent’s force. This is extremely practical if one is dealing with multiple attackers. Many the movements in Ba Mian Zhang appear to attack high but actually attack low, and many turn an obvious strike into a hidden strike. When teaching me, Wang never seemed to tire of demonstrating these applications, and when I did them with proper spirit and Shen Fa, his eyes would light up.

In August 2018, Valerie Ghent and I went to visit Wang Shi Tong’s family in Beijing. We were graciously welcomed by Wang’s son, who went out of his way to give us some photos of Wang, including the portrait at the top of this article. We had a chance to look at some of Wang Shi Tong’s personal weapons. Below is a photo of Valerie weilding Wang’s very formidable looking straight sword.

I consider Wang one of my greatest teachers of Ba Gua Zhang. Wang passed away in 2005 after a long and incapacitating illness. We owe him much for what he passed on to us.