This is Part Two of a 2-part article. Read Part One here.

The name of this point, yongquan, conjures up the image of a spring where water is gushing out of the earth. Qi gushes forth from this spot to move upward through the body. In the internal arts, Qi and Breath emanating from the Earth come through this point and move up to connect with the kidneys and Mingmen. This is the water of the Earth connecting to Mingmen fire. Their combination creates balance and strength. Proper posture and alignment enhance this connection. Awareness of Yongquan is critical to remaining stable and rooted and to generating power that comes from the ground up. In Zhan Zhuang, San Ti Shi, Qi Gong exercises and Circle Walking Nei Gong, practitioners sense the connection between Yongquan, Mingmen and Baihui. 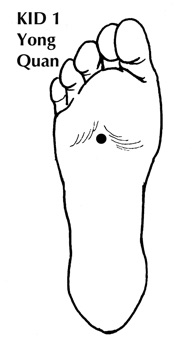 Laogong, in the center of the palm, must be open and hollow for Qi to spread into the hand and fingers. This point also has a direct connection with Yongquan. In Nei Gong, any change at Yongquan – for example from a weight shift – has an immediate and direct reflection at Laogong. These four points on the hands and feet (Laogong and Yongquan) must connect to Dantian for the body and the Qi to be integrated. This is called “Combining the Three Hearts.” 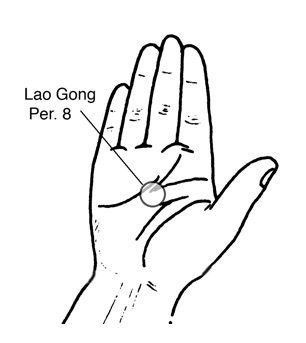 In the internal arts, Hegu is commonly called Hukou (“Tiger’s Mouth”). This is because when the fingers are spread, the space between thumb and forefinger resembles the mouth of a tiger. In internal arts and Nei Gong, this area must be open and round for Qi and Breath to fill the hands. The “Tiger’s Mouth” can also seize and attack. LI 4 is a famous point for headaches and in fact can be used for many problems of the head and face. It is effective with both acupuncture and acu-pressure. In Qinna techniques, one sometimes seizes this point to weaken the opponent’s hand. This point should not be needled or pressed hard during pregnancy, because it moves Qi very strongly in the whole body. 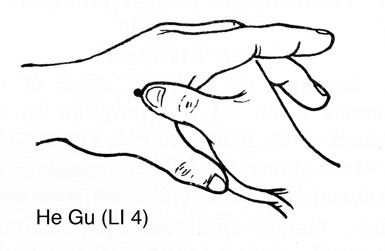 Located in the forearm above the wrist crease, Waiguan is where the San Jiao (Triple Burner) Channel connects to the Pericardium Channel through Neiguan (P 6). Waiguan lies directly opposite Neiguan. Waiguan  is a “gate point” which, when open, allows Qi to flow smoothly into the hand and fingers. In the internal martial arts and Nei Gong exercises, SJ 5 is kept open during the postures and movements. Waiguan is also a confluent, opening point for the Yang Linking Vessel (Yang Wei Mai), an Extraordinary meridian that links the yang Channels of the body, hence it is an important point in Macro-Cosmic Orbit Circulation. Lastly, SJ 5 is a point that is often attacked in Qinna techniques, like Golden Thread Wraps the Wrist. 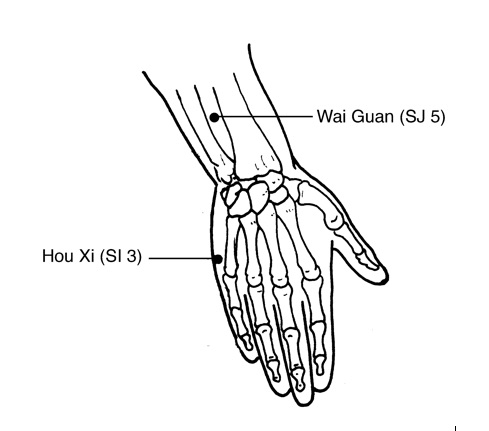 Nei Guan is a corollary to the SJ 5 point, in that it connects the Pericardium channel with the San Jiao Channel via SJ 5. Neiguan lies directly opposite SJ 5 and like SJ 5 is a gate point for Qi to flow smoothly into the hand and fingers. In the internal arts and Nei Gong exercises, P 6 is kept open during the postures and movements. Neiguan is also a confluent, opening point for the Yin Linking Vessel (Yin Wei Mai), an Extraordinary meridian that links the yin Channels of the body, hence it is an important point in Macro-Cosmic Orbit Circulation. P 6 is a vital point that can be struck to weaken the arm and the pericardium channel. It can be struck by blocking, hit by direct strikes or seized in Qin Na techniques. Neiguan is also an important acupuncture point for relieving nausea and motion sickness. It can be needled or pressed for this purpose.

Jianjing is an important point that regulates the flow of Qi downward, both into the torso and into the shoulder and arm. The San Jiao, Stomach, Gallbladder and Yang Linking Vessel all meet at Jianjing. The Neigong Classic states that in order to refine the steps, “one must gather Jin, from GB 21 and make it sink down to Kid 1 (Yongquan).” [3] Sinking GB 21 to Kid 1 stabilizes the body and allows the shoulders to naturally relax, so that power can be transmitted out of the arm, while simultaneously connecting that power to the legs. GB 21 and LI 11 and LI 10 are acu-points that must be open and relaxed in order for whole body power to be transmitted to the hands. Sinking GB 21 to Kid 1 also lowers the blood pressure and makes Qi descend. For this reason, it is contraindicated to needle or press the point with force during pregnancy. Disrupting Jianjing can break the opponents balance. Jianjing can also be struck in order to weaken and damage the arm and neck. When struck downward it weakens the legs. 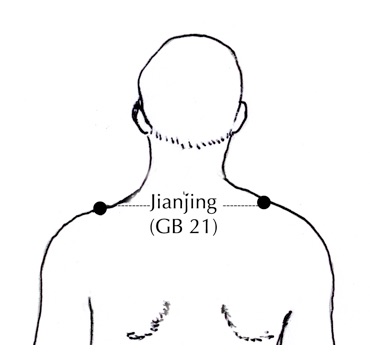 Zhangmen is an important point on the Belt Channel (Dai Mai). It is also a meeting point for the Zang Organs: Kidneys, Liver, Spleen, Lungs and Heart. This point is located at the tip of the 11th rib. One means of locating it is to bend your arm at the elbow. The tip of the elbow is generally on the point. This point acts as a “screen” that protects the internal organs. Attacks that penetrate into this point can cause internal organ damage. Therefore, Zhangmen is a vital point that many techniques in the internal forms are targeting. The elbows must sink and wrap inward in the internal arts, because it is crucial that this area be protected. Anatomically, the Liver and Gallbladder are behind the right Zhangmen, and the Spleen lies underneath the left Zhangmen. It is particularly dangerous to be hit in the Spleen, as it is a soft organ filled with blood that can easily rupture. Qi gong exercises that benefit the Liver often have movements in which the elbows brush LV 13 as the arms move forward and back. This stimulates the LV 13 acu-point and benefits the Liver and Spleen Qi. 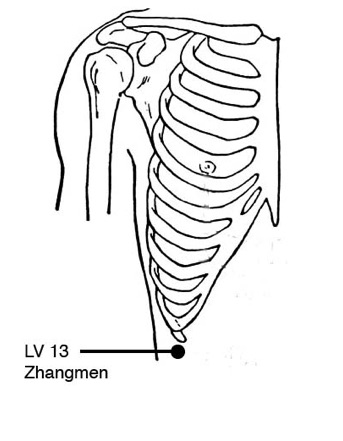 One of the most well known and most commonly used acupuncture points, Zusanli, ST 36, energizes the leg. It is called “Leg Three Li” (a Li is a measure of distance equaling about a third of a mile), because stimulation of the point, particularly with moxibustion, allows a fatigued person to go another three Li. Zusanli is also sometimes called 下氣海 Xiaqihai (“Lower Sea of Qi”) It implies that this point may have an effect comparable to Qihai (REN 6). [4] Zusanli is also a vital point that is kicked in order to weaken the leg. 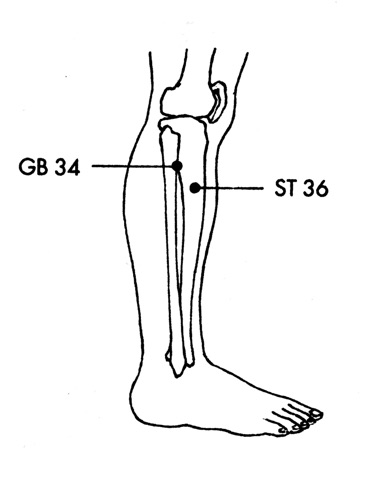 Shousanli, or Arm Three Li is comparable to ST 36. It is an energizer point for the arm. Pressure on this point can relieve pain in the shoulder and arm, and give the arm more energy to keep going. Shousanli is also a vital point that is commonly attacked in martial arts. Striking this point can cause temporary paralysis of the arm, because it is a point where the radial nerve can be accessed. 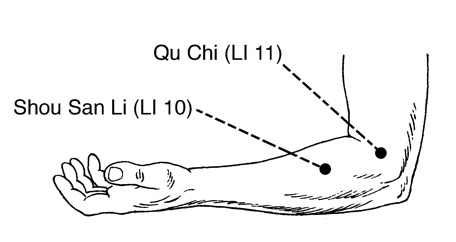 Sanyinjiao, on the inside of the lower leg, is a point where the three leg yin meridians (Spleen, Liver and Kidney) intersect. Because this point promotes the functioning of the three yin leg channels, all of which meet n the abdomen, it is an important point for abdominal pain, and digestive issues, as well as and gynecological problems, such as Dysmenorrhea. In the martial arts, this point is a target for low kicks, as a blow here weakens the leg. 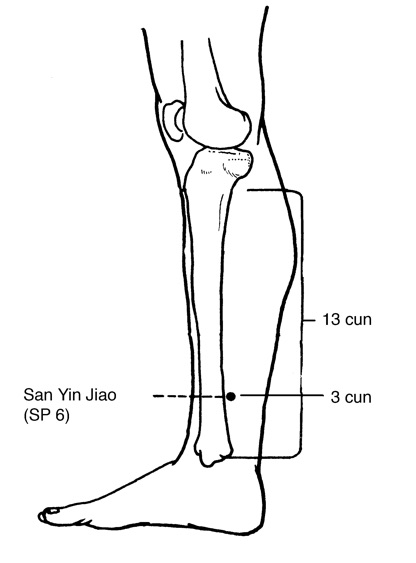