My observation is that a lot of martial arts practitioners begin to learn about points and then quickly give up, because the science of acu-points seems like a difficult and insurmountable task. This usually happens because one attempts to memorize the points out of the context of practical application, or because one attempts to learn the points on a meridian, or group of meridians, all at once.

Another difficulty is that there are multiple approaches one can take to learn about acu-points: health, self defense, meditation & Nei Gong, and treating disease. If one attempts to engage with all of these applications at the same time, it makes learning difficult.

The approach suggested here is to start with 20 acu-points that give an internal martial artist global insight into the energetic workings of the body during the practice of Nei Gong and internal forms. From this perspective, the only meridian pathways one needs to know are the circulation of the Du Mai and Ren Mai, which are two channels running on the centerline of the body, back and front, respectively. These 20 points have many functions, so by learning them you are engaging with many different applications of the points: from Nei Gong and self-defense to health and healing.

Once you know these 20 key acu-points and understand their various uses by sensing them internally during your daily practice, it is easier to go on and learn others. You do not need to know all the acupuncture points – there are hundreds of acu-points if we include points that are not on meridians. Most acupuncturists do not know all the points, and even if they do, the average acupuncturist probably uses 40-60 points most of the time. These are usually the points that consistently produce clinical results and more importantly, the points the individual acupuncturist has a certain resonance with, points that they have a certain “sense” about.

Start by reading about a few points and then see if you can sense what is happening at those points as you practice your forms and exercises. Or try acupressure on some of them to promote health and healing. Develop your own feeling about the points and begin to “know” them viscerally from the inside-out, rather than as a series of dots on a two-dimensional picture.

You will need a book that helps you locate the points. There are many. I suggest Mark Tedeschi’s book Essential Anatomy for Healing and Martial Arts. It is inexpensive and is a good starting point. Almost any point can also also be looked up online and there are free PDF downloads of acupuncture points available online, so you do not need to buy an expensive textbook. Each of the 20 points below will be accompanied by a picture. Detailed instruction about location can be found in books or online.

Huiyin, on the Ren (Conception) Vessel, is the meeting point of Du Mai, Ren Mai and Chong Mai, and is the gathering point of yin Qi in the body. Huiyin lies anatomically opposite Baihui DU 20, on the Du (Governing) Vessel. Baihui is the gathering point for the yang qi of the body. Huiyin is in the center of the perineum, while Baihui is on the top of the head.

Guanyuan, the “Pass of the Origin” is also called Dantian (“Cinnabar Field”). This is the point on the front of the body that corresponds to Mingmen, the life gate, where the original yang has it root. This area is connected internally with Qihai (REN 6) and both are often referred to as the Dantian, either singly or collectively. Breath and Qi gather and are stored in Guanyuan and Qihai during the practice of “Kidney Breathing.” This acu-point promotes health and strengthens the kidneys particularly when moxibustion is employed. 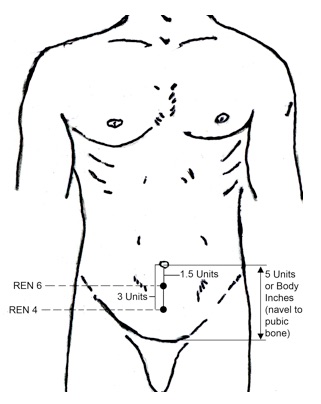 Qihai, a point on the Ren (Conception) Channel, is also known as 下氣海 Xia Qihai (“Lower Sea of Qi”). Breath and Qi gather and are stored here during the practice of Kidney Breathing. Qihai is sometimes referred to as the Dantian. This acu-point promotes health and can strengthen the kidneys particularly when moxibustion is employed.

Danzhong is also known as Shang Qihai (“Upper Sea of Qi). The first character (Dan) is also sometimes Romanized as Shan. Qi and Breath gather here because it is a meeting point of Qi and of several meridians: the Spleen (foot Taiyin) channel, Kidney (foot Shaoyin) channel, Sanjiao (hand Shaoyang) channel and Ren Mai. The pericardium, the sac that wraps the heart, lies right behind this point. It is an attack point that can damage the heart if hit with sufficient force, and fractures to the sternum in this area are dangerous. Many of the movements in internal martial arts are done in such a way that this point is protected. 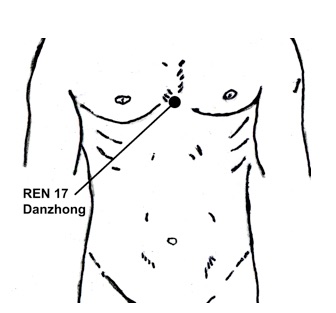 Changqiang, a point underneath the tip of the coccyx, has many names. Common names for Changqiang in Daoist texts are Guiwei ((Tortoise Tail”) or Weilu (“Tail Gate”). DU 1 is the starting point of the Du (Governing) Channel, where the kidney yang energy emanates outward, extending itself along the Du Channel. Since the Governing Vessel controls the yang of the body, this point effects the body’s strength and vigor. Some sources say that needling this point will make the penis “long and strong.”[1] In martial arts, this acu-point is a vital point that must be protected. A hard kick to this point can do great damage to the body. 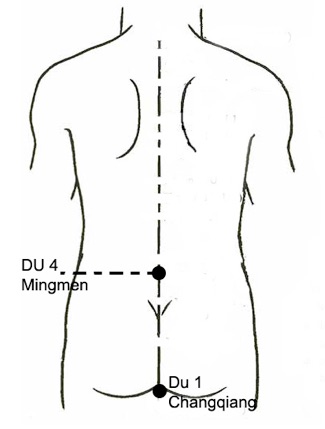 Mingmen, The Gate of Life, is located between the kidneys and is sometimes called “the moving Qi Between the Kidneys.” Yang energy connects and gathers here. Although the “Life Gate” (Mingmen) is actually inside the body, the Mingmen acu-point is a major acu-point for directly accessing the Life Gate. Often Moxibustion is applied to this point to activate and strengthen the Mingmen. Mingmen has a direct connection with Dantian. They are essentially one entity with two expressions. The Mingmen is said to “dominate all twelve channels.” In Kidney Breathing, one is breathing directly into Mingmen. In the neijia, internal movement emanates from Mingmen and its connection with the yongquan points on the bottoms of the feet.

Dazhui can also mean “Big Vertebrae.” It is located below the most prominent of the Cervical vertebra. Dazhui is a meeting point for all of the six yang meridians and Du Mai. It acts a hub for Qi and Breath entering or leaving the head and neck, and also for the movement of Qi and Breath into the arms. It is a place where Qi can block in Microcosmic Orbit Circulation. 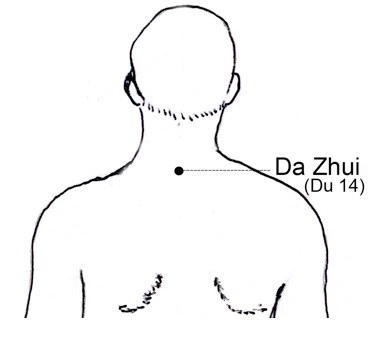 Fengfu is a point where wind can enter the body, leading to colds, stiff neck and even numbness of the head and face. In acupuncture, DU 16 is also used to treat wind disorders. DU 16 is just below DU 17 Nao Hu (“Brain Door”), also called Yu Zhen (“Jade Pillow”). Yang Qi rising along Du Mai enters the brain through this point. In Daoist meditation and Micro-cosmic Orbit Circulation, the area between DU 16 and DU 17 is one of the places where Qi easily blocks. In the internal arts and in Qi Gong and Nei Gong exercises, one of the functions of the fundamental postural alignments is to keep this point open so that Qi and Breath can enter the brain unobstructed. DU 16, and the area at the base of the skull in general, are susceptible to vital point strikes that shock the brain. Fengfu is particularly susceptible to chopping and shearing strikes. 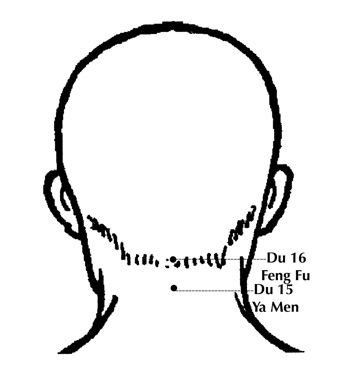 Baihui is anatomically opposite REN 1 (Huiyin) in the perineum. Baihui is a place where yang converges and gathers, while Huiyin is a gathering or collecting point for the yin. The yang vessels and Du Mai all meet at Baihui. Other meridians like the Liver Meridian of Foot Jueyin also have internal pathways that connect to Baihui. As the highest point on the body, Baihui has a direct connection with the energy of Heaven (yang). In this sense, Baihui is in energetic opposition to KID 1 (Yongquan), which is on the bottom of the foot and connects directly with Earth (yin). When practicing Nei Gong or Zhan Zhuang exercises, one of the basic goals is to foster the rising of the “clear yang,” which leads to a sensation of Qi and Breath gathering at Baihui. It is a point where the “hundred spirits are also said to converge. [2] 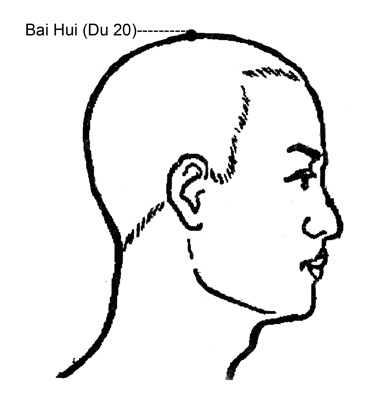 Shuigou is also know as 人中 Renzhong (“Human Center”). The name of the point describes the location and appearance of the point in the philtrum, the ditch or trough below the nose. This point is where Qi and Breath, moving through Du Mai, enter the mouth to connect with Ren Mai. DU 26 is a very strong point, famous for its ability to revive someone even if they appear to be dead. It is used as revival point in cases of shock, fainting and heart attack. Like many revival points, it can also be used to knock someone out. A hard strike to DU 26 with one knuckle or a chop can cause unconsciousness 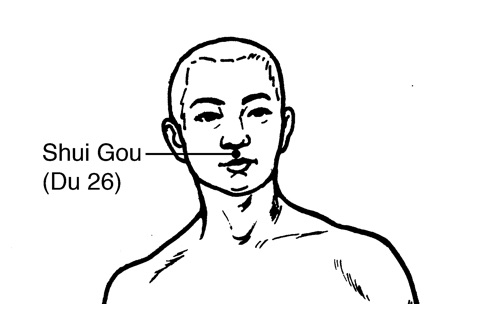